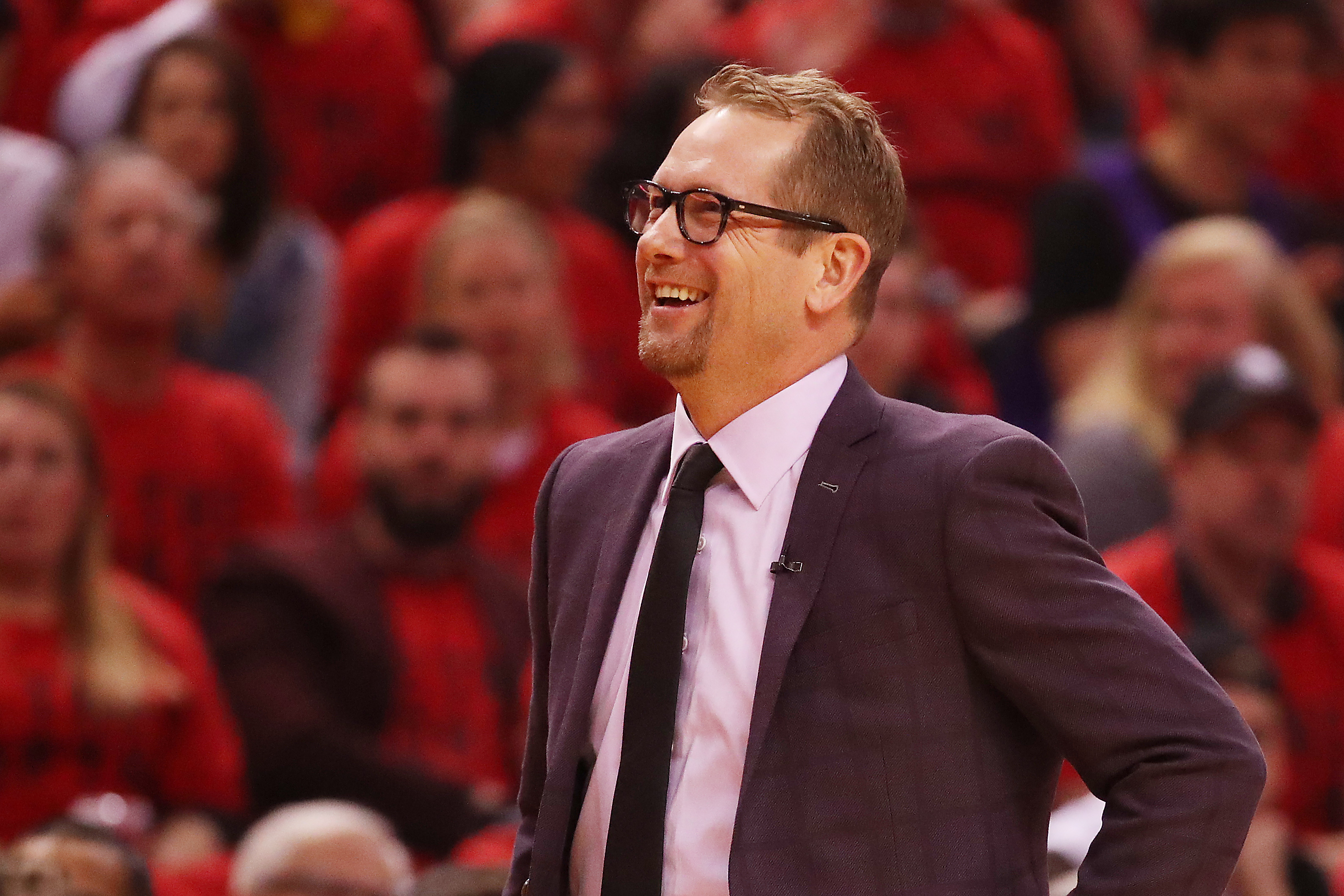 After years in the Minors, Toronto raptors’ coach Nick Nurse proved it’s never too late to get your big break.

The “minors” have always fascinated me. It’s the equivalent of sports limbo where very talented athletes but maybe not elite ones disregard the odds and chase a dream. One of my best friends spent two years in pro tennis in the late ’70s, earning meagre money and finally crashing mentally after blowing his potential big break, a two-set lead against Ilie Năstase in the Wimbledon opening rounds.

A long-ago junior hockey player I know, now in his 60s, recalls an invitation to the Detroit Red Wings camp, which led to an offer to be a backup goalie for the minor-league Oshkosh Aardvarks. “I decided I didn’t work this hard to be an Aardvark,” he said.

And then there’s 52-year-old Nick Nurse, the rookie coach of the underdog NBA ChampionToronto Raptors (and consequently, now a god who walks among us, tasked with performing more underdog miracles next season with the loss to free agency of franchise player Kawhi Leonard). His 30-year career saw him coach 15 basketball teams in five countries, including the British league where he was first hired on the condition he both play and coach. He would coach five teams in Britain and one in Belgium in arenas that may have held fewer people than the local church. The fact that he won consistently in these places that were barely noticed in “the bigs” would have hardly registered without the work he put into each next step. From accounts, he repeated his belief that he would one day be an NBA coach. The erstwhile slow-moving three-point shooter from the University of Northern Iowa would be an assistant coach at two universities, a coach at one and spend 11 years coaching in the boneyard of broken hoop dreams that was basketball’s D-League (now the G-League).

There’s a school of behaviourism, popularized by the sociologist Erving Goffman, called The Looking Glass Self. It basically says we tend to become what we’re told we are. If you’re told repeatedly you’re stupid, you will believe it. Constant validation will produce self-confidence.

The D-League wasn’t a place that fostered belief. Full of shifting rosters and players with unfulfilled potential always on the verge of falling off the ladder, it took a special kind of determination to pull oneself up from this vulnerable career point.

Not surprisingly, self-belief was a big part of the championship team that has made Nurse a legend. The Raptors’ win against the Golden State dynasty has been examined from countless angles (not least of which is the sore-loser “asterisk” argument that blames a series of Warrior injuries for Toronto’s win).
But not enough has been said about the almost-Hollywood aspect of this underdog story. The 2018-19 Raptors were marked by the contributions of players with D League experience — key among them Pascal Siakam, who was all arms and legs and potential but still a question mark in his rookie year. In the championship, he became almost an extension of the team superstar Kawhi Leonard, a go-to pass target when Leonard would be double- and triple-teamed.

Another playoff hero, Fred VanVleet, wasn’t drafted by an NBA team because he initially refused to play in the D League for a salary of $20,000. After signing a summer league deal with the Raptors, he agreed to D League assignments and played on the development league championship team with Siakam in 2017.

In the NBA Finals, VanVleet played like a man possessed, blanketing Golden State’s Stephen Curry, and in the deciding Game 6, scored 22 points off the bench with five three-pointers.

Even The Man, Kawhi Leonard, without whom it’s understood there would be no Raptors championship, was the 15th pick in the 2011 draft. Arguably the best player in the NBA today, he was deemed less promising than 14 other draftees. Much to the chagrin of Raptors fans, Leonard proved he could control the game off the court as well, deftly orchestrating a behind-the-scenes deal to play in his hometown with the Los Angeles Clippers.

Nurse, who spent his whole career with something to prove, has reached the top of the game, inspiring players with something to prove. He was originally chosen as an assistant coach by Raptors president Masai Ujiri, who has demonstrated the same ethos, and who has had the guts to go for a title with a superstar they might have for only one year and a team of mostly low-ranked draft picks.

Nurse has gone from a career-journeyman coach to a god who walks among us. A guitar god no less. A few weeks after the championship, he showed up on stage with the Arkells, shredding it on Toronto’s Budweiser Stage. (There hasn’t been a guitar-playing coach in the city since the late Leafs’ boss Pat Burns jammed on “Brown Eyed Girl” with the Good Brothers in the early ’90s.)

There’s even a shrine to Nurse at the corner of John and Wellington streets, outside the office of the digital design firm One Method, which created it.
Fittingly, St. Nick has signed on as coach of Canada’s men’s basketball team in advance of the 2020 Olympics. While cheering the fact that an NBA Championship coach might attract actual Canadian stars for the first time in years (I’m looking at you, Andrew Wiggins), there is also the fact that the Canadian team is, and always has been, loaded with players with development league experience and untapped potential.

Currently ranked 23rd by the International Basketball Federation, Canada pulled off a first-time silver at the Pan Am games in Toronto in 2015. I saw them beat the Dominican Republic at the Mattamy Centre — the former Maple Leaf Gardens — in a game filled with sloppy play and occasional flashes of startling talent.

The workhorse players on Team Canada may never again have a coach like Nick Nurse, who understands where they are and where they want to be. And if they want to get there, he has shown them the way as effectively as Google Maps.