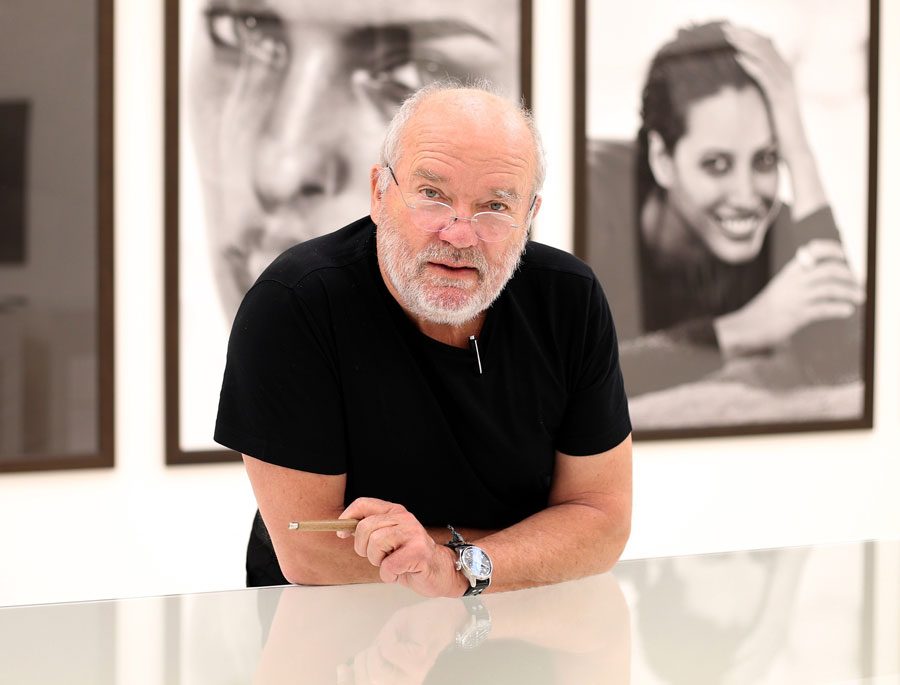 Esteemed fashion photographer Peter Lindbergh, who is credited with facilitating the rise of the supermodel, died at age 74 on Tuesday.

“It is with great sadness that we announce the passing of Peter Lindbergh on September 3rd 2019, at the age of 74,” the post reads. “He is survived by his wife Petra, his first wife Astrid, his four sons Benjamin, Jérémy, Simon, Joseph and seven grandchildren. He leaves a big void.”

Born in Germany, Lindbergh helped launch the supermodel craze of the ’90s, accelerating the careers of Naomi Campbell, Kate Moss, Linda Evangelista, Cindy Crawford and many more. He was known for his atmospheric black and white images that made these burgeoning models iconic. Perhaps the most influential of these was the British Vogue cover of a group of the bourgeoning supes laughing and in white shirts. Tim Blanks, the Editor-at-Large of The Business of Fashion, perhaps describes the photographers work best in an obit published on the fashion website.

“Peter Lindbergh made extraordinary, enduring images of women,” Blanks writes. “It was their mystery that absorbed him, and his career-long effort to solve it for himself left us with one of fashion’s greatest image banks.”

Setting the prolific photographer apart from his counterparts was his focus on highlighting the natural qualities in his subjects and his firm stance against re-touching. “It should be a duty for every photographer working today to use his creativity and influence to free women and everyone from the terror of youth and perfection,” he wrote in his 2018 photography book Shadows on the Wall.

As news broke of the beloved photographer’s death, those who worked with him in front of and behind the camera lens took to social media to pay tribute. Included in the chorus of tributes was a message from Meghan Markle, the Duchess of Sussex,  who got to know Lindbergh in both capacities. Most recently, he shot her guest-edited Forces for Change issue of British Vogue, which featured 15 influential woman including Jane Fonda, Yara Shahidi, Christy Turlington Burns, Greta Thunberg and New Zealand Prime Minister Jacinda Ardern.

The message was accompanied by a photo of Lindbergh embracing the Duchess.

“Honouring the life and work of photographer Peter Lindbergh,“ the Instagram post from the Sussex Royal account read. “His work is revered globally for capturing the essence of a subject and promoting healthy ideals of beauty, eschewing photoshopping, and preferring natural beauty with minimal makeup.

“There is no other photographer she considered to bring this meaningful project to life. ‘Forces for Change’ was the one of the esteemed photographer’s final published projects. He will be deeply missed. ”

Back before she was the Duchess of Sussex, Lindbergh photographed Markle for the cover of Vanity Fair. At the time, Lindbergh made an impact on the young actress with his aforementioned affinity for highlighting natural beauty.

“I gave him a big hug and said, ‘I am so excited to work with you because I know we will finally be able to see my freckles!’” Markle recalled saying to Lindbergh during her interview with Vanity Fair.

While several tributes mentioned his talents, several of his former subjects also remembered him for his warmth and kindness.

Charlize Theron shared a photo of the two of them together, writing, “My heart is broken. Peter Lindbergh was a genius and an absolute master of his craft. But beyond that, what made him truly one of a kind was his consistent kindness, warmth, and incredible sense of humor. One of the best human beings I have ever met. I will never forget you, my friend” Canadian supermodel Linda Evangelista posted a throwback photo of her and Lindbergh with a short caption that read “Heartbroken, RIP my Peet.” Diane Kruger joined the chorus of tributes, sharing a photo that Lindbergh shot of her.

“We collaborated many times over the years and he’s taken some of my favorite portraits,” she wrote in the post. “He was full of life, always enthusiastic and had an easy smile on his face. He loved women and created some of the most iconic images of our time. Adieu Peter, it was great knowing you.”