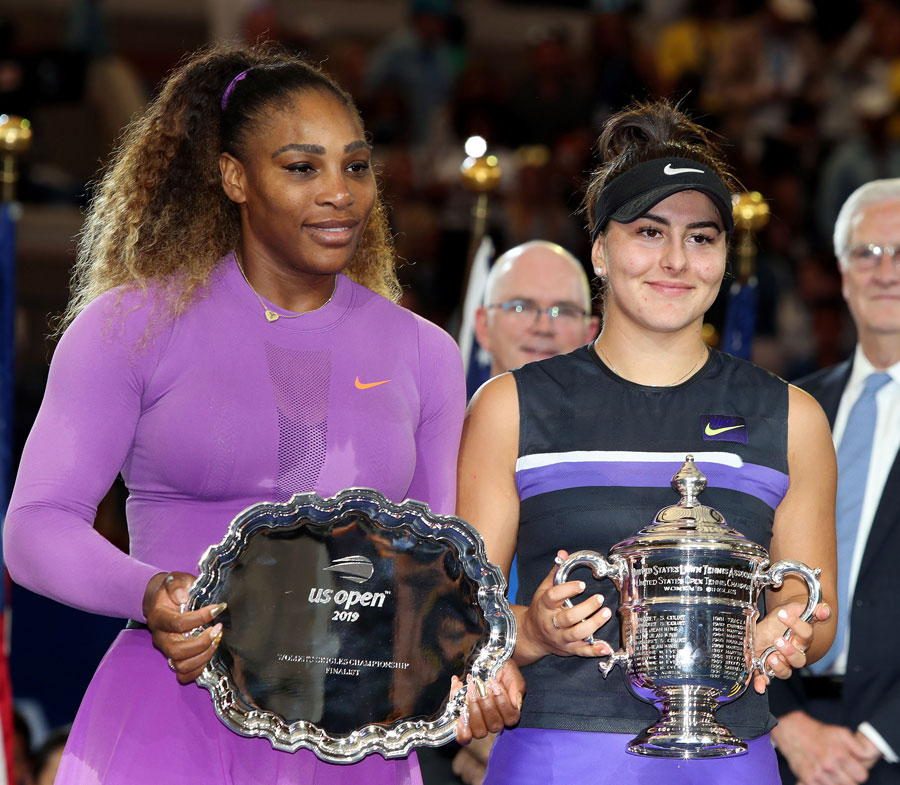 Serena Williams of the United States and 2019 US Open champion Bianca Andreescu of Canada standing side by side during the trophy presentation. (Photo: Marek Janikowski/Icon Sport/Getty Images)

Bianca Andreescu won the U.S. Open this past weekend in such convincing fashion that many fans are wondering whether Serena Williams is too “old” to win another major tennis tournament.

Not only did Andreescu, the 19-year-old Canadian sensation, crush the greatest women’s player of all time in two sets (6-3, 7-5) to win her first Grand Slam title, but she showed holes in Serena’s game that just didn’t exist before.

The title of World No. 1 is a designation that Serena has held for much of her career since she burst on the scene, winning the U.S. Open in 1999 (one year before Andreescu was even born.)

For the next two decades, Serena used a combination of speed, power and savvy to pile up victories, beating all the top women’s players (including sister Venus) on her way to being considered the greatest tennis player of all time.

But Serena has shown signs of slowing lately. She hasn’t won a grand slam event in two years. And at the U.S. Open on Saturday, despite a game challenge in the second set, in the end she fell without taking a set from Andreescu.

Now 37 (ancient in tennis terms) and a veteran of 22 years on the tour, Serena might be running into the wall that many fellow athletes encounter — age. It’s almost painful to watch top players encounter their mortality. While their experience and savvy remain unmatched, these traits are no longer enough to defeat younger, stronger challengers. We cheer them on expecting them to play like 19-year-olds forever. But she’s not 19 and the cumulative effect of injuries (not only did she roll her ankle at the U.S. Open but back spasms forced her to withdraw from the Rogers Cup and a recurring knee injury flares up sporadically to hamper her play) at some point, both fans and athletes must accept the reality that the game is passing them by and most of their greatest moments lie in the past.

While Serena is still a top player, as every Grand Slam goes by without her lifting the trophy, she must feel in her heart that her reign is coming to an end. Time is running out in her quest to become the women’s all-time singles slam holder — with 23, she’s one behind current leader Margaret Court.

And not only is the Women’s tour stacked with healthy competition but there are also four big age-related factors at play working against her quest.

Tennis, like boxing, is sports at its purest. It’s a match between just two people with the victory going to the stronger, faster, savvier and more intense competitor. In other sports, football for example, it’s easier for a 42-year-old athlete like Tom Brady to continue to excel. Unlike tennis, there are 21 other players on the football field whose play determines the outcome. The New England Patriots can still win even if Brady doesn’t bring his A-game. And while another great older athlete, 43-year-old Tiger Woods, certainly earned his win at this year Masters, it was largely a result of the absolute collapse of his competition. In tennis, Serena has to be at the top of her game for every match in a tournament. One slip up and she loses — and there are no other teammates or stumbling opponents to help her out. She’s all alone out there.

A baseline player, Serena has dominated opponents with a wicked forehand and backhand. Andreescu and other young stars on the tour are fast enough to get to these shots and strong enough to power winners past Serena. And because the old champ’s reflexes and foot-speed have diminished, she’s just not able to get to those shots. Her recent Grand Slam losses have come at the hands of Andreescu, Naomi Osaka, Angelique Kerber and Simona Halep, all of whom grew up idolizing Serena and mimicking her style of play. They’ve learned their lessons well and are beating Serena at her own game. That must sting more than she’s letting on.

Andreescu and the other top players on the tour won’t say it out loud but they just don’t fear Serena the way almost every player on the Women’s tour used to. This point was illustrated at the U.S. Open when Serena began her second-set comeback. Despite the fans cheering wildly for Williams, Andreescu didn’t succumb to fear and fall apart in a quivering mess. Instead, she knew that victory was within her grasp and relied on mental toughness to regain the upperhand and crush the comeback. Andreescu et al may still respect Serena, but they certainly don’t fear her. That’s a significant edge.

While Andreescu and the other young stars are completely focussed on tennis, Serena has a busy off-court life. Besides spending much of her personal time with her two-year-old daughter Alexis Olympia, Serena is immersed in multiple fashion-related initiatives, neither of which Andreescu nor the other young tennis stars have to contend with.

All of this being said, while Serena may not be as dominant as she was in her prime, she’s still playing well enough to make Grand Slam finals. And though she may not scare the competition like she used to, she’s still a top player with amazing skill, immense pride and an incomparable drive to be the best.

I believe she will rediscover her game and be  “more Serena” in future tournaments. And I’m betting she’ll prove the skeptics wrong, overcome all these age-related factors and go on to win 24 slams.