Meet Jeanne Socrates, the Oldest Solo Sailor to Sail Around the World at Age 77 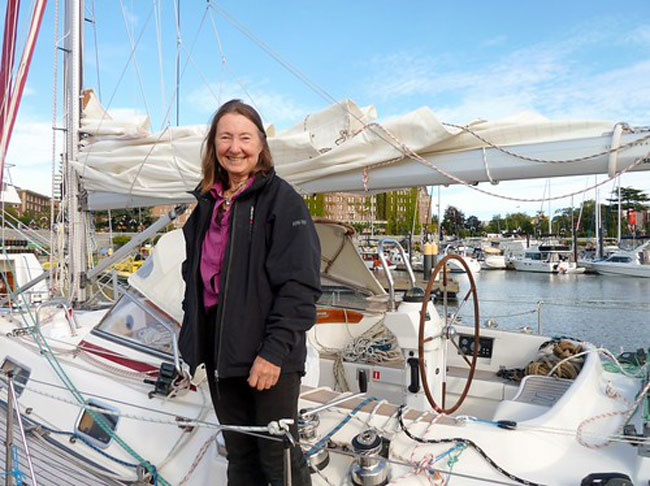 On the same day that 19-year old Bianca Andreescu made history at the U.S. Open, showing fierce determination and strength, a 77-year woman also made history as the oldest person to sail around the world solo, completely unassisted, under sail alone and without setting foot on land until completing the circuit.

Talk about fierce determination and strength!

(And yet another record was set on Friday, according to doctors in India, when a 73-year-old woman in India reportedly gave birth to healthy twin girls by Caesarean section, after IVF treatment; whether that is something to celebrate is open to debate.)

But certainly to be celebrated is the amazing feat of Jeanne Socrates of Hampshire, England, who sailed triumphantly into the harbour of Victoria, British Columbia on Saturday after setting a new world record with her 320-day voyage.

She was already the oldest woman to make the trip, completing it in 2013 when she was 70 years and 325 days old.

But she wasn’t satisfied with that and wanted to surpass the record set by Minoru Saito, who was 71 when he completed the journey in 2005.

During the latest challenge, her 38ft (11.5m) boat, Nereida, suffered a ripped mainsail during a storm, which she repaired en route,  and its solar panels were lost overboard.

All this despite the serious injuries she sustained two years ago.

In 2017, she fell off her boat on to concrete at dry-dock and broke her neck and ribs.

“She was not in the best physical shape when she left,” said her friend Steve Illman, “but she managed, she survived this journey and repaired that boat against great odds and we are amazed by her resourcefulness.”

A flotilla of boats accompanied her during the final moments of the voyage and hundreds more people lined the breakwater and harbour to welcome her back to her starting point.

She was pampered, deservedly, on her first night on dry land in almost a year.

Socrates told Chek News: “The wind gods have not been with me. Two cyclones off Hawaii to avoid and I’d already had a cyclone in the Indian Ocean to avoid — I wasted a week with that.”

She added she had received lots of messages of support from the public. “I think they like the fact that I’ve persevered and overcome so many problems on the way around, and that I show it can be done,” she said.

In her blog before she left on her journey from Victoria on Oct. 3, 2018, Socrates wrote:

“I expect to be at sea for around 7-8 months nonstop, hoping to get safely around the Five Great Capes of the Southern Ocean and back to my starting point without any outside help and without using my motor (which will be sealed).

“I’ll post daily blogs to my website and I’ll be talking each day to people on land around the world using my HF/SSB radio, which I use for emails and weather info as well — so I shan’t be quite alone!

“If any problems arise (and they usually do!), I’ll have to deal with them using tools & spares I’ll carry onboard … and all food for my time at sea will need to be with me from the start of my journey — fresh eggs turned daily should last several months, onions and potatoes most of the way, and I’ll also have canned and dried foods.

“Drinking water will come from a water-maker (desalinator) working off my batteries and I’ll have long-life milk and fruit juices as ballast! My batteries will be mainly powered by the sun and the wind, with a backup generator to help on windless, overcast days and/or when I’ve used the radio a lot.

“I’ll do my own weather routing using my radio to get the information — weather files will come as email attachments and weather faxes will come direct from onshore transmitters located beside whichever sea area I happen to be in.

“It’s useful to know when a storm is expected — they’re very frequent over a good part of my route — and in planning my route I’ll try to stay out of both calms and storms and in favourable wind as much as possible.”