Trudeau a No-Show; Scheer, Singh and May Joust in First Leaders Debate: Let’s Grade Them 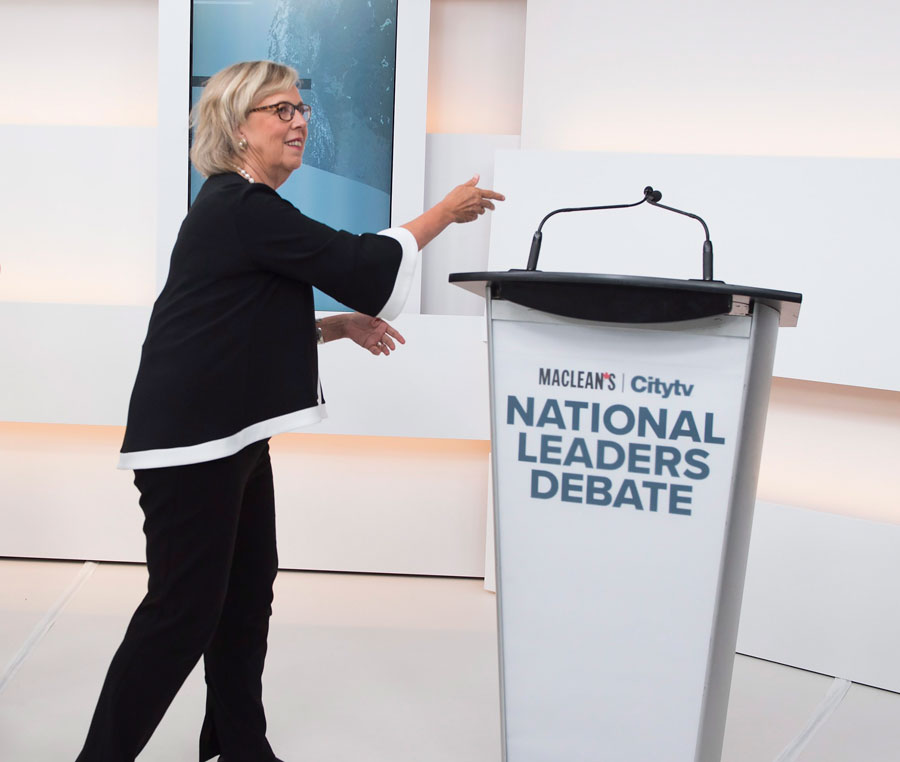 Before the leaders debate, the Green Party's Elizabeth May pretends to shake hands with an invisible Justin Trudeau, who declined an invitation. (Photo: The Canadian Press/Frank Gunn)

Last night was our first chance to watch Andrew Scheer, Jagmeet Singh and Elizabeth May share their campaign messages and show off their oratorical skills, as the three jousted in the Maclean’s/Citytv National Leaders Debate. (If you missed it, you can watch it here.)

Noticeable by his absence was Prime Minister Justin Trudeau, who chose to skip the event to hold a campaign rally in Edmonton. An empty podium marked his putative spot, which prompted some joking (before the debate May shook hands with the invisible Liberal leader) and a lot of unanswered criticism about the Libeal leader’s mishandling of SNC-Lavalin and pipelines.

But the Prime Minister’s no-show prompted the one point of consensus the entire evening when Scheer said: ” I think we can all agree that Justin Trudeau is afraid of his record and that’s why he’s not here tonight.”

The debate itself was a typically Canadian affair, with the three combatants taking polite shots at each other but no one really going for the jugular. The overall experience wasn’t helped by the low production values, marred by shaky cameras that lingered too long on one leader, even when another was speaking.

And while moderator Paul Wells gamely tried to get the leaders to stick to the question at hand, for the most part they simply ignored his questions and squeezed off completely irrelevant sound-bytes they’ll no doubt post on social media. Besides the leaders dodging direct answers, there was the usual frustration that whenever a leader was making a point worth listening to, it was inevitably drowned out by gabbling from the two others.

All said, it was a good chance for the leaders who showed up to introduce themselves to voters, reinforce their messages and hone their debating skills. Let’s recap how each leader performed.

Scheer, standing in the middle podium, attempted to project the image that he was the most Prime Ministerial of the three, the only candidate capable of guiding the economy and creating jobs. Because he didn’t have much to gain from sparring with Singh or May over the environment or indigenous issues, he mostly took the high road and let the others talk it out. In a strange twist, Scheer didn’t want to attack Singh or May because he needs them to do well in the election. Unless the NDP or Greens poll well, the Liberals will waltz into an easy re-election. That’s why, of all the leaders, Scheer devoted much of his speaking time launching attacks on Trudeau for SNC-Lavalin and the Liberal party’s out-of-control spending. While he accomplished his goal of convincing voters he was the big fish out there, he didn’t exactly distinguish himself otherwise. His lack of charisma was on full display — too often he stood their shaking his head morosely instead of countering over-the-top accusations made by Singh (on the Conservative immigration plan) and May (who compared him to a ventriloquist’s puppet controlled by Trump). As well, Scheer’s rather annoying habit of ignoring the moderator’s questions in order to rhyme off a canned attack on Trudeau made it seem like he was dodging questions. In the end, however, he limited any damaging blows and excoriated Trudeau’s record, which were his goals going in.

May did an admirable job injecting herself into the debate, even controlling issues like foreign policy and the economy which are not Green strengths. She certainly projected herself as the leader of a viable party, which was her goal going in. But even though she scored well for her debating skills, she simply couldn’t disguise the fact that the Green’s vision seems driven by ideology and not reality. May endorsed major spending programs, like universal minimum income for all, a national drug plan, free university tuition and an expansion of health care. And she promised to end our dependence on fossil fuels by 2030. She didn’t, however, explain where the money would come from to pay for these expensive promises, especially if the massive revenue and countless jobs the oil sector provides is removed from the equation. Instead, she promised millions of new “green” jobs, but didn’t specify what form these would take. Ultimately, while she performed very well in the debate, her grading was hurt simply because her spending promises seem too out of sync with reality.

With the NDP cratering in the polls, Singh had the most to gain last night and he largely held his own. It was a chance for the NDP leader, who has been nearly invisible on the national scene, to finally show the country his political chops. For the most part, he achieved this, by conveying the message that his party would not be beholden to corporate interests. (Although he did go too often to his mantra of standing up for the little guys.) But beyond building more affordable housing and espousing head-to-toe health-care coverage, he offered vague or non-existent promises. For some reason — perhaps because the Greens and NDP have so much in common — Singh refrained from attacking May, which was an odd strategy considering that the parties are battling for the same voters. Singh’s overall performance was okay but his insistence on attacking Scheer instead of May was a big blunder and certainly didn’t help the NDP achieve its objectives.