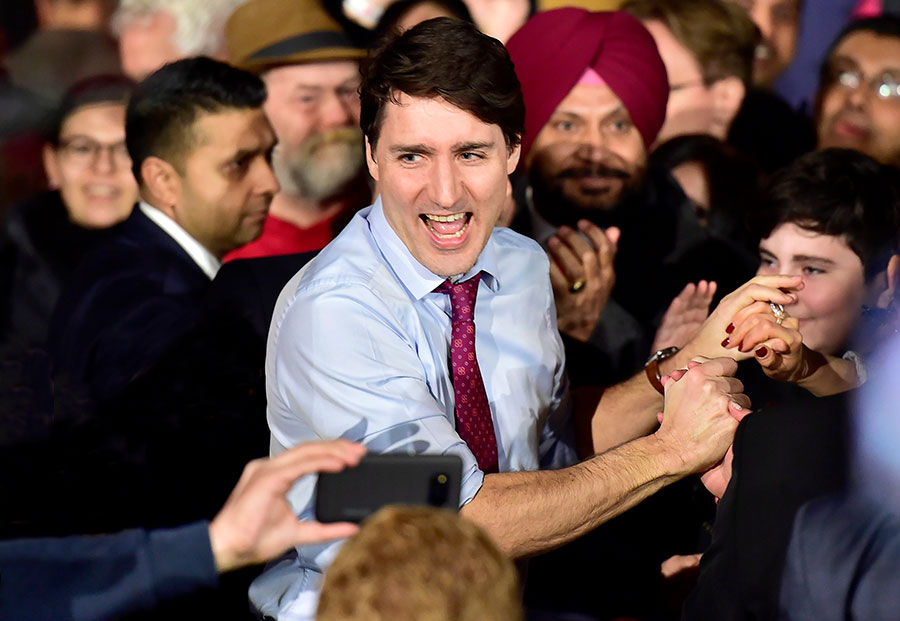 It’s an age-old question we revisit every campaign season — does the politician with the most charisma inevitably win the election?

More than good looks, superior eloquence or a heightened sartorial sense, charismatic leaders radiate a seductive mix of energy, charm, humour and intelligence, an overall attractiveness that we can’t help but be dazzled, whether we share their politics or not. They command our attention and capture the media’s focus — two objectives you’d think would always put them over the top come election time.

With that in mind, let’s breakdown the charisma ratings of each of our federal election candidates.

It goes without saying that Trudeau is the most charismatic of the group. Not only has Mr. Sunny Ways used his movie-star good looks and GQ stylings to vault him to global celebrity status, but he’s a beast on the campaign trail, using a frenzy of energy to pump up even the quietest crowds. Besides being incredibly amped up, Trudeau still manages to exude warmth, whether he’s charging into rallies with a big smile, posing for selfies or dashing into a local Tims and dishing out hugs, high fives and handshakes all around. It all comes off as spontaneous, exciting and real, until it doesn’t — the SNC-Lavalin scandal showed a different sort of person than you see on television. No matter, this video of Trudeau preparing for a rally is something to behold. (Note the manic expression on his face.)

The Conservative leader is the polar opposite to Trudeau when it comes to both charisma and campaigning. A big, bearish fellow,  his body language seems all wrong, and that unfortunate smirk — which he’s worked hard to eliminate — doesn’t help. (To his credit, Scheer poked fun at himself, comparing Trudeau’s “yoga body” to his “dad body.”) Conservative media handlers have so far resisted efforts to make him more “charismatic,”  accepting the reality that while he’ll never match Trudeau’s flash, his low-key common-sense vibe works well in smaller or corporate gatherings. The photos below (much derided on social media) perfectly capture their candidate’s awkward, arms-length approach to meeting “regular folks.”

While Singh is new to the campaign trail, the early results have been promising. He trails only Trudeau in the energy level he brings to rallies and streeters. The only visible minority leader, he unapologetically mixes style with culture, matching bespoke suits with colourful turbans chosen by his wife Gurkiran Kaur Sidhu. Second only to Trudeau in style, Singh was described by GQ  as looking “the way you hope a progressive politician would.” On the campaign trail, Singh has shown courage while working small-town Quebec, refusing to apologize for wearing a turban in a province that bans religious symbols among public-sector workers. Plus, his unusual habit of disarming hecklers by hugging them is unique and, so far, rather effective.

On the campaign trail, May mixes effortlessly with the voters she meets in rallies or working the streets. Energy-wise, she’s not in the same league as Trudeau or Singh, but she comes off as a person who is comfortable in her own skin, which certainly showed in the first leaders debate. May has an open, cheerful sensibility that always reads authentic and plays well in one-on-one exchanges. And because the other leaders tend to take themselves a bit too seriously, she likes to have a bit of fun — those rare moments of humour on the campaign trail go a long way.