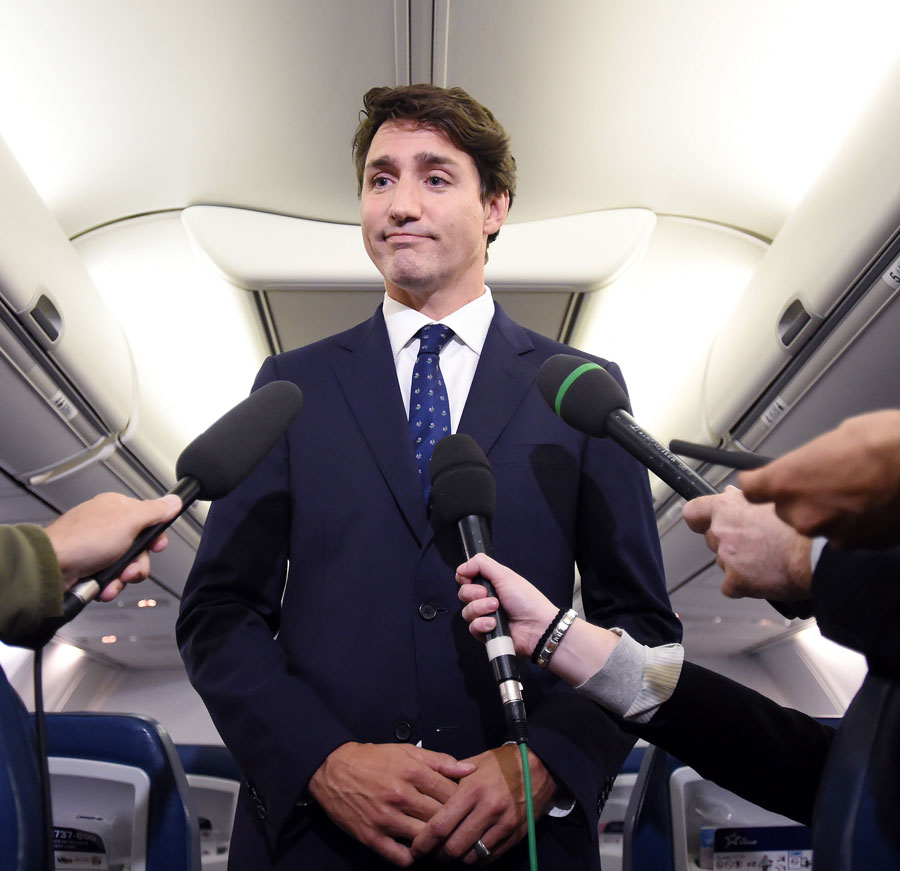 Liberal Leader Justin Trudeau makes a statement in regards to photo coming to light of himself from 2001 wearing "brownface" during a scrum on his campaign plane in Halifax, N.S., on Wednesday, September 18, 2019. THE CANADIAN PRESS/Sean Kilpatrick

Prime Minister Justin Trudeau is under severe fire tonight as a photo of him appearing in brownface makeup has gone viral on the internet, causing shock and outrage in Canada and around the world.

Time magazine was first to publish the offensive photo, which was taken in the spring of 2001 while Trudeau was teaching at West Point Grey Academy in Vancouver. Trudeau, then 29, was pictured in a high-school performance of Arabian Nights dressed as Aladdin, wearing “a turban and robes with his face, neck and hands completely darkened.”

Trudeau later admitted that he also took part in a talent show wearing black makeup while at high-school. A third video of him appearing in blackface has also surfaced.

Speaking to reporters on his campaign plane, a haggard- looking Trudeau issued an apology. “I shouldn’t have done it … I’m deeply disappointed … I should have known better.” He also added, “I didn’t consider it a racist action at the time.”

Trudeau addressed the photos and footage again at an event in Winnipeg, expressing deep regret and admitting he should have known better.

Here is a video of an emotional Singh commenting on Trudeau’s picture.

In a statement made in Sherbrooke, Que., Conservative leader Andrew Scheer said he was “extremely shocked and disappointed” when he heard the news of the racist photo. Adding that the Prime Minister is “not fit to govern this country.”

Green Party leader Elizabeth May tweeted that she was ” deeply shocked by the racism shown in the photograph.”

Despite a frenzy of criticism on social media calling for his resignation, Trudeau has, so far, made no mention of stepping down.