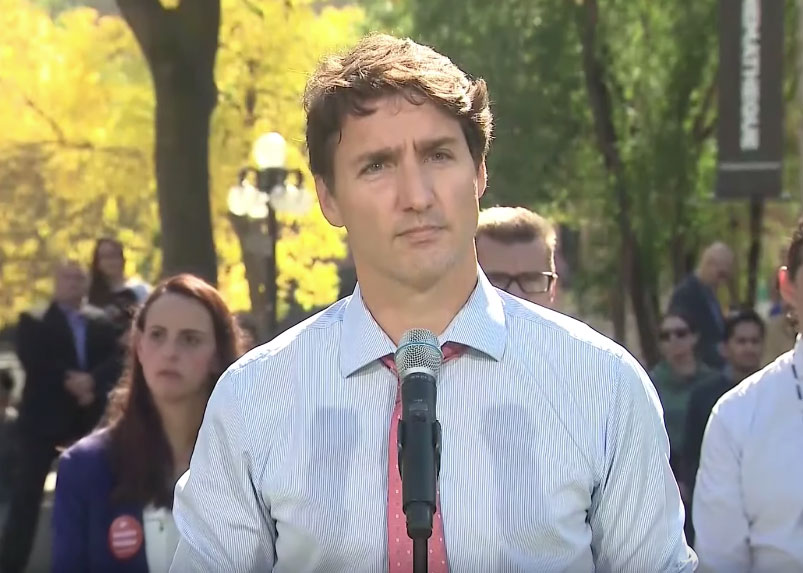 Trudeau held a town hall in Saskatoon on Thursday night, where he continued to apologize and face questions on the controversial brown- and blackface images that have surfaced from his past. He reiterated to the 500 attendees that, “What I did was inexcusable and wrong and hurt a lot of people who considered me to be an ally and that was wrong. And I am deeply, deeply sorry.”

Trudeau has also made public the fact that he is planning to call NDP leader Jagmeet Singh and personally apologize for his actions. Singh, who called the photos “insulting,” told CBC Radio that he was is very troubled not only by images but also what they reveal of the Prime Minister. “This pattern of behaviour shows someone who humiliates people who are suffering. It makes fun of people who are going through pain. And that’s something that Canadians are legitimately asking questions about.”

“Layers of privilege,” is how Justin Trudeau answered the first question about why he appeared multiple times in brown and blackface as a young man.

Facing reporters in Winnipeg on Thursday, less than 24 hours into the racial scandal that has upended his campaign and called into doubt his political future, Trudeau called his actions a “blindspot” saying, “I never had to understand or live the type of discrimination that people live in their daily lives.”

Apologizing directly to racialized Canadians, acknowledging that he had caused hurt, he stated, “darkening the skin, regardless of the context and circumstances is always unacceptable because of the racist history of blackface.”

When asked pointed questions about why he is not stepping aside and if there were any more such incidents in the past, Trudeau repeatedly deflected them, finally concluding that he didn’t know. “I shared the events that I remember,” he said. This vague response left the impression that he gave little thought to the implications and consequences of his actions. It also raised the possibility that there might be more photos apart from those already made public, stemming from two separate events documented in school yearbooks and a video of unknown provenance (but confirmed to be him).

Seemingly unscripted, Trudeau offered a fulsome and unequivocal apology, saying he was “blind to the pain that I may have caused at those times and that I am now causing to people that count on me to defend them.” He also corrected the apology he made last night aboard his campaign plane, when he called his actions “putting on makeup.” Attempting to nuance the situation, today he called it the more emphatic (and correct) “blackface.”

Surrounded by a small coterie of supporters, Trudeau’s political chops were on display as he switched the focus from defending his actions to his record from the time he entered politics. When asked when he learned that brown and blackface was wrong, he pointed to his experience working with his constituents in Papineau (the diverse Quebec-based riding he’s represented since 2008), saying how they face “extraordinary challenges and extraordinary discrimination” every day.

“What I did hurt them. I hurt people who shouldn’t have to face intolerance and discrimination because of their identity,” he said. “In my political career, and certainly as Prime Minister, I have taken many concrete actions to fight against racism and intolerance … that exists in Canada.” He said that the choices he made hurt people “who thought I was an ally,” adding that “I am an ally.”

It was not quite Obama’s famous “A More Perfect Union” speech on race (delivered during the Rev. Jeremiah Wright “God Damn America” controversy and widely credited with saving his 2004 campaign), but there were definite moments he elevated the discussion into a teachable moment for himself and the country. “Even in a great country like Canada, there’s still a lot more work to do.”

It’s been a long, strange journey since Time magazine broke the story last night. When People’s Party of Canada leader Maxime Bernier gets the opportunity to steal the moral high ground from Justin Trudeau, the political world has been completely turned upside down.

That’s the bizarre reality Trudeau has created. Until yesterday, his effortless fluidity in interacting with other cultures has been a huge political asset for him. In the early days of his political career, a video of him dancing the Bhangra while wearing cultural dress at an event went viral, earning him acclaim as a multi-cult hipster, a progressive torchbearer for Millennials both in Canada and around the world.

But it was a bridge too far when he tried to replicate that moment on his ill-fated visit to India in 2018 where he bizarrely appeared in national dress (verging on costume ) at business and political events.

In retrospect, this may well have been the first crack in his well-crafted image of political correctness, although at the time it was dismissed as a tone-deaf ploy at trying to stave off Jagmeet Singh’s ascendancy as a  media darling after he was elected NDP leader, the first person of colour to lead a national political party in Canada. With issues of national security breaches overriding this cultural appropriation, Trudeau’s behaviour in India was mocked at home and abroad, but the political price is now being paid.

What really stands out about this debacle — apart a modern-day Canadian leader having to admit to racist actions in his past — is the insensitivity piled on callous disregard. Not only did Trudeau cavort in brown and blackface, but he carried on in his career blithely refusing to address these incidents, knowing full well that there was a record of it.

He claims he did not inform his cabinet or advisors because he was so embarrassed by the incidents. It seems an incredible oversight by such an able politician that he did not come forward when he first entered the political arena or ran for the Liberal leadership or won the nomination or  led his party to victory in 2015. This plays into his political Achilles heel revealed by the SNC-Lavalin scandal — Brand Trudeau is not as trustworthy and transparent as marketed.

Moreover, eight days into the campaign and with the Liberal Party on a recent spate of “cancel culture” takedowns — revealing the problematic and racist sins of Conservative candidates’ past — how did he not think these photos and videos of him would not surface? It seems turnabout is fair play.

Either it was due to Trudeau’s political hubris brought on by his aforementioned personal privilege and belief in his own brand, or he simply misread a cultural shift that had taken place after the 2016 election of Donald Trump.

The actions of this historically divisive President who, despite trafficking in both misogyny and racism, still won the highest office in the land, lanced a cultural boil that provoked an outburst an activist-anger powered by social media. The message was clear: behaviour that was previously deemed acceptable would now be called out.

Unlike Trump, however, Trudeau has positioned himself as being the “woke” side of almost every progressive pillar — notably race relations — so this will be hard for his supporters to swallow.

Not helping matters are the pious reactions by Andrew Scheer and Bernier, which come across as manufactured outrage meant to demean their opponent. Singh’s moving statement — in which he chose not to politicize the moment — stands out in contrast. His heartfelt message was meant to reach out to those who have been personally hurt by racism, not to score political points. While Scheer and Bernier jumped on the bandwagon to seize the moral high ground, Singh actually walked it.

Can Trudeau recover from this massive blow to his credibility? There was a moment in today’s press conference when the old “Sunny Ways” Trudeau returned. (Even today’s sun-dappled setting evoked memories of his walk to his swearing in when he first uttered that phrase.) Like a fighter who withstands a flurry of punches, he suddenly regained his mojo . You could see the energy, optimism and enthusiasm that usually punctuates his campaign stops. His eyes lit up, his body language improved and his confidence returned as he began talking about campaign promises and improving the world.

Yes, both Trudeau and his polished brand have been bruised and battered.  But I wouldn’t write his political epitaph just yet.