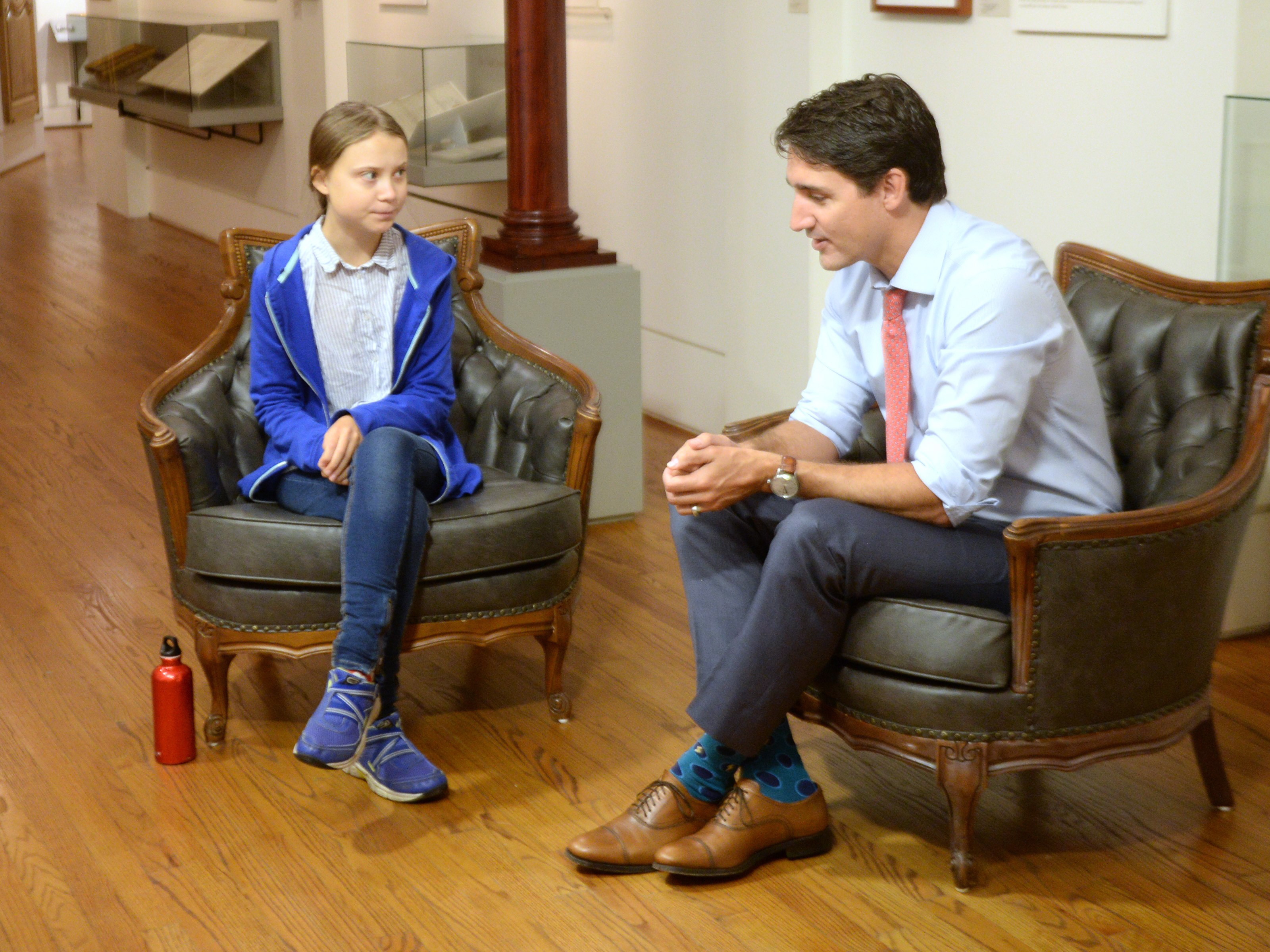 This Friday, hundreds of thousands of Canadians skipped school and work to hit the streets for the national Climate Strike, and Swedish enviro-star Greta Thunberg will join them in Montreal. Prior to taking part in the protest, Thunberg  sat down with Prime Minister Justin Trudeau to (a marked contrast to Donald Trump’s snub of Thunberg at the UN Climate Summit) to share her message to all politicians: “just listen and act on the current, best available united science.”

The 16-year-old is coming off a momentous week where she floored a global audience at the United Nations Climate Action Summit in New York with her emotionally charged “How Dare You” speech.

Besides delivering her dynamic speech at the UN Summit, Thunberg joined 16 young people from around the world in filing a legal complaint about climate change to the United Nations Committee on the Rights of the Child. Their petition claims that five countries — France, Germany, Turkey, Argentina and Brazil — knew about the danger of climate change but continued to promote use of fossil fuels instead of imposing carbon emission limits.

Her presence here is a welcome show of support to demonstrators, not only in Montreal but across the country, says Madeline Laurendeau, a 17-year-old, Grade 12 student at Collège Jeanne-Sauvé in Winnipeg.

“Having Greta here unites us all,” says Laurendeau, who will cut class on Friday to join Winnipeg strikers as they  march to the Manitoba Legislature. “Her work is so inspiring — she’s the reason most of us got into this movement.”

The Sept. 27 demonstrations are part of the Global Climate Strike movement, which is sending a message to politicians and businesses that “we need to act right now to stop burning fossil fuels and ensure a rapid energy revolution with equity, reparations and climate justice at its heart,”  Larendeau says.

Among the major aims of the strikers is to force governments to:

But as youth try to school their elders on the importance of taking swift action to avert an environmental crisis, are we — specifically our political leaders — listening?

Laurendeau, for one, doesn’t think they are. “It’s a crisis. No one is taking it seriously. The science is out there. We are on the brink of experiencing environmental events that we cannot recover from,” she says. “There’s no point in us going to school if you are not going to promise us a future.”

However, she predicts our leaders will start paying heed, especially after the strikers start shaking things up. “Having this much noise and disruption in the streets will make politicians realize that there’s a big problem and that they need to act.”

Her message to older Canadians is more encouragement than blame: “You didn’t necessarily destroy the planet, but you should also be taking on the responsibility to fix it. And if you haven’t been involved yet, there’s still time.”

The Canadian climate strike will come a week after similar school walkouts took place around the world on Sept. 20, the first day of the UN Climate Change Summit. It’s estimated that four million people took part in demonstrations, with 270,000 in Berlin, 100,000 in London, 200,000 in New York and 100,000 in Melbourne.

Set to coincide with the wrap-up of the UN summit, the Canadian global strike has also received support from sympathetic schools, teachers, unions and corporations that are changing their normal routines to make it easier for climate-change strikers to hit the streets.

Dawson College in Montreal, the province’s largest CEGEP, has cancelled classes Friday to allow students and staff to attend local demonstrations. According to Dawson College spokesperson Christina Parsons, the board of governors approved the move in June. “The entire college — administration, staff and students — is united on this issue,” she said. “It’s clear that something needs to be done.” Parsons noted that it ties in well with one of the school’s core values of sustainability.

Many students share the college’s passion for the environment. “We are students who care about our school, our community, our city, our country, and our planet,” says Laura Krochenski of the Dawson Green Earth student club. “We are rising for it all, and we want our voices to be heard.”

A host of universities in Quebec are augmenting Dawson’s efforts. Ten universities (excluding McGill) have agreed that there is a climate emergency, signing an international declaration to “increase the number of enivronmental and sustainability-related academic programs” and become carbon neutral by 2050.

And school boards across the country have asked teachers not to schedule any tests Friday to accommodate students who want to attend the Climate Strike. The BC Teachers’ Federation website posted an announcement saying it was supporting the protests by encouraging provincial school administrators to excuse students from class.

Even businesses are getting in on the act, with environmentally conscious stores like outdoor recreation company Mountain Equipment Co-Op (MEC) and organic cosmetics retailer Lush both announcing they will close their stores to allow staff to participate.

RELATED: Open Letter from a Gen-Z Climate Striker: “We Are Acting Like Adults Because No One Else Is”

Even before the Climate Strike caught the world’s attention, climate change had already become a hot-button issue in the 2019 federal election. So it makes sense that all Canadians should inform themselves on the various policies and promises that each federal party is offering to heal the environment. The following are highlights from each of the four major parties.

Elizabeth May’s Green Party offers the most aggressive platform to protect the environment and address climate change. Dubbed Mission Possible, it operates on the principle that we’re in the midst of a climate crisis that demands immediate action. The Green plan includes :

The NDP offers a robust package of environmental promises that it believes will “fight the climate crisis, defend our land, air and water, and create 300,000 clean energy jobs.” The NDP plan includes:

The Liberal government has not unveiled their full environment program, but will run on their record of  “fighting climate change, creating good middle class jobs, and leaving a healthier planet for our children and grandchildren is up to all of us.” The Liberal plan includes:

In its Real Plan to Protect the Environment, the Conservative Party promises it will require companies to reduce carbon emissions. Unlike the other parties, however, it will be offer tax incentives rather than penalties “to reduce emissions at home, conserve and protect our air, land, water and wildlife, and take our fight against climate change global.” The Conservative plan includes:

Open Letter from a Gen-Z Climate Striker: “We Are Acting Like Adults Because No One Else Is”