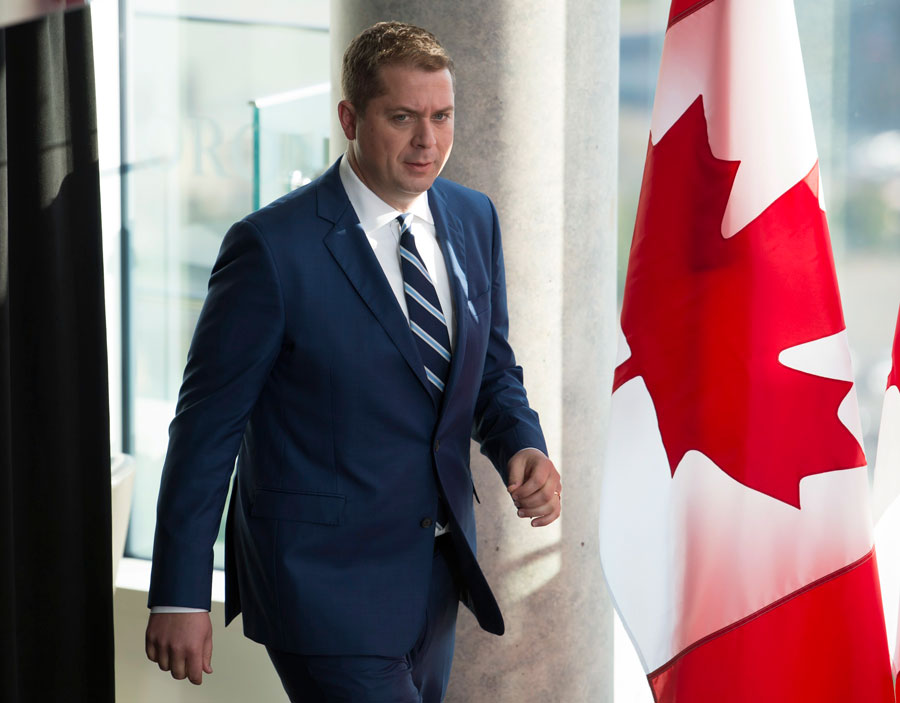 It was another eventful week for the five leaders on the 2019 campaign trail as Andrew Scheer was criticized for ignoring the Global Climate Strike.

Trudeau, though,  continued to spread the wealth, Elizabeth May unveiled another “quirky” policy suggestion, Jagmeet Singh scored a poet’s endorsement and Maxime Bernier’s  supporters scuffled with protesters at an event in Hamilton.

Scheer skips out on Climate Strike

Conservative leader Andrew Scheer spent the weekend taking flak for skipping out on the student-led climate strikes that took place across the country on Friday. While fellow leaders were scoring juicy photo ops marching alongside the kids (Justin Trudeau and Elizabeth May were both on hand for the massive showing in Montreal, while Jagmeet Singh joined the strikers in Victoria), Scheer was in B.C. making infrastructure-related announcements to reduce commute times, which included replacing the aging George Massey Tunnel outside Vancouver and expanding Toronto’s subway system. Trudeau called out Scheer for declining to participate, accusing the Conservative leader of “choosing to hide today instead of participating in climate marches.”

Liberals down with deficits

Justin Trudeau continues to roll out his party’s expansive — and expensive — new spending promises. According to the Liberals’ newly released platform, these promises would see spending skyrocket over the next few years, almost doubling the deficit to $25 billion by 2023. The new pledges include: a new $6-billion investment in healthcare; a $286 tax cut for those earning less than $150,000 per year; a 15 per cent increase in the Child Care Benefit for children under one; a $1,200 increase in post-secondary education grants; a 20 per cent increase to EI and the list goes on. To (somewhat) offset these costly programs, Trudeau has promised he’ll tax the tech giants (Facebook, Apple, Amazon, Netflix, Google) and impose a 10 per cent tax on luxury purchases (cars, boats, planes) over $100,000. In the 2015 election campaign, Trudeau was the only leader who dared utter the word “deficit.” Looks like he’s rolling out the same strategy again.

Green Party leader Elizabeth May had an excellent week that concluded with a massive show of support for her party platform by many Climate-Striking students. While her environment platform has lifted her party in the polls, May is still having trouble gaining traction for some of her non-environmental policy offerings. She started the ball rolling in the Macleans-Citytv national leaders debate when she floated the idea of penalizing SNC-Lavalin for its legal sins by forcing the engineering company to work on national infrastructure projects at cost — an idea Singh called “ludicrous.” And yesterday, May offered another unusual suggestion, this time promising that, if elected, the Green Party would impose a “robot tax,” which would force companies that replace an employee with a robot to pay income tax equivalent to that of the laid-off worker. May’s quirky policy planks have drawn mockery by opponents on social media, earning her the nickname “Dizzy Lizzy.”

While campaigning in Burnaby, B.C., on the the NDP’s plan to reduce gun violence by promoting after-school activities, leader Jagmeet Singh landed an endorsement from Rupi Kaur, an Indian-born Canadian poet whose work has landed her on the New York Times bestseller list. Kaur told the audience that she first fell in love with the NDP’s vision for a better world when she volunteered for the party as a teenager. “Jagmeet makes people feel visible,” Kaur said at the event. She closed her talk by declaring her endorsement of Singh, claiming that he will speak up for you “no matter what what colour, what age, what gender or what class.”

A campaign stop in Hamilton for Peoples Party of Canada leader Maxime Bernier turned rowdy after a group of protestors attempted to block people from entering the building where the event was being held. As PPC supporters began showing up, a scuffle broke out and four people were eventually arrested for “breach of peace” before the event even got underway. Calling PPC supporters “Nazi scum,” one protestor said wanted to let Bernier know that “hatred has no place in Hamilton.” A group of masked protestors even blocked an elderly woman using a walker from entering the building.