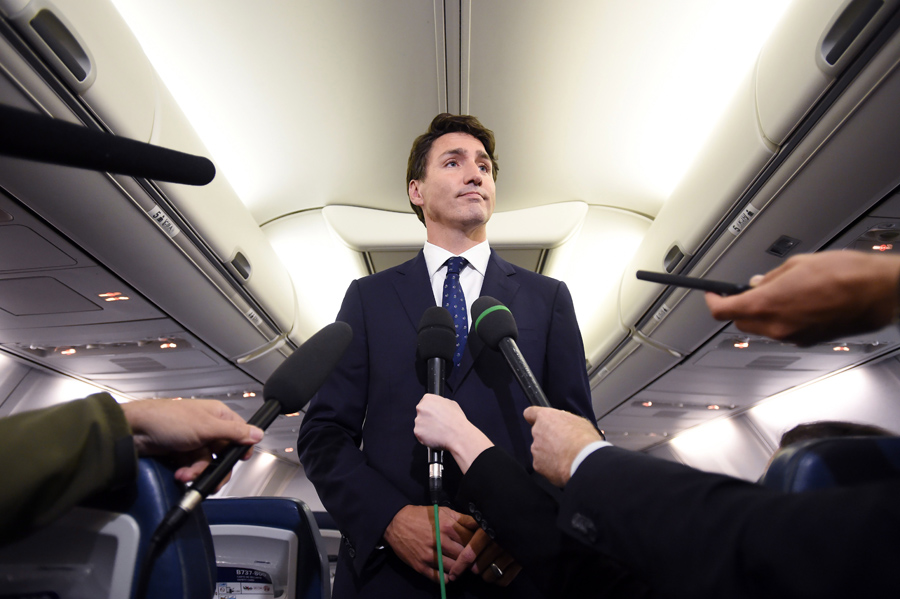 Liberal Leader Justin Trudeau makes a statement in regards to photo coming to light of himself from 2001 wearing "brownface" during a scrum on his campaign plane in Halifax, N.S., on September 18, 2019. THE CANADIAN PRESS/Sean Kilpatrick

Andrew Scheer has that smirk. Trudeau comes off as smarmy. As the party leaders head into the all-important English-language debate on Monday, two body-language experts consulted by Zoomer explain how there is far more to the heated exchanges than meets the eye.

Faith Wood, a Vernon, B.C.-based body-language expert who runs a communications consulting company called  Inspiring Minds, says viewers should watch closely for non-verbal cues that Trudeau, Scheer, Singh, May and Bernier display when they face difficult questions. If their physical gestures don’t seem to match what’s coming out of their mouths, then there’s probably something suspicious about their answers.

Justin Trudeau’s evolving responses to his brownface and blackface scandals provide the perfect opportunity to understand why body language has become so important in today’s political arena.

Cast your mind back to when Trudeau first addressed the issue on his campaign plane. What I remember from that night was how his face was haggard, his jaw clenched, his shoulders slumped and he couldn’t make eye contact with reporters.

Re-watching that infamous moment, Wood says my first impressions were correct — Trudeau’s body language was not in tune with his apology. When the Liberal leader was trying to express remorse for hurting and betraying Canadians, Wood says, “his head shakes ‘no’ even though he’s trying to say ‘yes.’”

But did anyone catch that? Perhaps not on the surface, but Wood says we likely registered it subconsciously. “Viewers saw that Trudeau’s gestures were not in harmony with what he was saying. And when there’s a lack of harmony, we get the feeling something’s not quite right.”

By the time Trudeau made his second apology in Saskatoon, Wood observed that his body language had greatly improved. Over the course of a few days, he had practised his explanation and was now comfortable with it. By following scripted talking points and exhibiting stronger body language, Wood suggests that Trudeau successfully imparted a whole new message: “Yes, I made a mistake. We all make mistakes.” And many of us absorbed this, convincing ourselves: “Yeah, I made mistakes too.” That, Wood says, is the power of good body language.

Tricks of the trade

That’s why successful politicians must be skillful actors as well as speakers. When addressing the public, they’ll delve into their toolbox of non-verbal tactics — hand and facial gestures, rhythmic body movements and speech tempo — to either construct their message or to reinforce to voters that they’re reliable, credible and authentic.

“When politicians  try to persuade us about a platform or a promise, the audience is constantly evaluating them for their level of sincerity,” says Wood. How their platform is received depends on how they’re perceived — it’s not simply the words but also the delivery that ultimately informs our impressions.

Because most politicians are polished orators who mask their emotions behind practiced poker faces, Wood says debate-watchers should look at the whole body to  judge their sincerity. When answering difficult questions, sincere speakers project confidence through their stance — they will have their shoulders squared and feet firmly planted. But if, like Scheer trying to explain his exaggerated insurance credentials or dual citizenship, they’re rocking back and forth, wringing their hands, raising their eyebrows, pausing while talking or even pointing their feet to the nearest exit, they’re subconsciously telling us they’re under stress and want to get the heck out of there. The eyes will also tell the tale, says Wood. Are they maintaining strong eye contact with the questioner? Are their eyes in harmony with their smiles? “If the eyes light up, the speaker is being real.”

While non-verbal cues shed light on a politician’s sincerity, they’re also powerful tools in triggering impressions in voters, says Mark Bowden, a Toronto-based human behaviour and body-language expert who runs a company called Truthplane and author of Truth and Lies: What People are really Thinking.

Working with Fortune 500 CEOs and politicians, Bowden coaches clients to manipulate their messages through non-verbal communication. He says politicians know that voters often “distort, delete, alter, change or make up” their message in order to make it agree with their own perception. For example, if a politician is saying something joyful but he or she looks angry while doing it, we’ll ignore the words and focus on the non-verbal cue for anger.

Bowden calls this a “theory of mind,” instances when we build a framework of people based on the non-verbal messages they’re constantly giving off. Trudeau, he says, has a speaking style that many voters read as smarminess. Likewise, Scheer has a smile that looks like a smirk, so the public feels he must be smug. We may not know either of these statements to be true, but as long as we perceive it to be so, the damage is done.

Bowden worked closely with former Prime Minister Stephen Harper, preparing him for his first televised debate. Harper won the election in 2006 but it was largely due to the Liberal sponsorship scandal. Because of this, Bowden didn’t feel the public was entirely sold on him as a leader.

So in the 2008 leaders debate during Harper’s first re-election campaign, Bowden focussed on re-making Harper’s image and projecting to Canadians that he was indeed prime ministerial. “I wanted to trigger into people’s heads that this guy was calm and assertive, that he looked and sounded like a prime minister. We got that result.”

Debate goals for each leader

With the 2019 leaders debate upon us, I asked Bowden to size up the top four candidates, assessing not only their body language but what message they’ll want to “trigger” in our minds.

Justin Trudeau: “Right now, Trudeau has a very hurried, anxiety-inducing rhythm. [Because of the brownface and SNC-Lavalin scandals] he’s not really able to look people in the eye. When answering a question, he will look off to the side. And he’s not working very well off script — he tries to jam a lot in, very, very quickly. It’s not what he’s saying, but the rhythm and tempo in which he’s saying it that’s causing anxiety to voters. During the debate, I would suggest Trudeau will try to come off a lot calmer. And he’ll probably be able to pull this off, largely because he’ll be better scripted.”

Andrew Scheer: “What we’ve seen in his recent news appearances is that he’s moved to a sense of seriousness. He’s gotten away from that smile — which some people easily turned into a smirk. I think the only way he wins this election is if Trudeau loses it, so part of Scheer’s game is figuring out how to let Trudeau lose. What he’ll try to do is mitigate the bias people have against his smile by projecting that he’s become more serious. Another smart move for Scheer would be to play on the feelings of disappointment and shame when he talks about Trudeau. Because it’s disappointment and shame that will cause Trudeau to lose the election.”

Jagmeet Singh: “I thought Singh delivered a brilliant performance when the news came out about Trudeau’s brownface incident. He came across as a calm and assertive leader. He was sincere and emotional and played on the feelings of sadness and shame — in effect, he became an avatar for those who had been hurt. If he can pull out a performance like that in the debate, he’ll be able to strip votes away from the Liberals.”

Elizabeth May: “What springs to mind with May is her entertainment value. She’s quite funny. That was great piece of non-verbal entertainment she pulled off in the first debate (when she shook hands with an absent Trudeau). It was very entertaining and very honest — she went up to shake hands with a ghost! The most important thing in a debate is to stand out, get seen and listened to. She used humour to achieve that. May would do well to continue pushing that quite quirky style and let it play out. A little levity never hurts, especially when the focus of her agenda can be overwhelming and emotionally exhausting.”

While both Wood and Bowden recognize how compelling body language can be, neither of them feels leaders debates are all that useful for voters.

“The problem with the debate,” says Wood, “is we that we give the leaders the questions in advance. If we could ask them an unexpected question, the time it takes their brains to process the question and come up with a response, this gap is where the body language is crystal clear. It’s not the line that comes later.”

Bowden feels that if voters want a true picture of the leaders, they should listen more closely to what they’re saying than their non-verbal techniques. “Nowadays, we see so many images and videos of the leaders but we don’t necessarily hear their words,” Bowden. “Ideally, the best way to judge what a candidate is putting forward is to switch off images and just listen to the words.”