Beyond Spectacle, Do Canadian Federal Election Debates Serve a Purpose? 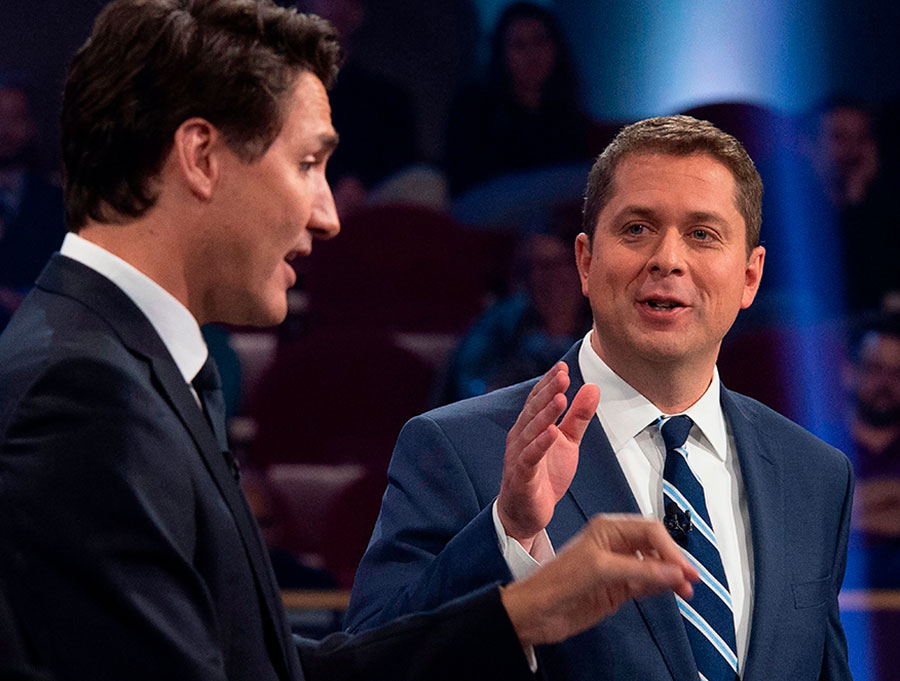 Conservative leader Andrew Scheer and Canadian Prime Minister Justin Trudeau during the Federal Leaders Debate at the Canadian Museum of History in Gatineau. Photo by Sean Kilpatrick/POOL/AFP via Getty Images

In a way, election debates are like UFO sightings. It’s hard to get everyone to agree on what they saw.

The Quebec media I scanned begged to differ. “I can confirm, Jim, it was a train wreck,” Marc-Andre Lussier of Montreal’s La Presse told me via Twitter. “Not a single media (outlet) in Quebec calls him a winner. Quite the opposite.”

’Twas ever thus, going back to the most famous election debate of the last century, in 1960, when U.S. radio listeners thought Nixon trounced Kennedy, and TV viewers said, “I’m voting for the handsome guy.”

So, if people are going to see and hear what they want to in debates, why do we continue to put ourselves through exercises like Monday’s clusterfutz with six party leaders and five media interlocutors (plus questions from ordinary Canadians)? With each response delivered in increments of seconds (often with the candidates talking over each other), the whole thing came off like an angry speed-dating session.

Bloc Quebecois leader Yves-François Blanchet seemed to openly wonder what he was doing there from the first question. Maxime Bernier’s People’s Party of Canada is a made-up party that has yet to receive a single vote. Jagmeet Singh’s NDP could be a player in a minority government and merits participation, but I think Elizabeth May’s Green Party was represented because many people like her and keep hoping for the party to break out electorally.

It’s worth noting that Canada came to the whole “debate” thing late, in 1968. And that at the time there were worries that three candidates were too many (Liberal Pierre Trudeau, Conservative Robert Stanfield and NDP leader Tommy Douglas). A fourth debater, Social Credit leader Real Caouette, was brought in like a guest star for the last part of the debate.

The event was such a roaring success that there wouldn’t be another Canadian federal debate for 11 years.

And yet, for what it’s worth, a federal debate is the closest thing we have at home to an actual personal glimpse of the candidates outside of the airbrushed image they present in election ads. That’s notwithstanding the fact that Prime Minister Justin Trudeau has apparently memorized those ads and appeared at more than one point to be reciting them word for word (ironically suggesting that he may indeed be “as advertised”).

The second reason to watch is the possibility of seeing that fabled creature, the “knockout punch” — that point when a candidate goes off script and either self-destructs or delivers a rhetorical body blow that turns an election around. It happens, though, that you could lose fingers in a sawmill accident and still have enough left on that hand to count all the knockout punches in Canadian federal debate history.

The one that people remember most vividly came in 1984 when Liberal John Turner defended the patronage appointments he inherited from his predecessor Pierre Trudeau, saying he had “no option.” Conservative candidate Brian Mulroney came back with his angry “You had an option, sir,” response that probably cemented a majority government for the Tories. It is such a unicorn moment in Canadian debate mythology that Conservative strategist Jason Lietar is quoted in a video on CBC’s politics website saying, “Every time I want inspiration for a debate, I watch that clip.” Undoubtedly, genuflection is involved.

I remember almost as vividly the elder Trudeau debating the hapless Joe Clark, repeatedly chuckling, shaking his head and saying simply, “Joe.” They were powerful debate jabs with a minimum of effort.

Compare that with the drama our American neighbours often bring to debates. In 1988, Democrat Michael Dukakis, at the time in a dead heat with George H. W. Bush in presidential polls, fielded an opening question from CNN’s Bernard Shaw, “If Kitty Dukakis was raped and murdered, would you still oppose the death penalty?” Perhaps over-prepped on the issue, Dukakis responded, essentially, “Yes, I would, Bernie. And here’s why…” A non-robotic response might have been, “Seriously? That’s your opening question?” His unemotional response to this provocation went a long way toward cementing Dukakis’ image as a wonk and to his eventual defeat.

Another reason why federal debates are a less natural fit for Canadian politics is that we don’t vote for the people on the debate stage. We vote for MPs who represent their parties. Many people “vote locally” and, for entertainment value, a typical riding debate has any federal one beaten by several kilometres. A friend in Oakville, Ont., said he was attending a candidates’ debate because “I know the federal leaders. I’m going to this debate to see whether any of the local candidates are lunatics.”

My own experience includes a Central Toronto riding that is typically Red (Liberal) versus Orange (NDP). Before the debate, the Marijuana Party candidate and the Conservative could be seen behind the community centre smoking a joint (because, what the heck, why not?). I’m reasonably certain the Liberal candidate was drunk.

It’s worth comparing the media landscape in the Trudeaumania debate of 1968 with 2019. Back then, a nationally televised debate involved CBC and CTV, the only two networks on offer and, sans cable, the only things you could see on a video screen. Unless you turned off the TV and cracked open a book, you could not escape it.

Today, there are countless other non-debate options, which means the people motivated to watch the entire federal debate are often the most committed of political junkies.

But the debates have taken on a strange new life on social media — including the fact that you could watch them on Facebook, Twitter and YouTube. And within hours of the last platitude, your Facebook page and Twitter feed was invariably full of “takes” on what went down, with clips of purported “gotcha” moments. Since that page and feed are curated by an algorithm tailored to serve your tastes, it’s unlikely anybody’s preconceptions will be challenged in the medium where they get their news.

Which means that, in 2019, everybody has the debate they want, with the candidates they want to win winning.

Debate Night: Mudslingers and Zingers But No Knockout Blow

POLL: Which of the front-runners delivered the best performance in Monday night’s leaders debate?