A Week of Nobel Firsts: 97-year-old Winner in Chemistry and 16-year-old Greta Thunberg Shut Out 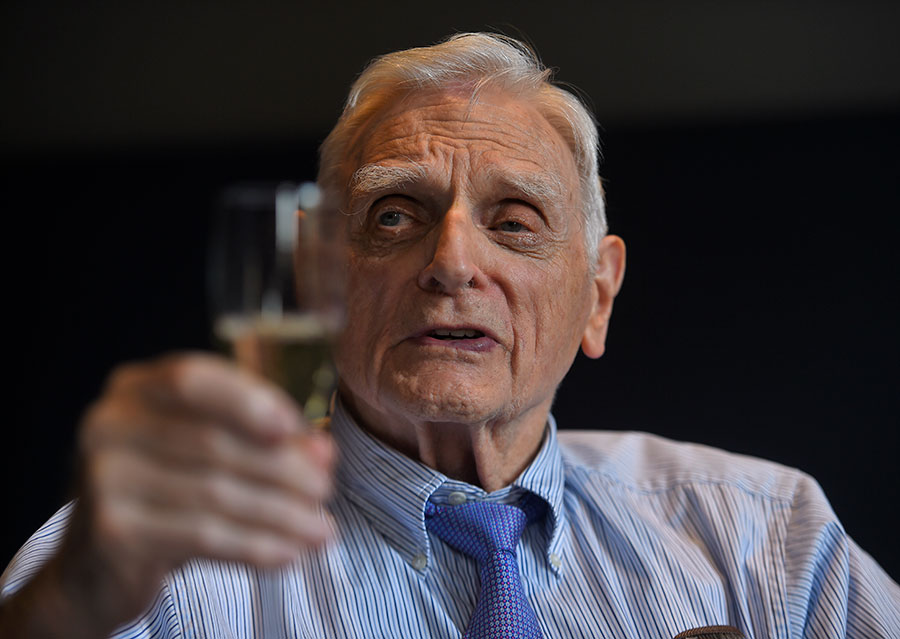 Nobel week was full of firsts, including the announcement of the oldest laureate in history after 97-year-old John B. Goodenough was one of three scientists who won the chemistry prize for decades of work developing the lithium-ion battery.

“Live to 97 and you can do anything,” Goodenough said in a statement from the University of Texas at Austin where he is a professor in the Cockrell School of Engineering. “I’m honoured and humbled to win the Nobel Prize. I thank all my friends for the support and assistance throughout my life.”

Goodenough, who won the prize alongside Stanley Whittingham and Akira Yoshino, was recognized for the work he did at Oxford University in 1980 when he identified the cathode material necessary to develop the rechargeable lithium-ion battery. It paved the way for the tech revolution by powering portable electronics like the mobile phone and laptop computers.

“At 97 years old, Goodenough continues to push the boundaries of materials science with the goal of inventing more sustainable and energy-efficient battery materials,” UT Austin said in a press release. “Goodenough and his team recently identified a new safe cathode material for use in sodium-ion batteries. ”

Speculation was rampant that the much-vaunted Nobel Peace Prize could go to 16-year-old Swedish climate activist Great Thunberg, which would have made her the youngest Nobel laureate in the world. The record is currently held by Pakistani activist Malala Yousifzai, who won the Nobel Peace Prize in 2014 at 17 for her work on girls’ rights to education.

But Thunberg, who started a global youth movement to protest the lack of commitment to reversing climate change, was shut out, and the prize went to Ethiopian Prime Minister Abiy Ahmed for his work ending the long and bitter conflict with neighbouring Eritrea that raged at its northern border for 20 years after the civil war ended in 2000.

“I am so humbled and thrilled … ,” Abiy said Friday.  “It is a prize given to Africa, given to Ethiopia, and I can imagine how the rest of Africa’s leaders will take it positively to work on peace building process in our continent.”

“This is my message to Ethiopians: love looks better on you,” Abiy said after signing the declaration in Jeddah, Saudi Arabia, adding, “Love is the only way with our Eritrean brothers.”

Although Thunberg was the odds-on favourite to win the peace prize, analyst Henrik Urdal, the head of the Peace Research Institute of Oslo, told the Washington Post that she didn’t make his short list because there “isn’t scientific consensus that there is a linear relationship between climate change — or resource scarcity, more broadly — and armed conflict.”

Among the peace prize nominees was 29-year-old Ilwad Elman, a Somali-Canadian social activist who moved to Ottawa in 1999 following the assassination of her father, Elman Ali Ahmed, a leading Somali peace activist. She has won countless awards for work with various organizations and groups, including as the director of programs and development at Mogadishu’s Elman Peace and Human Rights Center, founded by her mother.

The nomination came at a time when Canada is in the throes of an election campaign where rhetoric around refugees and immigration has been a flashpoint.

Canadians have been awarded the Nobel Peace Prize twice in the award’s 100-year history. Future Prime Minister Lester Pearson won in 1957 for his efforts, working with the United Nations, to help solve the Suez Crisis. And in 1995, the combined work of the Pugwash Conferences on Science and World Affairs — founded in Pugwash, N.S. — received the honour for helping deescalate armed conflict on a global scale.

In another first, Polish activist and author Olga Tokarczuk, 57, won both the 2018 Nobel Prize for literature and the Man Booker International Prize the same year for her novel Flights. She is the also first Polish writer to take home the award.

Canadian authors Margaret Atwood and Anne Carson were considered favourites to win the award. Alice Munro was the first Canadian woman to win the Nobel Prize for literature in 2013.

The 2018 Nobel for literature was announced this year alongside the 2019 winner, Austrian novelist and playwright Peter Handke, 76,  following a series of scandals involving sexual abuse and suggestions of improper financial contributions that rocked the awarding body, the Swedish Academy, last year. The Nobel Foundation released a statement reinforcing its faith in the personnel and policy changes made in the wake of the scandal,

The Nobel committee cited her “for a narrative imagination that with encyclopedic passion represents the crossing of boundaries as a form of life.”

Aside from her writing, Tokarczuk is also celebrated for her peace work in Europe, winning the 2015 Brückepreis lifetime achievement award for efforts that include the “creation of literary bridges connecting people, generations and cultures, especially residents of the border territories of Poland, Germany and the Czech Republic, who have had often different existential and historical experiences.”

The announcement of Handke as the 2019 recipient of the literature prize brought more criticism.

Handke, whose novel Repetition and play Walk About the Villages are among his best-known works, called for the abolishment of the Nobel Prize for literature in 2014 and proved an outspoken supporter of Serbian authoritarian leader Slobodan Milosevic, at whose funeral he spoke. According to the U.K.’s Guardian, “Handke’s pro-Milosevic stance has seen him condemning ‘criminal’ NATO intervention in Serbia, and claiming that the Muslims had staged their own massacres in Sarajevo and had blamed this on the Serbs.”

Political and literary figures spoke out against Handke’s win on Thursday, though the Nobel committee said he deserved the honour “for an influential work that with linguistic ingenuity has explored the periphery and the specificity of human experience.”

The other notable  Nobel Prize winner was St. Boniface, Man., native James Peebles, 84, who shared the prize for physics with two others for what the Nobel committee called “contributions to our understanding of the evolution of the universe and Earth’s place in the cosmos.”

One-on-One with Kazuo Ishiguro, Winner of the 2017 Nobel Prize in Literature