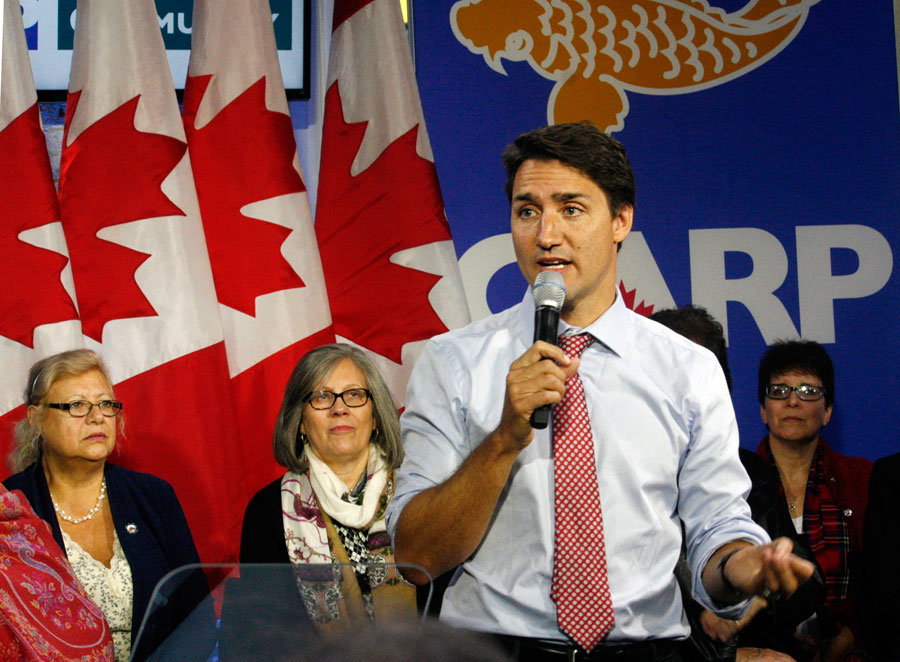 Liberal leader Justin Trudeau made a campaign stop at CARP in 2015 where he unveiled a package of senior-friendly promises. In 2019, however, the Liberals declined an invitation to visit CARP.

Ignored and disrespected — that’s how many Canadian seniors are feeling about treatment they’re getting from the two main parties during this federal election.

Whether it’s promises that amount to very little or outrage over the condescending and outdated attitudes political figures display, they’re feeling increasingly invisible in this election.

“I am so disappointed in the choices  in this election,” says Sylvia George, 66, from western Canada (who asked that her name be changed). “No party is offering someone like me anything – it’s like we don’t exist.”

The recent English-language leaders debate bears out George’s complaint. In the days following the debate, CARP — an advocacy group that promotes a New Vision of Aging — ran a poll asking its members which candidate best addressed seniors issues. Of the more than 2,000 members who responded, an overwhelming number were underwhelmed: 40 per cent chose “None of the leaders.” To put this in context, Liberal leader Justin Trudeau scored only 14 per cent and Conservative leader Andrew Scheer came third with 12 per cent.

If you slog through the transcript of Monday’s English-language debate with  all six federal leaders, you’ll find out why many older voters complain of being shut out. The word “seniors” was mentioned a grand total of four times — a handful of throwaway asides during a two-hour affair. On the other hand, issues like Quebec (100 mentions), climate change/environment (89 mentions), improving life for Indigenous/First Nations (66 mentions), helping families (26 mentions) and Bill 21 (14 mentions) dominated the night. While these are all important matters, surely seniors issues merited more than four measly mentions.

But in an election that’s become largely centred on the credibility (or lack thereof) of the two front-running candidates, seniors issues have taken a back seat, brushed off to the side, if not completely ignored.

It’s a massive oversight that David Cravit, chief marketing officer of CARP, finds both perplexing and surprising. “It betrays a complete lack of understanding that seniors control the ballot box,” says Cravit, pointing out that the oldest demographic (65-plus) usually outvote the younger demographic by a factor of three to one at election time.

Related: Demographic Destiny: Moses Znaimer Explains Why Older Voters Will (Yet Again) Control the Ballot Box in This Year’s Election

Compare the resounding silence on seniors issues this year to the noisy role they played in the 2015 election. That year, Trudeau busted up the long-time stronghold the Conservatives had with 65-plus voters by offering a basket of goodies for the entire cohort: expanding CPP, lowering the age to receive OAS to 65, increasing GIS by 10 per cent and investing in home care. This year, he’s offering two promises for small segments of the demographic. Perhaps even more telling was the fact that Trudeau held a townhall at CARP during the 2015 election. This year, he decided against a repeat visit.

Where are the seniors issues?

While both the Trudeau and Scheer have brought up several relevant promises during this campaign, they’re not exactly generating a tidal-wave of support among savvy mature voters. The Liberals say they will raise OAS by 10 per cent (for those over the age of 75) and increase the CPP survivor benefit by 25 per cent. The Conservatives, meanwhile, are hyping a 1.5 per cent tax cut for those making less than $47,000 a year and a plan to increase the Age Credit to $1,000.

Everything helps, says Cravit, but in reality it’s nowhere near enough. “The two leading parties aren’t reaching out to seniors because they take their vote for granted,” he says. “They haven’t taken the time or effort to truly understand that there’s a revolution in aging going on in Canada.”

Because seniors are living longer healthier lives and remaining in the workforce in record numbers, they have different needs than they once did. “But the Liberals and Conservatives are still operating on the assumption that the only things seniors care about are pensions and retiring quietly with dignity,” he says.

“I am so sick of the parties stereotyping seniors as poverty-stricken, sickly, unproductive members of society,” agrees George. “It seems like they only want to help seniors who have to live on CPP and OAS — no one talks about middle-income seniors who fought like hell to save for their old age.”

George, who says she can just afford to pay the bills says she’s particularly miffed about mandatory RRIF withdrawals at age 71, lack of incentives for companies to hire seniors and a shortage of retraining programs and the lack of tax breaks for those who want to make their homes more accessible.

So why are the parties ignoring George and others like her? Cravit suggests the Liberals and Conservatives feel they can “sprinkle a few crumbs to seniors” and win their vote. But this doesn’t answer the needs of such a large and diverse demographic. Where, asks Cravit, is the national seniors strategy or dementia strategy? Where’s the grand plan to prepare our health system for an aging population? Who’s offering to improve access to primary care physicians and treat mental health? Is any party promoting health and wellness among seniors (like CARP’s “Stand Up Straight” campaign)? Who’s mentioning the high cost of living for seniors, tax relief for caregivers, pension protection or changing the rules on mandatory RRIF withdrawals?

You won’t hear much on these seniors issues unless it’s from the Green Party or NDP. While both these parties offer robust seniors’ platforms, they’re also trailing badly in the polls, and neither has a realistic chance of forming the next government.

That leaves many older voters facing a conundrum:  either they spend their voting capital on a third-place party or they place their support with one of the favourites and hope for the best.

On election day, George says, “I will hold my nose and vote for the party that annoys me the least.”

Not exactly a ringing endorsement for any party. But unless the candidates suddenly change tack in the remaining days before the vote, it’s a strategy that many other seniors may be following.

Our readers speak out

Without much on offer from the parties, our Facebook followers sounded off on whether they feel the parties are ignoring older voters in this election and, if so, what are the key issues they aren’t addressing. Here is a sampling of the results.

Elaine Lee: We are really being so badly ignored. [The government] is just waiting for us all to die.

Linda Broesky: You’ve heard of the minority groups …. well, seniors are a step below that in the unspoken “invisible group.” No one gives a sh** about seniors.

Christel Schindler: Of course they’re being ignored. Not one party seems to want to increase the OAS or the GIS, yet that is what seniors need to get out of poverty and have a decent standard of living.

Wendy Blake: We are sooo ignored, but what we don’t realize is the power we have … baby boomers! We’re still here.

Brenda Wade Young: We are so ignored … everything goes up yearly but old age pension.

Lynda Gulley: People over 70 should not have to pay any taxes unless they have an income of over $100,000. That would allow them to travel and spread that money around in the economy.

Chris Van Duelmen: With aging comes health issues, both physical and mental. This is a MAJOR issue not being addressed by ANY party.

John Tomkinson: Everyone talks about “middle income” but many seniors are below that category. Plus, they are dealing with health issues that [the Canadian health system] fails to address.

Sue Robbins: Raise the old age pension to reflect the cost of living. Seniors have a lot of medical expenses that go uncovered, so we have to chose between being able to eat or buy our much needed medication.

Mitos Santos: [I suggest a] tax credit for fees paid on joining fitness programs to alleviate their aches and pains brought by old age.

Jocelyn Kelland: I’ve felt there is a complete disconnect between the party leaders and the needs of seniors. Trudeau has given millions to young families and nothing for anyone else. I believe the only thing he offered was an increase in OAS after the age of 75. What one does in the decade after 65 is anyone’s guess. I’m 67 and I figure I’ll have to work ’til I die — what fun.