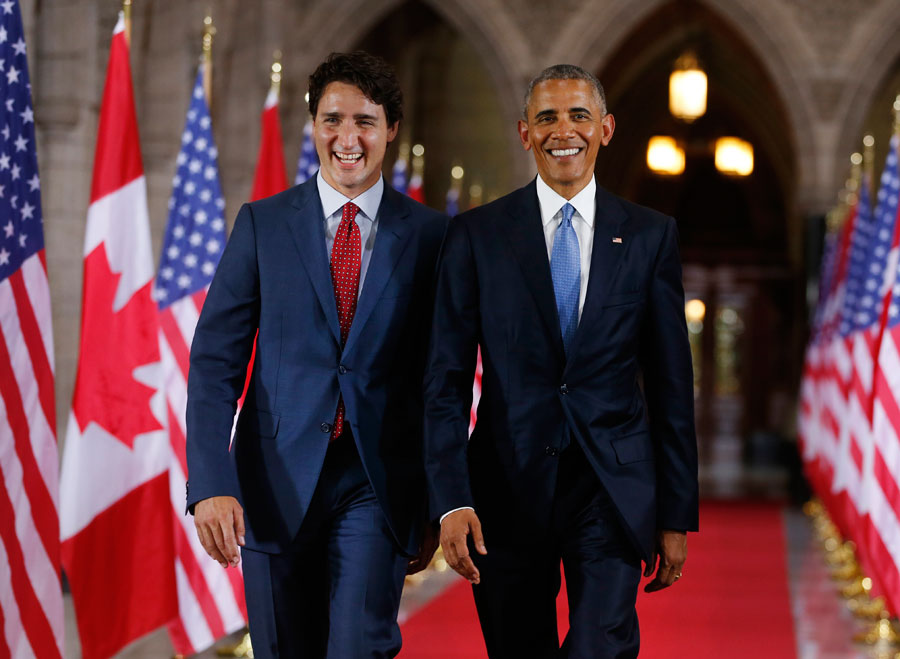 On a day when U.S. President Donald Trump tried to drag Barack Obama into America’s impeachment politics by accusing him of involvement in a unproven conspiracy theory related to the 2016 election, Obama’s attention was fixed due north on the Canadian federal election. This afternoon, the former U.S. president tweeted out an endorsement of Prime Minister Justin Trudeau to his 109.4 million followers, which could give the Liberal leader a much-needed boost  just days before Canadians head to the polls.

The Obama tweet set off a firestorm on Twitter, with political pundits and everyday Canadians weighing in. CTV commentator Don  Martin tweeted that is was a “highly unusual move by a former U.S. president to endorse anyone in a Canadian election. Can’t recall a precedent for this.” Many questioned whether it was an example of outside influence on the Canadian election, but Elections Canada ruled the endorsement did not constitute foreign interference.

“All individuals, Canadian or non-Canadian, are free to express their views on any topic during an election. A foreign citizen tweeting, or speaking at an event organized in Canada, does not by itself constitute an instance of undue foreign influence under the Canada Elections Act,” spokesperson Natasha Gauthier said in an email to the Globe and Mail. “Whether expenses were incurred, who incurred them and for what reason would be among the factors that need to be considered before determining if undue foreign influence has taken place.”

When asked about the Obama post, Green Party Leader Elizabeth May said she was “surprised that any former U.S. president would endorse or engage in Canadian politics. Clearly we remember the ‘bromance’ … but I think it’s important for Canadians to decide who forms government.” Perhaps because Conservative Party leader Andrew Scheer was recently embroiled in a controversy over his undisclosed dual American citizenship,  he was more circumspect in his response. “I’ve got millions of Canadians like the ones here tonight behind me,” Scheer said at a campaign stop in Ancaster, Ont. “I’m not focused on what former foreign leaders are saying, I’m just focused on finishing this election strong and putting forward my plan to help Canadians get ahead.”

Scheer wouldn’t say whether he thought it was appropriate for Obama to endorse Trudeau, adding, “I’ll let Canadians be the judge of that.”

Obama’s 2008 election as America’s first Black president stirred up a virulent racist backlash in the United States. During his term, there was a rise in hate crimes from white nationalist groups, and he and his family were derided with racist stereotypes and tropes, including the since-debunked birther conspiracy theory popularized by Donald Trump that Obama had been born in Kenya and was not American.

Obama’s endorsement would not be a  surprise under normal circumstances, given that he has endorsed like-minded international politicians like Emmanuel Macron of France in the past. But, unusually for Canada, this  campaign season has been rife with accusations of racism.

First it was NDP leader Jagmeet Singh, the first non-white leader of a national political party, who was targeted for wearing religious symbols — a turban and kirpan.  Then accusations of racism and xenophobia were lobbed at the  Conservatives and the People’s Party of Canada. Then, most shockingly,  the Prime Minister’s campaign was rocked after decades-old images surfaced of Trudeau wearing brown and blackface. Citing “layers of privilege,” Trudeau apologized for his transgressions, but was unable to say how many times he had engaged in the disgraced practice.

Obama said in his tweet he was proud to work with Trudeau.  “He’s a hard-working, effective leader who takes on big issues like climate change. The world needs his progressive leadership now, and I hope our neighbours to the north support him for another term.”

As a politician, Obama has always shown a pragmatic streak, and here he has made the calculation that Trudeau’s policies, especially globally, trump pictures. Plus he seems to really like the guy, and their many chummy photo ops gave rise to a bromance meme.

When Trudeau came to power in 2015, it was the waning days of the Obama administration, and lame-duck Obama seemed to hitch his wagon to Trudeau’s rising star. First, the Obamas welcomed Trudeau to the world stage with a glittering state visit in 2016, and Trudeau returned the favour by inviting Obama to speak to Parliament, where the U.S. President uttered the famous line: “The world needs more Canada.” Since Obama left office, the two leaders have continued to revel in their telegenic wokeness, with at least two Montreal “beer summits” captured on social media.

In his memoir The World As It Is, deputy National Security Advisor Ben Rhodes — a confidante of Obama — recounts a conversation Obama  and Trudeau had at an Asia-Pacific Economic Co-operation meeting in Lima in 2016, after Trump had beaten Hillary Clinton to become the 45th president.

“Obama — not usually an outwardly sentimental man — attempted to pass a torch of sorts.” Rhodes wrote. “’Justin, your voice is going to be needed more,’” he said, leaning forward and putting his elbows on his knees. ‘You’re going to have to speak out when certain values are threatened.’”

While Obama was clearly concerned with the global rise of right-wing nationalist governments, he has long shown tolerance for the complications and nuances of a racialized history and society. In March 2008, after controversial statements about white America made by Obama’s Chicago pastor Reverend Jerimiah Wright were unearthed, it threatened to derail the presidential campaign. Then a senator, Obama gave a seminal speech on race in March 2008, “A More Perfect Union.” In it, he admitted that his Caucasian grandmother — who loved him and raised him — was scared of young, black men who looked like him that she encountered on the street. Obama also overlooked racially tone-deaf statements from then Senator Joe Biden, who described Obama as “clean and articulate,” and chose him as his vice-presidential running mate anyway. Biden is now running for that office largely on Obama’s legacy and, although he continues to put his foot in his mouth on race issues, is polling way ahead with the African American vote.