Campaign 2019: When the Choice is Two Unpopular Leaders, Will Voters Stay Home on Oct. 21? 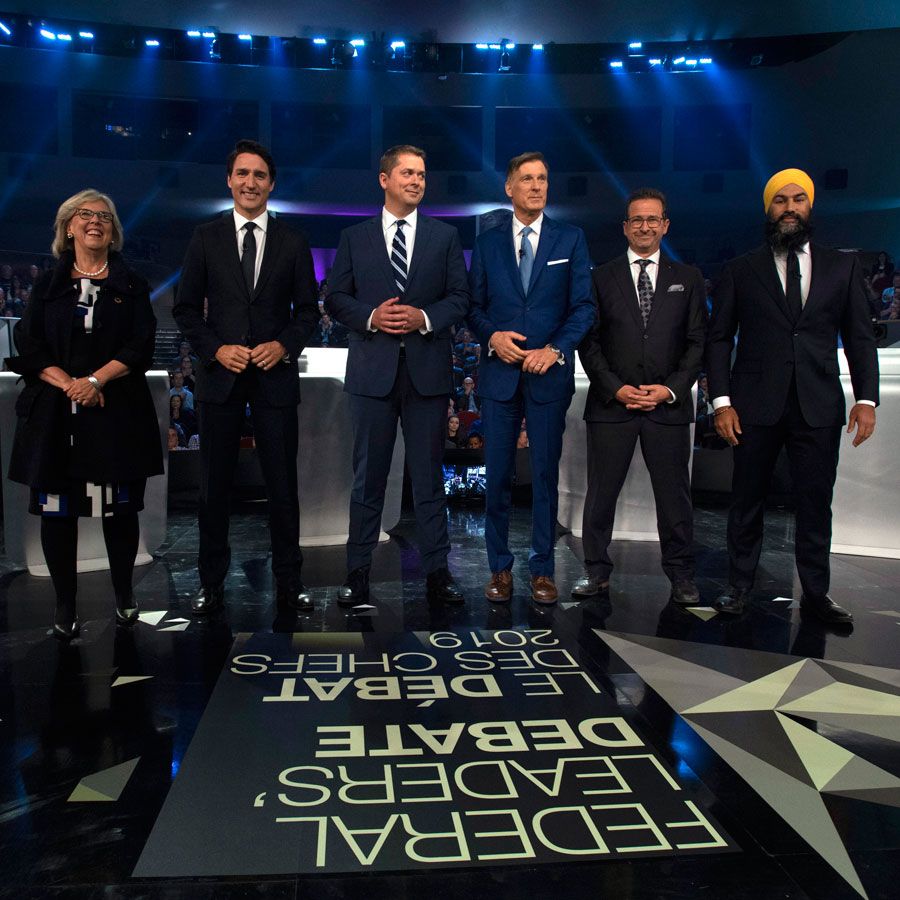 At Thanksgiving dinner this weekend, I expected talk of this year’s federal election would dominate the conversation. Considering there’s only a week to go in the campaign and the margin at the top is razor thin, surely it would be at the tip of everyone’s tongue.

But in an election that’s become a desultory slugfest between two unpopular leaders offering irrelevant promises, the subject didn’t come up and we enjoyed a blessedly apolitical feast.

My guess is this year’s election generated the same lack of buzz at many tables across Canada. When I monitor readers Facebook comments about our election coverage or listen to callers during my weekly appearances on Fight Back With Libby Znaimer (on Zoomer Radio), I keep running into similar expressions of indifference: “I suppose I really should vote but …”

While my own scope may be limited, the media has picked up on this apathy, at least judging by their headlines:

And my personal favourite:

Usually a clear choice has emerged by the last week of most election campaigns. The party that offers the most compelling promises or the one with the most popular leader begins building momentum and starts to distance itself from the rest of the pack.

But we’re all still looking for a compelling reason why we should venture out to the ballot box on Oct. 21. Instead, it’s become a slow march to the finish line between two leading parties that have failed to pique voters’ curiosity.

A face-off between two unpopular leaders

When there’s a dearth of intriguing hot-button issues, elections usually boil down to the leaders’ popularity. This year, however, it’s more like an unpopularity contest. While voters seem fed up with Justin Trudeau’s personal peccadillos and his penchant for running up the national credit card, they’re not exactly enamoured by the uncharismatic and uninspiring offerings of Conservative leader Andrew Scheer. And even though they respect the NDP’s Jagmeet Singh and the Green Party’s Elizabeth May, they’re not enthralled by the idea of voting for a party that doesn’t have a hope of forming the next government.

It’s a bizarre development that has left even veteran pollsters struggling to come up with answers. “Usually at this stage of the game, someone takes over, and momentum starts to build behind a particular choice,” says Darrell Bricker, CEO, Global Public Affairs at the polling firm Ipsos. “But right now, we’re not seeing a public consensus being built.”

Bricker points out that in every campaign since 2000, the candidate who eventually won the election scored a popularity rating at or above 60 per cent. In the 2015 election, for example, Trudeau’s popularity went through the roof — 69 per cent — clearing the path to a Liberal majority government.

That’s just not happening in 2019. Hammered by the SNC-Lavalin ethics scandal,  brown- and blackface images, a poor environmental record and massive deficits, Trudeau’s popularity ratings have cratered. Most polls show his favourability ratings have been slashed in half, now lingering in the mid-30s — not where you want your leader to be at re-election time.

“Trudeau was such an inspirational force in the last election and really drove a lot of people who don’t normally vote in elections to support him,” says Bricker. “This was especially true of progressive voters, who are really motivated by inspirational leaders.”

But that was back when the Liberal leader was a global media superstar whose “Sunny Ways” vision had many feeling good about supporting him at the ballot box. “Over the space of the last four years, he’s managed to disappoint those people who had so much hope in him,” says Bricker.

Curiously, while this pervading sense of disappointment has hurt Trudeau, it hasn’t really helped Scheer. According to Ipsos/Global News polls, only 30 per cent of Canadians think that the Conservative leader “would make the best prime minister,” trailing Trudeau by five per cent. It seems that the same voters who are turning on Trudeau “aren’t finding a lot of inspiration with Scheer,” says Bricker.

So, in an election where neither Trudeau nor Scheer have managed to inspire any love, it would stand to reason that the NDP’s Singh or the Green Party’s May, both of whom have impressed voters with positive approval ratings, would receive a boost.

But that formula isn’t holding true, says Bricker. While he suggests that voters find Singh and May to be less “alienating” politicians than Trudeau or Scheer, they don’t think either is prime minister material. “The public is wise enough to know that the Green Party or the NDP are not going to be the next government,” says Bricker. Hence, they’re not rising in the polls.

This helps explain the relatively high number of undeclared voters, who by this point in the election have usually declared themselves one way or the other. Again, not so. In last week’s Zoomer Primary pre-election poll, the “undecided” voters comprised 12 per cent.

Will undecided voters sit it out?

The great question has become whether the undecideds will even bother going to the polls. Many Canadians (especially older voters, who always turn out in droves) cherish their democratic privilege and will go out and vote regardless of the paucity of choice.

This year, however, it would be understandable if they decided to skip the process altogether. It’s altogether unlikely we’ll see the same participation rate this year as we did in the last election, when 68.5 per cent of of Canadians went to the ballot box, the highest turnout since 1993.

Writing in Maclean’s, Scott Gilmore perfectly captures the existential crisis that’s infecting many voters during this year’s campaign. “It’s like watching bad actors in an off-off-Broadway play with no plot, no meaning and no intermission.”

Ladies and Gentlemen, I give you Election 2019!