Day 3: Royal Focus Is on Climate Change as William and Kate Walk in Diana’s Footsteps in Pakistan 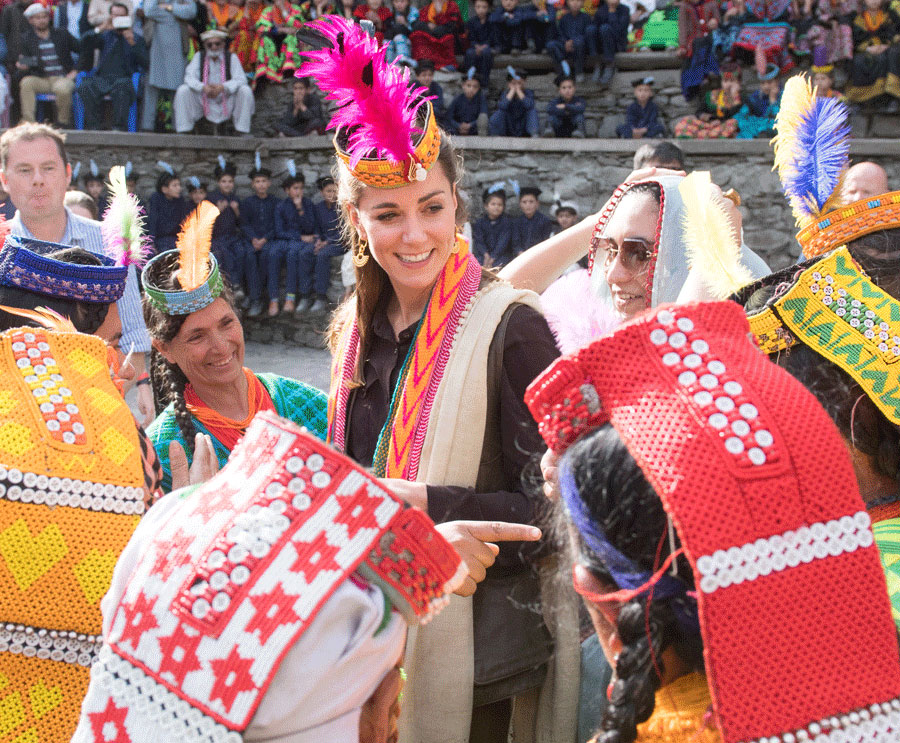 Prince William, Duke of Cambridge and Catherine, Duchess of Cambridge visit a settlement of the Kalash people in Chitral, Pakistan to learn more about their culture and unique heritage. Photo: Samir Hussein - Pool/Getty Images

The Duke and Duchess of Cambridge set off on the third day of their five-day tour of Pakistan for the Hindu Kush mountains in the north, not far from the Afghan border, to see firsthand the effects of climate change. There they found melting glaciers and communities coping with the devastating effects of global warming.

Following in the footsteps of his late mother Diana, who visited the same region on a solo visit in 1991, Prince William and Kate took a helicopter to the Chiatibo glacier, which loses about 10 metres of ice a year due to rising temperatures. This causes flooding of communities below and constitutes a threat to the water supply of more than 200 million people.

But all was not doom and gloom. There were also some great hats for playful and nostalgic photo ops. Upon arrival at the Chitral air base, the couple was presented with traditional regional outfits — including the same white Chitrali beret-style hats that Diana had worn in 1991. William and Kate were amused by this sartorial serendipity as they leafed through a commemorative photo book of Diana’s tour presented by local officials.

William emphasized the important place Pakistan holds for his family and for Britain, which is home to some 1.5 million people of Pakistani descent. The Duke used his speech the night before, at a formal reception at the Pakistan Monument in Islamabad, to illustrate “the great strides” the country has made since independence 72 years ago. “The view from this hill would have been quite different when my grandmother, the Queen, first visited a half century ago,” Prince William said. “Looking out, one would have seen the beginnings of a city under construction, yet to become the great capital it is today.”

He cited more family ties to the country, including that of his father, the Prince of Wales, who made the last official royal visit in 2006 with his second wife, Camilla, Duchess of Cornwall. Diana made a solo visit to the country in 1991, followed by two humanitarian missions in 1996 and 1997.

But the main thrust of the speech, which he gave wearing a remarkable piece of “diplomatic fashion,” a teal sherwani suit, was about climate change. “Whether in Pakistan or the U.K. or elsewhere on our planet, we face shared global challenges.” Alluding to today’s tour destination, he said, “In Pakistan, your spectacular glaciers — and those of the wider Hindu Kush-Himalaya region — serve as a critical water store for a quarter of a billion people, and over 1.65 billion people rely on the great rivers that flow from the mountains in this part of the world.”

There were yet more hats — these ones festooned with bright feathers — awaiting the royals as they went to visit villages affected by glacial melt, including Bumburet, which was destroyed by flood waters in 2015. There they observed an emergency response drill, where community members practised rescue methods to pull each other from flooded rivers.

William, who studied geography at St. Andrews University in Glasgow — where he met his future wife Kate, an art history major — was clearly in his element. He joked that his professor would be glad to see him back in the field. And Kate, playing the supportive but lighthearted partner, piped up that she is “very impressed by William’s geography.”

As they met with village residents and watched a traditional dance, William added that places “vulnerable to change needed more education, more awareness and political action.” And he echoed Prince Harry’s words on his recent tour of Southern Africa, saying “The young are starting to get engaged in it,” referring to recent climate strikes designed to prompt action on global warming. William, second in line to the throne, has to be less political than his brother, who has moved down to sixth in the line of succession behind William’s three children. Harry is thus allowed to directly reference climate protesters such as Swedish student activist Greta Thunberg, while William has to make more subtle allusions to avoid the appearance of meddling in politics.

After his boffo appearance in bold teal the night before, the Duke went for a simple light teal shirt and khakis for the rough terrain today. Kate sensibly wore flat chocolate suede boots by a brand called Really Wild and a leather vest, one she had worn previously, by the same label. Leather, especially leather vests, are very on-trend this season, as was the tan midi-skirt that she chose to complete her look. The simple, neutral-toned outfits were practical but also strategic, as the pair went on to layer accessories over them — scarves and hats and embroidered coats — that they were presented with along the way.