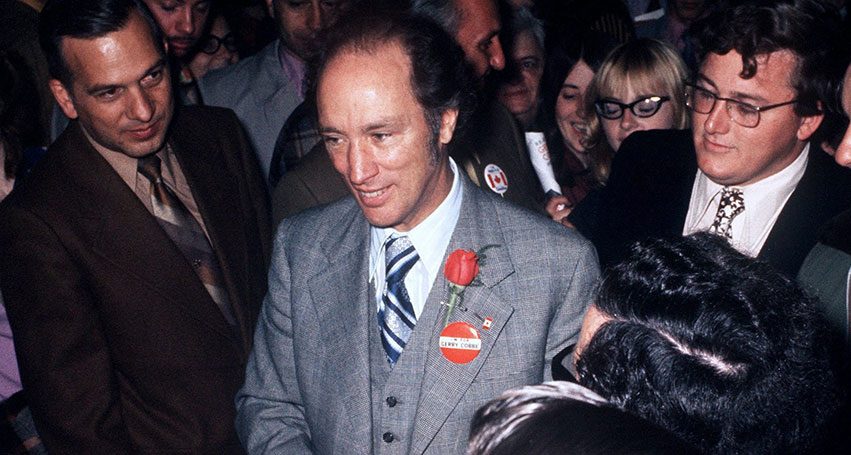 “He’s not his father,” has been the dismissal often levelled at Prime Minister Justin Trudeau – ironically often by people who couldn’t stand his father.

But as we head to Chapter 2 of PM Trudeau: The Next Generation, there are certainly parallels. Like Pierre, Justin followed a first term – one that began with its own version of Trudeaumania – with a spanking from an electorate that was angry and disappointed but just not ready to quit him.

The result in both cases was a minority government that needed to be propped up by a third party.

But where Justin Trudeau’s minority is but a baker’s dozen short of a majority, Trudeau senior’s close call on Oct. 30, 1972 was razor thin. In a very different Canada with no social media, no national debates on the two existing TV networks and four parties, the Liberals won with 109 seats to 107 for the luckless Robert Stanfield’s Progressive Conservatives.

Indeed, many people went to bed on election night thinking the Tories had won. Final ballot counts overnight swung the seat tally just enough for Pierre Trudeau’s party to retain power (with the co-operation of David Lewis’s NDP, who’d snagged a then-record 31 seats of their own).

With the result in doubt, I remember the insouciant Trudeau shrugging on the late TV news and quoting the poem The Desiderata, “No doubt the universe is unfolding as it should.”

Also, eerily reminiscent is the fact that the 1972 election result reflected a seriously divided Canada.

Sound familiar? After their respective elections, 47 years apart, both Trudeaus could look at an electoral map and see an essentially Liberal-free zone that starts at the Ontario/Manitoba border and ends at B.C./Alberta. It is the father’s legacy, inherited by the son.

It could be argued that electoral wounds suffered by both father and son were self-inflicted. In 1972, Pierre Trudeau campaigned, almost reluctantly, under a meaningless slogan – “The land is strong” – that almost seemed designed to enrage people who begged to differ, as the economy began dipping into what would be the infamous ’70s “stagflation.”

By contrast, the NDP’s eventual arbiter of power, David Lewis, campaigned furiously with three words – “Corporate welfare bums” – hammering the message that the tax system and the two major parties themselves, abetted a hegemony of the rich. Thank God that changed (he wrote, sarcastically).

For his part, Justin Trudeau ran an election of apologies, rationalizations and occasional doubling-down on gaffes and outright misdeeds. In the SNC-Lavalin Affair, his hardball treatment and expulsion of two women caucus members, one of them Indigenous, tarnished his Sunny Ways image. His brownface/blackface revelations made it all the way to the monologues of U.S. late-night talk shows. Public ridicule used to be the kiss of death for a politician, but it seems to be a genetic Trudeau trait to find a way to win.

In another parallel, both Trudeaus could and can ultimately thank one eastern province for their win, in each case by playing to fears. In 1972, Trudeau’s Liberals failed to win ANY province, save for Quebec, which delivered a whopping 56 seats. PET was the guy who cracked down on the FLQ by invoking the War Measures Act during the October Crisis.

To many civil libertarians, this was appalling, but it meant Pierre Trudeau’s Liberals could count on virtually all the province’s federalist votes. For conservatives, it was the beginning of what the late Toronto Sun pundit Bob MacDonald repeatedly called, “the Quebec tail wagging the Canadian dog.”

Of course, we live in an entirely different Canada, where the Liberals still get Quebec federalist votes, but the Bloc Quebecois lived up to its name by blocking Liberal majority hopes (imagine explaining to someone in 1972 that there would one day be a federal party that exists for the sole goal of Quebec separation and that that party could conceivably hold the balance of power in a federal minority government).

With Quebec no longer a guaranteed Liberal stronghold, Justin’s win came courtesy of Ontario, whose impulsive Conservative premier’s program of cuts has clearly made him unpopular. The federal Conservatives all but sent Doug Ford to a monastery for the duration of the campaign, but Trudeau-the-younger invoked his name as if he were conjuring a demon.

The result was 77 seats in riding-rich Ontario.

In 2019, there are countless more TV channels, myriad social media networks and streams of politics that make voting almost a boutique experience. As a result, Justin Trudeau won his minority with less of the popular vote than the Conservatives’ Andrew Scheer. (By comparison, his father’s whisker-thin win came with a 3.4 per cent plurality of the popular vote.)

The gulf between the two Trudeaus is so vast, the worlds of 1972 and 2019 so utterly different, that you soon run out of points of comparison. But if the next Trudeau scandal somehow involves the Rolling Stones, we’ll know there’s a cosmic connection.