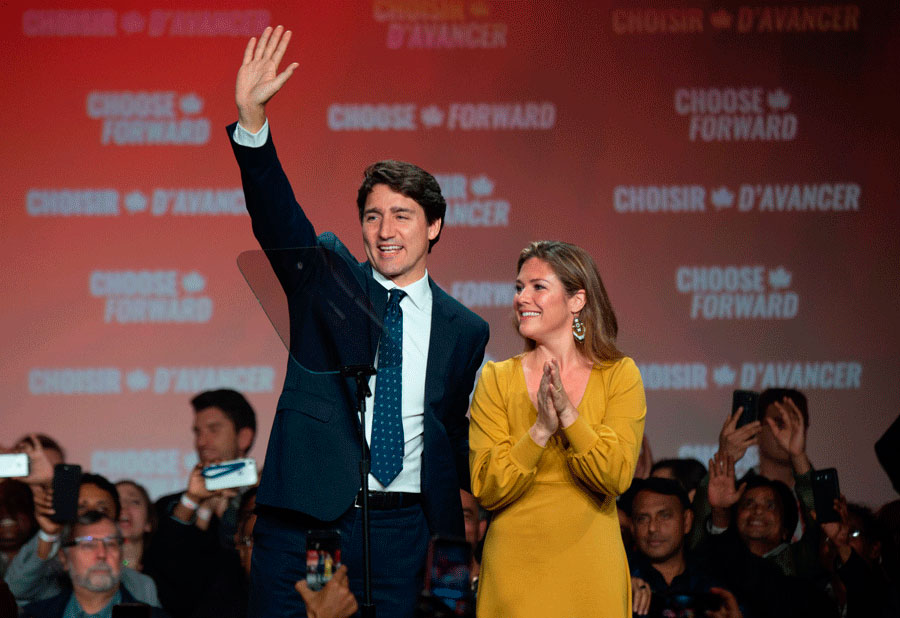 In an election that came down to the wire, voters handed Justin Trudeau and his Liberal Party a minority government with a stern rebuke — we’ll give you another chance in power but we’re putting you on a shorter leash.

Although the Liberals won 34 ridings more than the Conservatives, losing the popular vote doesn’t give them an overwhelming mandate to govern. Though they won 157 seats to the Conservatives’ 121, their share of the vote was nearly identical at 33.3 per cent compared with 34.5 per cent for the Conservatives.

In our first-past-the-post electoral system, which the Liberals pledged to change but reneged on after they said they couldn’t find consensus on the issue, whoever gets the most votes wins the riding and a seat in Parliament. But if you add up the actual number of votes cast for each party across the country, the Conservatives came out on top.

Invoking some of the magic that saw him win a landslide majority in 2015, Trudeau miraculously survived two big scandals — SNC Lavalin and the publication of brown- and blackface images from his past — and withering attacks from all sides to stitch together a minority government.

After 40 days and 40 nights, the Conservatives failed to part the red sea in Ontario, and the Liberals rode the wave all the way to downtown Toronto, where urbanites voted overwhelmingly for the governing party. Surrounding the island of red, it was Conservative blue, which means that the Liberals actually lost the popular vote to the Tories.

In what could be seen as an alpha move, Trudeau steamrolled over Scheer’s election speech, starting his remarks just as the Conservative leader was warming up at the podium in Regina, and as NDP Leader Jagmeet Singh was still going on in Burnaby. At one point CBC had all three leaders on a split screen, but quickly made the decision to cut away from Scheer’s speech and go to Trudeau, who opened with a jab at his opponent.

“Tonight Canadians rejected division and negativity … and they voted in favour of a progressive agenda and strong action on climate change.” Though he later acknowledged that voters in Quebec, Alberta and Saskatchewan did not support him, he did say he had a clear mandate.

“To those who did not vote for us, know that we will work every single day for you. We will govern for everyone. Regardless of how you cast your ballot ours is a team who will fight for all Canadians.

“Dear Quebecers, I heard your message tonight. You want to continue to go forward with us, but you also want to ensure the voice of Quebec will be heard even more in Ottawa and I can assure you my team and I will be there for you.

“For Canadians in Alberta and  Saskatchewan …. know you are an essential part of our great country. I’ve heard your frustration . Let us all work hard to bring our country together.”

When the networks finally aired Scheer’s speech, he struck a bullish tone. “Tonight, Conservatives put Justin Trudeau on notice. Mr. Trudeau, when your government falls, Conservatives will be ready and we will win.”

As expected, he pointed to the fact that despite losing to the Liberals by 34 seats, the Conservatives won the popular vote. “More Canadians wanted us to win this election than any other party.”

Despite winning the popular vote, he expressed disappointment in the results but maintained that he was “proud of sending a bigger, strong Conservative team to Ottawa.”

He also sent a signal that he may be willing to work with the Bloc Quebecois when he said, “Quebec values are Conservative values,” an attempt to head off a possible coalition of progressives.

In the end, an election short on issues became a referendum on leadership. While there wasn’t the the same outpouring of Trudeaumania that swept him to power in 2015, voters clearly weren’t clamouring for Andrew Scheer as Prime Minister.

Results in the Maritimes told the early tale. The Liberals swept all 32 seats in Atlantic Canada in 2015, but lost seven seats this time around, an early indication that a majority government might be in the cards. However, the fact the Liberals held the east without too much erosion was a sign the government would remain in power.

In Quebec, Bloc Quebecois Leader Yves-François Blanchet tapped into the same sovereignty sentiment that brought Premier François Legault to power last year and put a dent in the 40 seats the Liberals had going into the 2019 election. The Liberals held on to power in Quebec, but the Bloc severely diminished their stronghold, winning 32 seats of 78.

Blanchet, who won his riding of Beloeil-Chambly nearly 17,000 votes ahead of the second-place Liberal candidate, took the stage in Montreal to cheers, noting many of his supporters were young people. He acknowledged the people he said laid the groundwork for the party’s success, namely former premier Rene Levesque, Bloc Quebecois founder Lucian Bouchard and former BQ leader Gilles Duceppe. But he struck a defiant note, perhaps because of his new role as a power broker, saying the party would only vote with Quebec’s best interests at heart.

“The Bloc Quebecois does not want to form a government or even participate in a government, however the Bloc Quebecois can cooperate with any government. If what is proposed is good for Quebec, you can count on us. If what is being proposed harms Quebec, the Bloc will stand up and block it. If the government can be talked to and reflects the temperament of Quebecers then the Bloc will also be a party one can talk to. Except if we’re talking about putting more oil across Quebec. Except if it means compromising our values, our language or Quebec’s commitment to secular public institutions.”

As with all elections, the path to victory goes through Quebec and Ontario. Despite a strong showing in the polls, we saw the collapse of the NDP, which many thought would score deep cuts in the Liberal majority. That didn’t play out, and the evaporation of NDP support benefited the Liberals. In many ridings in Ontario, voters cast their ballots strategically, forgoing the NDP in order to keep the Conservatives out of power.

Although Scheer spent most of the campaign hurling invectives at Trudeau, he failed to convince the electorate that he was the clear choice for Prime Minister. First there was the dithering over the abortion question. Then came the revelation that he exaggerated his insurance credentials, as well as hiding the fact that he was a dual U.S.-Canadian citizen. Then, late in the campaign, it was revealed that the Conservatives  hired a consulting firm to “seek and destroy” Maxime Bernier’s People’s Party of Canada, removing the possibility that it would strip votes from the Conservatives. Bernier lost his seat in the Quebec riding of Beauce to Conservative Richard Lehoux, and couldn’t break through on any other fronts.

The NDP’s Singh had disappointing showing. His campaign got off to a slow start, but he rebounded after facing overt racism with hugs and sterling performances in two English debates. It was a case of too little too late, and predictions that he would form a minority government with the Liberals dissipated as poll results rolled in.

Despite losing 15 seats — going from 39 to 24 — the NDP is in the most powerful position it’s ever been in federally. Because it is more ideologically aligned with the Liberals, Trudeau will call on them to form a political firewall to hold off any potential Conservative-Bloq Quebecois alliance.

In his Burnaby, B.C. riding, Singh and his wife came into the room with his trademark dance, acting like winners, with big smiles on their faces, despite coming in fourth place. “Oh man, the love,” he said. “The love is real.”

He said the party would fight for Indigenous rights, and for publicly funded, national pharmacare. “Here’s what the New Democrats are going to seek to do when we work with other parties, this is our commitment: If you need medication, we want to make sure you use your health card, not your credit card.”

Singh said he talked to Trudeau earlier in the night, and let him know the NDP Members of Parliament will deliver on the priorities they campaigned on.

“Every single day we are in Parliament, New Democrats are going to be working hard to make sure that your life is better, that Canadians’ lives are better, that people’s live are better.”

The Green Party under Elizabeth May, which went into the election with high hopes after seeing double-digit support in the polls and amid a climate of concern over global warming, ended the night as a victim of strategic voting.  The party won just three seats — one more than 2015 — in Fredericton, Nanaimo-Ladysmith and May’s riding of Saanich-Gulf Islands. (Her husband, John Kidder, lost in his B.C. riding of Fraser-Nicola.)  But on the upside, the Greens almost doubled their share of the popular vote, with 6.2 per cent compared to 3.5 in 2015.

The big takeaway is that election night was much like the campaign — uninspiring and divisive — and Canadians retreated to their corners. The question is whether Trudeau can rise to the occasion and create a working coalition, not to mention address the governing style  that cost him the majority.  As Blanchet said, no one wants another election in 18 months, but there’s no guarantee Canada’s not headed that direction. As Scheer made clear in his speech, saying when, not if, Trudeau’s government will fall,  “Conservatives are on the march.”