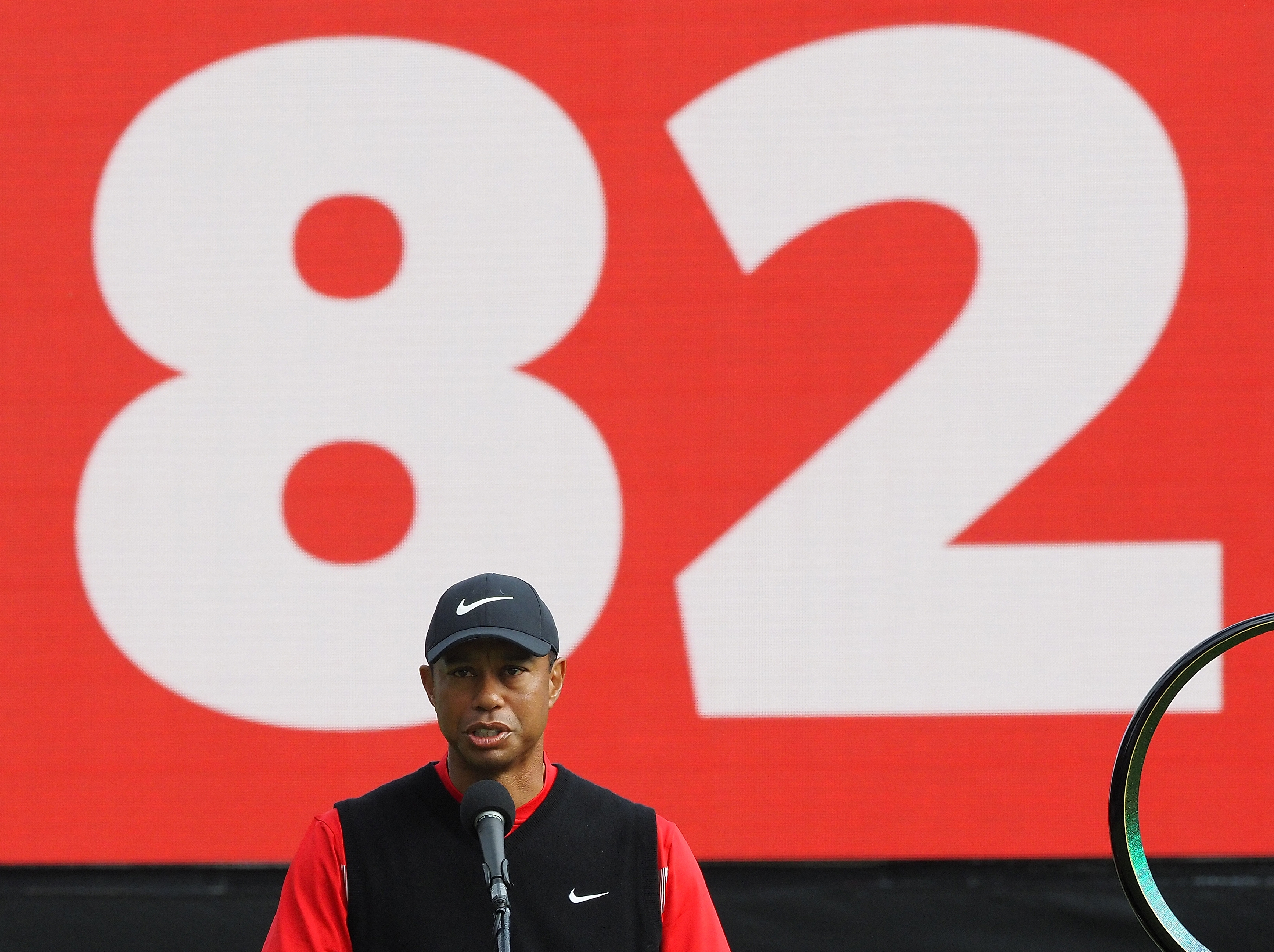 If the stunning amazing accomplishments that unfolded in the field of professional sports scene last weekend are a barometer of things to come, we may indeed be entering a golden age for older athletes.

Let’s recap the major accomplishments first. On Sunday, the ageless 42-year-old quarterback Tom Brady threw two touchdown passes, leading his New England Patriots in a victory over the Cleveland Browns. Then on Monday, 43-year-old Tiger Woods continue his return to dominance by finishing first in the Zozo Championship in Japan, securing his 82nd PGA tournament win, tying him with Sam Snead for most all time.

What in the name of Gordie Howe is going on with older athletes in pro sports? How is it that these 40-something athletes are still contributing at an age when most of their peers are either hobbling around on injury-damaged knees or yakking in the broadcast booth regaling fans with stories of their glory days?

Entering as the leader in the final round of the Zozo Championship in Japan, Woods carded a 3-under 67 to win the tournament and tie golfing legend Sam Snead with 82 wins on the PGA Tour. Woods, who was coming off knee surgery two months ago, had all parts of his game working in his three-stroke victory. The win not only tied Tiger for first place on the all-time list, but it also vaulted him to sixth place in the current world rankings.

Woods not only appears to be completely healthy, looking physically like his 20-year-old self and full recovered from his back-fusion surgery in 2017 that, at the time, seemed like a career-ender. Besides being in top physical form, he seems to have completely rebounded psychologically from a series of incidents that sent his career into a tailspin – his alleged extramarital affairs on then wife Elin Nordegren in 2009 as well as injuries sustained in a late-night car crash outside his Florida mansion and the DUI charge (later reduced to reckless driving) he incurred in Florida in May 2017.

At the time, these incidents took a heavy physical and emotional toll, and it seemed to many that his marvellous career was over. And while it took a while get his life – and his game – back in order, he has finally climbed that mountain and is winning tournaments again.

Although he’s famously guarded about sharing his diet and workout routine, he says he’s no long following the ridiculous regimen that included four hours of running, several hours of weightlifting, several hours practising his shots topped off by another few hours running.

Whatever he’s doing today, it’s working. The video below of Woods goofing around with young Japanese golfers is revealing of two things: (1) he looks to be in ridiculously good physical shape, similar to where he was at in his 20s; (2) he has shed the mental baggage that he has carried around since his divorce scandal.

Woods will never again be one of the longest drivers on the tour, but he’s discovered a mental edge that compensates for the physical loss due to aging. He uses his experience to help complement all other parts of his game. “The body can’t do what it used to,” Woods told reporters after securing his historic victory, “but I can still think my way around the golf course.” And he’s definitely optimistic that he can continue at the top of his game for a few more years – “As far as playing until 52, I hope that’s the case.”

If you think Tiger’s plan to play into his 50s seems absurd, it’s also shared by another of this past weekend’s stand-out oldies, Patriots quarterback Tom Brady. Now in his 20th season, playing against the tough defence of the Cleveland Browns on a rain-soaked field, Brady was his usual efficient self that led to a 27-13 victory.

Like Woods, Brady is a physical marvel, crediting his TB12 method that involves a focus on hydration, nutrition (no red meat), sleeping (in bed by 8:30) and lots and lots of muscle stretching for allowing him to extend his career. “I’m creating a version of me at 40, which I think is a lot better than me at 22,” he said in his Facebook documentary, Tom vs. Time. While Brady never had the strongest arm or amazing speed, it seems he’s somehow faster and stronger as the years have progressed. In the battle of Tom vs. Time, the hands-down winner is Tom, who seems to be improving with age.

And although Brady has been fairly lucky in escaping the physical and emotional punishment that has bedevilled Woods throughout his career, he has had to compensate for the loss of speed, power and muscle tone that comes with age. Like Woods, he has seemingly mastered the mental side of the game. It’s like watching an artist play the position, throwing accurately, avoiding sacks and making all the right decisions. Besides throwing for two touchdowns, he used his unparalleled leadership abilities and veteran decision-making skills to lead the Pats to a convincing win. Brady is now 8-0 on the season.

Brady often points to 45 as the age to which he’d like to be competing for more Super Bowls. But playing in a violent sport like football, he’s obviously realistic: “One day I’ll wake up and I’ll feel like ‘Okay, that’ll be enough,’ and when that day comes, that day comes. I don’t know if it will be after this year. I don’t know if it will be five years from now. I don’t have to determine those things now, either. That’s kind of the part where I’m at.”

Sure his beard’s a little grey now and the hair’s thinning on top, but that’s the only giveaway that he’s reached his fourth decade. Not only that, but he’s retained his passion for the game, something the constant training, travel, video watching, not to mention surviving in the cruel business of pro sports, that often squeezes the life out of many athletes just a few years into their careers. He’s won six Super Bowls already and he’s hungry for a seventh. It’s impossible to teach that competitive spirit. Does this look like a 42-year-old athlete?

A golden age for older athletes

Lest you think Tiger and Tom are generational outliers in pro sports, two superstars who have bucked the odds in the battle against Father Time, a casual look around at professional sports reveals they’re just the most visible of a new wave of old-age warriors excelling in almost every sport. Take a look at some other accomplishments this weekend alone. On Saturday, 38-year-old tennis great Roger Federer crushed 20-year-old Australian opponent Alex de Minaur (who was not even born when Federer played his first pro match), prompting the defeated opponent to quip, “I was really hoping that Roger was going to get sick of winning here and give someone else a chance,” De Minaur said during the trophy ceremony. “Too good again. That was amazing.”

On the basketball court, 42-year-old Vince Carter entered a game for the Atlanta Hawks, becoming the first NBA athlete to play for 22 seasons. If Carter, who said he’s working “to keep my body right” so he can play in all 82 games, manages to come up with a performance like the one he had against the New York Knicks in the pre-season, he might just do that.

And then there’s the oldest of the bunch, 46-year-old Adam Vinatieri. The eternal kicker who, during his 24 seasons, has hit the most memorable field goals and holds most of the NFL records for that position, booted a game winning field gaol in the final minute to catapult his Indianapolis Colts to victory. Vinatieri’s kick wasn’t a chip shot – it travelled 51 yards. He has recently come under withering criticism for his declining performance, with many saying he’s too old to perform. But watching his cool, confident fist-pump after making the clutch kick on Sunday, it was clear Vinny wasn’t just punctuating this particular victory – instead, he was celebrating the fact that, despite his age, he’s still able to win games and proving his doubters wrong.