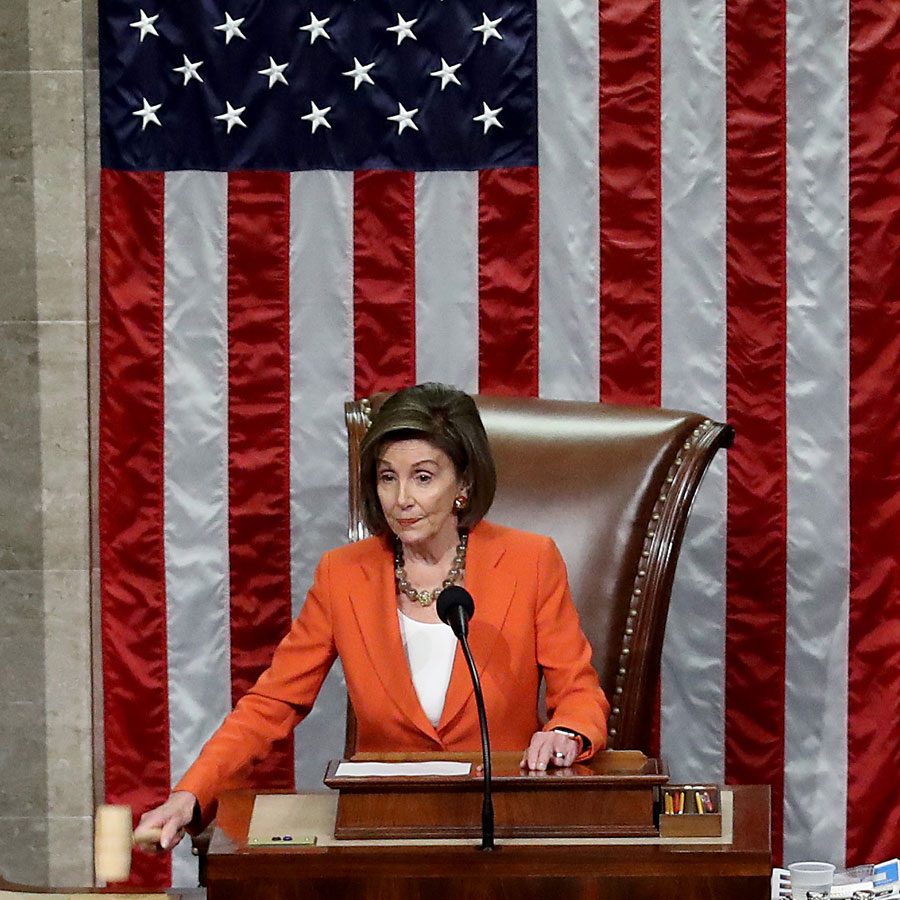 U.S. House Speaker Nancy Pelosi gavels the close of a vote by the U.S. House of Representatives on a resolution formalizing the impeachment inquiry against President Donald Trump, October 31, 2019 in Washington, DC.(Photo: Win McNamee/Getty Images)

Standing beside an American flag, House Speaker Nancy Pelosi called on her colleagues to vote on the resolution that sets up formal ground rules for the public phase of the impeachment enquiry process to begin.

If impeached, Trump would join Andrew Johnson (for corruption charges in 1868) and Bill Clinton (for perjury and obstruction of justice in 1998) as the only Presidents to face such inquiries. Richard Nixon would surely have been impeached in 1974 for his role in Watergate had he not resigned before the Senate voted. Trump becomes the first President to be formally investigated for breaking Article II, Section 4 of the U.S. Constitution, “Treason, Bribery, or other high Crimes and Misdemeanours.”

The so-called impeachment resolution, which was was passed largely along partisan lines, formalized the the next phase of the investigations into “whether sufficient grounds exist” to impeach President Trump.” It’s important to note that although this resolution doesn’t guarantee that the House will file articles of impeachment against the president nor does it make the case against the president stronger, it’s a big step in laying out the conditions on getting down to the business of moving the impeachment forward.

House Rules Committee Chairman James McGovern called the resolution “a clear path forward” as the inquiry decides whether to impeach the president over a phone call he made in July, pressuring the Ukrainian president Volodymyr Zelensky for a “favour,” asking him to investigate corruption charges against former Vice-President Joe Biden, who is now running for the Democratic presidential nomination.

“For all the disagreements I have with President Trump, for all his policies, his tweets and his rhetoric that I deeply disagree with, I never wanted our country to reach this point. I do not take any pleasure for the need of this resolution,” McGovern said. “We are not here in some partisan exercise. We are here because the facts compel us to be here. There is serious evidence that President Trump may have violated the Constitution.”

In August, the impetus to impeach Trump exploded in Washington when an unidentified whistle-blower wrote a letter to the Inspector General of the Intelligence Community, expressing concern that the president had used his position to “solicit interference from a foreign country” in order to besmirch Biden’s name, thereby weakening his chances in the 2020 election.

In the transcript of the infamous phone call, Trump requests Zelensky to launch an investigation into the role Biden played in squelching a 2016 inquiry into his son Hunter, then a board member for Ukrainian energy company Burisma. This request of a “favour” was seen as an attempt to undermine Biden’s campaign for the 2020 Democrat presidential nomination, thereby eliminating a popular rival from the field.

Today’s vote is a clear attempt by the Democrats to bring the inquiry out into the open, countering Republican criticisms that it’s been an unfair trial taking place behind closed doors. Before the resolution even passed, House Intelligence Committee Chairman Adam Schiff has been busy hearing testimony from a number of top officials, including Bill Taylor, acting ambassador to Ukraine;  Tim Morrison, the senior director of European and Russian affairs at the National Security Council; and Kurt Volker, special envoy to Ukraine. John Bolton, Trump’s former national security adviser, has also been summoned to appear before impeachment investigators.

With the walls continuing to close in on the embattled president, Trump issued a series of Tweets calling the investigation an “impeachment hoax” and a “showtrial” aimed at overturning his election in 2016. Republican lawmaker Tom Cole (Okla.) echoed the president and other members of his party by calling the rules of impeachment passed by the Democrats are unfair. “In my view, it’s not a fair process, it’s not an open process, it’s certainly not been a transparent process. It’s been limited and closed, and frankly I think we’re moving toward a preordained result.”

And House Minority leader Kevin McCarthy said the vote was just another part of the Democrats “permanent campaign” to unseat the president because they are “scared they cannot defeat him at the ballot box” next year.

A short history of impeachment