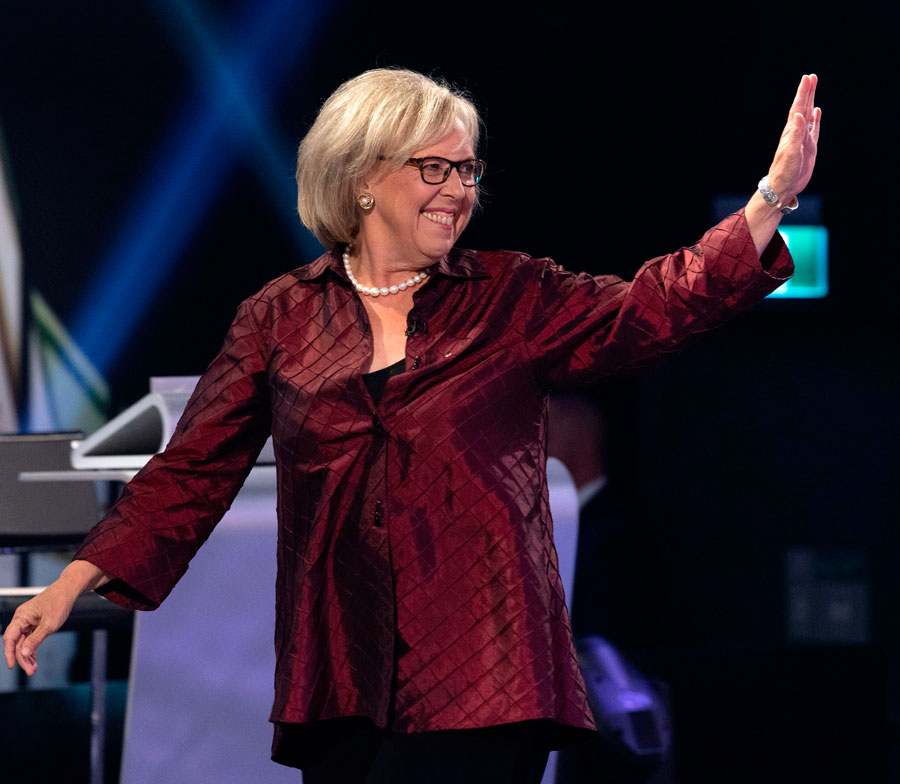 Elizabeth May, pictured here at the 2019 English-language federal election debate, resigned today as leader of the Green Party. (Photo: Adrian Wyld/Pool/AFP via Getty)

Speaking in Ottawa today, Elizabeth May resigned as leader of the Green Party after 13 years at the post.

The 65-year-old May, who helped the fringe party break through onto the national political scene, said that the time was right. “I wanted to choose a moment where we had a lot of success before leaving.”

With husband John Kidder at her side, May said in her brief press conference that Jo-Anne Roberts, who ran but lost in Halifax in the recent election, will take over as interim party leader. Roberts told the press conference that the Green Party will begin its search for a candidate “who will take the party to the next stage.” The party will elect a new leader at its 2020 convention in P.E.I.

A passionate advocate for the environment, in 2006 she left as head of Sierra Club Canada to take over as Green Party leader. During her term as leader, May helped establish the Greens on the federal scene, which was borne out by her successfully lobbying to be included in the nationally televised federal debate.

Her folksy style and her earnest support for climate change seemed to work well with Canadians, with polls continually citing her as the most ethical of the federal leaders. But her sometimes condescending manner and bizarre off-the-cuff statements didn’t sit well with party insiders. Besides getting bogged down in issues like abortion and Quebec’s Bill 21 (which bans religious symbols) and offering some quirky platforms – like her much ridiculed Robot Tax that inspired the social media hashtag #DizzyLizzy – May was never able to convince voters that the Green Party offered anything beyond environmental solutions.

While May is vacating her post as party leader, she noted that she’s “not stopping my work – the climate crisis is as critical as ever.” She will continue serving her B.C. riding of Sannich-Gulf Islands, which she has held since 2011, as well as becoming the Green Party’s parliamentary caucus leader.

The fact that the Greens have a party caucus of only three is likely the main reason behind her choice to leave. In the lead-up to the Oct. 21 federal election, the environment became a key issue for voters, prompting many supporters to believe the Greens were on the verge of a major breakthrough.

When the votes were counted, the Greens added one MP (bringing its total to three) and almost doubled its share of the popular vote (from 3.5 per cent in 2015 to 6.5 per cent in 2019). However, this was far below expectations, and the fact that they failed to make any gains in Ontario or Quebec made matters worse. Many saw this as a poor showing and, when that happens in  politics — as the Conservative’s Andrew Scheer can attest — the leader bears the full brunt of the blame.

May’s feeble attempt to spin the Greens’ poor showing during her election night speech – “We never had as many finishes in close seconds” – was not perceived as a rallying cry for the party’s future. And, over her 13 years as party leader, she simply didn’t have any real signs of progress — she took the Green Party from a distant fifth place to a not-so-distant fifth place. It was this failure to deliver tangible results that sealed her fate as leader.

And after the election, when May publicly dithered on whether she would step down as leader, a rebellion started growing in the ranks. Quebec’s Green Party leader Alex Tyrrell, among others, circulated an online petition called Greensrising  – demanding a leadership review to “seek input from the membership as to where the party should go from here.”

A potential successor to May, Tyrrell praised May term as leader but hinted that she failed to resonate with younger, more progressive voters, “We’re faced with a rising youth-led climate movement. People are asking for somewhat more radical solutions to the climate crisis.” he told the CBC.

May obviously saw the writing on the wall and decided to clear out before she was thrown out. She actually foretold her decision days before the election in a lengthy Globe and Mail profile in which she mused: “I’ve always contemplated quitting – it’s one of my happy places. I don’t like politics and I have always believed no one should stay in a position too long.”