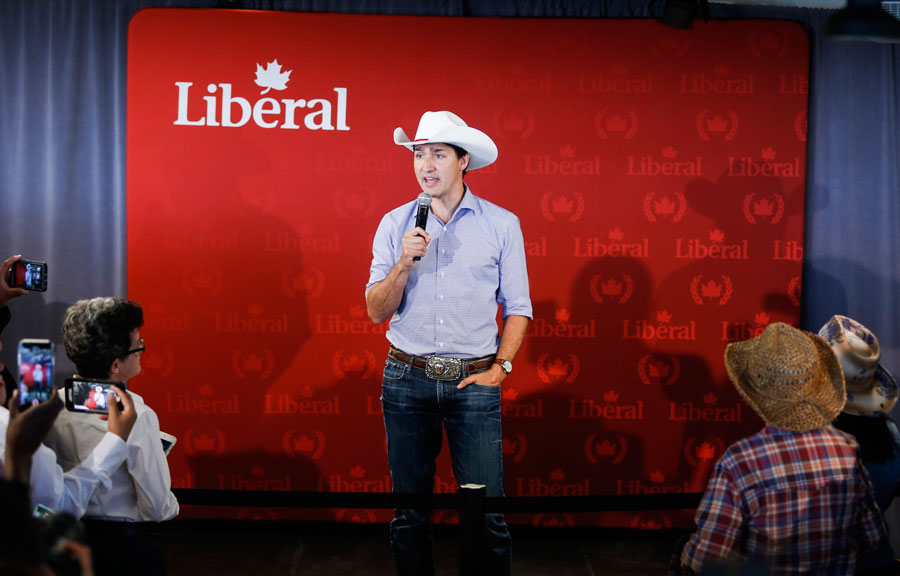 Prime Minister Justin Trudeau must do more than just pose with a cowboy hat if he wants to soothe Western anger directed toward the federal government. (Photo: The Canadian Press/Jeff McIntosh)

Peter Downing, founder of the Wexit (Western exit) separatist movement, has noticed a sense of frustration festering among a growing number of Westerners over the last few years.

With the downturn in the economy, caused by tanking oil and gas prices that led to high unemployment, a pipeline expansion tied up in regulatory hell and a hate-on from environmentalists who would love nothing more than to see the fossil fuel industry wither and die away, Downing feels the whole Western way of life is under threat.

Many Westerners share that view believing that their self-identity is inextricably entwined with the fortunes of the oil patch. As such, they take anything that threatens their livelihood personally. Since the days of Pierre Trudeau’s hugely unpopular National Energy Program, there’s been a deep suspicion in the West that Ottawa doesn’t have its best interests at heart. And the paranoia only grew this year when the Liberal government passed Bill C-69 (the so-called “pipeline-killer” legislation that creates more environmental red tape) and Bill C-48 (the law that bans oil tankers from the north coast of B.C.) — which some  saw as a double-barrelled assault on their way of life.

It certainly didn’t help matters when Encana, one of Western Canada’s oldest energy companies, announced on Halloween that it was moving to the U.S. to attract more investors. Alberta Premier Jason Kenney was quick to blame federal regulations and environmental negativity towards the oil industry. “It’s not just about Encana,” Kenney told The Globe and Mail. “It’s about the broader decline of the Canadian energy industry, which I think is a deliberate policy of the Trudeau government.” Ted Morton, former Alberta finance minister, called the oil company’s departure a “crisis,” saying that “people are losing their jobs, people are losing their houses.”

But the calamitous event that caused the latest paroxysm of Western separatist fervour arrived the night of Oct. 21, when Canadians returned the much-reviled Justin Trudeau to power. The fact that his Liberal Party won the election despite finishing behind the Conservatives in the popular vote and that they managed to orchestrate the victory without wining a seat in either Saskatchewan or Alberta just poured more fuel on the fire.

“I predicted that if Trudeau was re-elected, Western separatism would explode overnight,” says Downing, a 37-year-old, ex-military and RCMP constable who claims Wexit’s social media membership grew by a quarter of a million in the days following the election. “We knew it was going to happen, we just didn’t know how big it would turn out to be.”

For Downing, Wexit is not just an idle threat born out of frustration at the West’s lack of political representation in the new government. The organization’s somewhat ill-defined manifesto calls for, among other things, the abolishment of the GST, reduction of taxes, an end to investment in wind and solar energy, control of immigration and health care. But its main demand, boldly stated, is “A Universal Declaration of Independence from Canada.”

Downing says he’s completely given up on the notion that the West can work within Canada to improve its lot. “I’m done with federalism — 100 per cent,” he says. “Everyone else has tried other options and failed. The West wants to separate from the political and economic control and domination of eastern Canada so that we can have a better place to live in. We’re moving toward separation.” (When Downing says “the east” or “eastern Canada,” he’s usually referring to Quebec and Ontario voters who put Trudeau back in office.)

While resentment against the Montreal-Ottawa-Toronto axis of power is felt by many, Lisa Young, a professor at the University of Calgary’s School of Public Policy, suggests the call for separation from Canada is not shared by every Westerner. “Yes, there’s a fairly widely held sense of discontentment and alienation,” Young says. “And at the extreme end of this movement are people who are prepared to organize to try to act on the idea of separation.”

Like the boom-bust nature of an oil-based economy, Young claims that, since the 1970s, Western discontentment with Confederation has waxed and waned depending on who’s in power in Ottawa. “There’s a deeply held sense that small-c conservatism and being Western are closely linked identities. So, whenever the Conservatives are not governing, then Westerners feel left out.”

But the level of noise regarding separation seems to be at an all-time high, even more so than in the early 1990s when the Reform Party emerged from the cinders of Brian Mulroney’s decimated Progressive Conservative Party and shook up the political landscape. “That’s because on top of the regular pattern of rising and falling alienation, we also have economic dislocation that is really quite unlike anything we’ve seen ever in this economy,” says Young.

Downing agrees. “This isn’t just about political power — it’s a real people issue.” He says the federal government has completely ignored the fallout from the faltering regional economy, which he believes has resulted in layoffs and caused a spike in suicide rates, divorces, domestic abuse and alcoholism. “It’s tearing at the fabric of our homes and neighbourhoods.”

Young adds that because the economic turmoil is exacerbated by political isolation, one study shows support for federalism is even lower in the West right now than it is in Quebec. Earlier this year, the Environics Institute released an aptly named report called Canada: Pulling Together or Drifting Apart?

With anti-government fever running at an all-time high, it’s no wonder Downing wants to strike now. But while he builds his movement regionally, he’s also wants to mobilize federally to cancel out the concentration of political power in the east.

To accomplish this, he envisions creating of a sort of Bloc Quebecois, a western separatist party that would run in federal elections and represent Manitoba, Saskatchewan, Alberta, B.C., Yukon and Nunavut. Under his proposed alliance, Ontario would still have 121 seats and Quebec 77, but the West would now form a 104-seat power base. Downing counters a suggestion that this sounds very much like the return of the Reform Party. “The Reform Party said the West wants in [Confederation]. Wexit says the West wants out.” He’s not sitting still: on Nov. 4 he sent in the papers to Elections Canada to register Wexit Alberta as an official federal party.

It’s easy for many easterners to write off Wexit supporters as a bunch of pick-up-driving, Stetson-wearing, Trudeau-hating yahoos.  On Twitter, snarky Liberal supporters deride Wexit as a Trumpian-inspired movement, dubbing it #Rednexit or #Blocrednecois. The fact that Downing wears a “Make Alberta Great Again” baseball hat doesn’t exactly help dispel this notion. Downing, who’s heard the comparisons before, disagrees. “This is a mainstream movement,” he says. “We’re professionals. We have the talented, dedicated people who share the same values.” And while “our biggest diehard supporters are 50-plus,” he says the movement has a strong youth contingent as well.

Young concurs that Wexit supporters are not just a small segment of the population. “There are people who are well educated, community leaders who are actually starting to say out loud, ‘We’re not getting enough from Confederation.’ It’s not something you would have heard here a few years ago.”

The big unknown about the sudden rise in Western self-determination is whether it’s just a spasm of frustration spilling over from an unacceptable election result or if it’s based in more deeply rooted feelings. Will the impetus behind the movement fade once the economy improves and the pipeline to B.C. gets built? Or has the federal government ignored Western interests too long and there’s no going back?

Downing, for one, believes Wexit’s time has come. “Justin Trudeau is not going to change. The political institutions in Canada are just not going to change.” Nor does he think Premier Kenney understands the extent of outrage. In fact, he wants to upend Kenney’s proposed referendum next year on equalization payments (the federal formula that forces so-called “have” provinces like Alberta and Saskatchewan to pay into a fund to support the “have-not” provinces) into a debate on separation.

With Wexit rallies drawing more and more interest — close to 700 turned up for the Nov. 2 Edmonton event and over 1,000 are expected for the Calgary one  — there’s no telling how far this movement will go. Downing is bullish on its chances. “By the grace of God we’re going to see the rise of the republic of Western Canada within our lifetime.”

Trudeau is keenly aware of the rise of Western affront, what Conservative leader Andrew Scheer is calling “a growing national unity crisis,” evoking painful memories of past sovereignty battles in Quebec. The Prime Minister only has to look at the 2019 electoral map to see that Western alienation is real and that the No. 1 priority of his newly formed government is to figure out a way to soothe hurt feelings.

He pointedly reached out to the West in his election-night victory speech, acknowledging, “I’ve heard your frustration and I want to be there to support you. Let us all work hard to bring our country together.” He has placed calls to Western mayors and appointed Anne McLellan, former Liberal MP from Edmonton, to advise him on the region.

It’s a start but the ball remains in Trudeau’s court. He can either ingore Wexit at his peril or he can fulfill his election-night promise to “work hard” on mollifying Western anger. Either course, it seems, will have major implications, not only for the lifespan of this minority government but on the future of Western Canada as well.