Scheer Survives Palace Coup to Remain Conservative Leader – But For How Long? 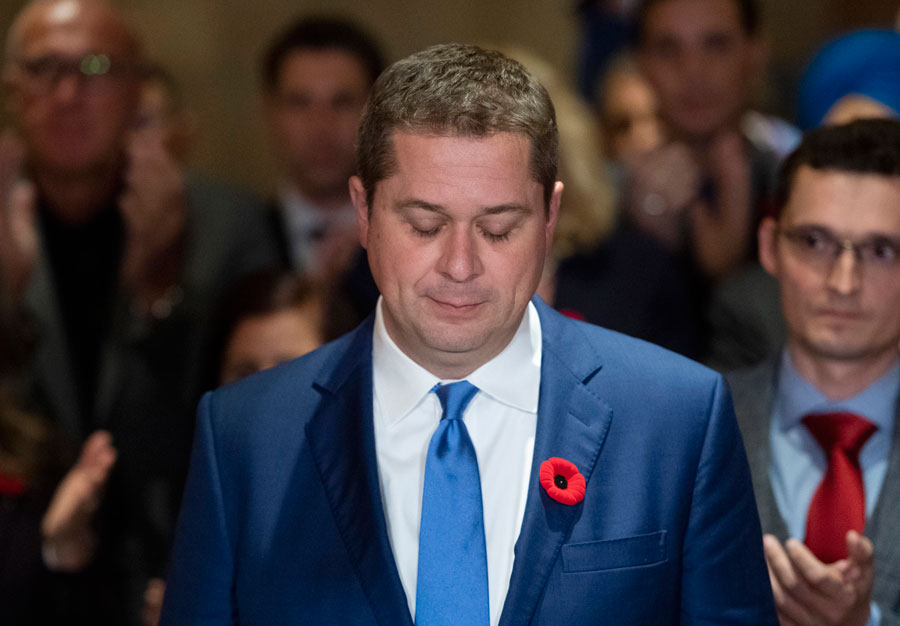 Andrew Scheer speaks to reporters following a testy Conservative caucus meeting in Ottawa where he argued why he should stay on as leader. Photo: The Canadian Press/Justin Tang

Andrew Scheer survived a caucus coup attempt yesterday and will remain on as Conservative leader, at least for the time being.

A chastened Scheer emerged from the seven-hour long and reportedly noisy caucus meeting in Ottawa where he defended his leadership by facing down criticism and questions from the party establishment on the mistakes he made that led to Conservative Party’s poor showing in the Oct. 21 election.

“Nobody is more disappointed in the results than me and nobody is more eager to get it right the next time,” Scheer told reporters after he emerged from the meeting. And while he was surrounded by his whole caucus, there is a growing sense that, despite this public show of unity, he’s lost the backing of some key players in the party.

While his party did manage to up its seat count in the recent election (from 99 in 2015 to 121 this year) and win the popular vote, finishing a distant second place to Justin Trudeau’s Liberals left a bitter aftertaste. With Trudeau reeling from the SNC-Lavalin and blackface scandals, the pieces seemed to be in place for a big Conservative breakthrough. The fact that Scheer couldn’t take advantage of the situation not only reflected poorly on his effectiveness as a leader but raised concerns about the merits of his campaign advisers.

Surviving the initial coup attempt, he now embarks on a “listening tour,” visiting Conservative constituencies and riding associations across Canada and meeting with the grassroots members of the party. At each of these stops, Scheer will likely encounter the same dissatisfaction and questions he faced in caucus yesterday, including:

If Scheer can answer these questions in forthright and convincing fashion, he may be able to silence his detractors and hang on to his role as leader. But if he fails to provide reasonable explanations and can’t convince the party grassroots that they can defeat the Liberals with him at the helm, the rebellion that’s now simmering  behind closed doors could explode at the party’s convention next April, where he’ll undergo a formal review of his leadership.

“Conservatives only win when we are united. And we always lose when we’re divided,” said Scheer. But with mounting concern that it’s Scheer’s role as leader that’s dividing the party, it seems unlikely he’ll survive past April.