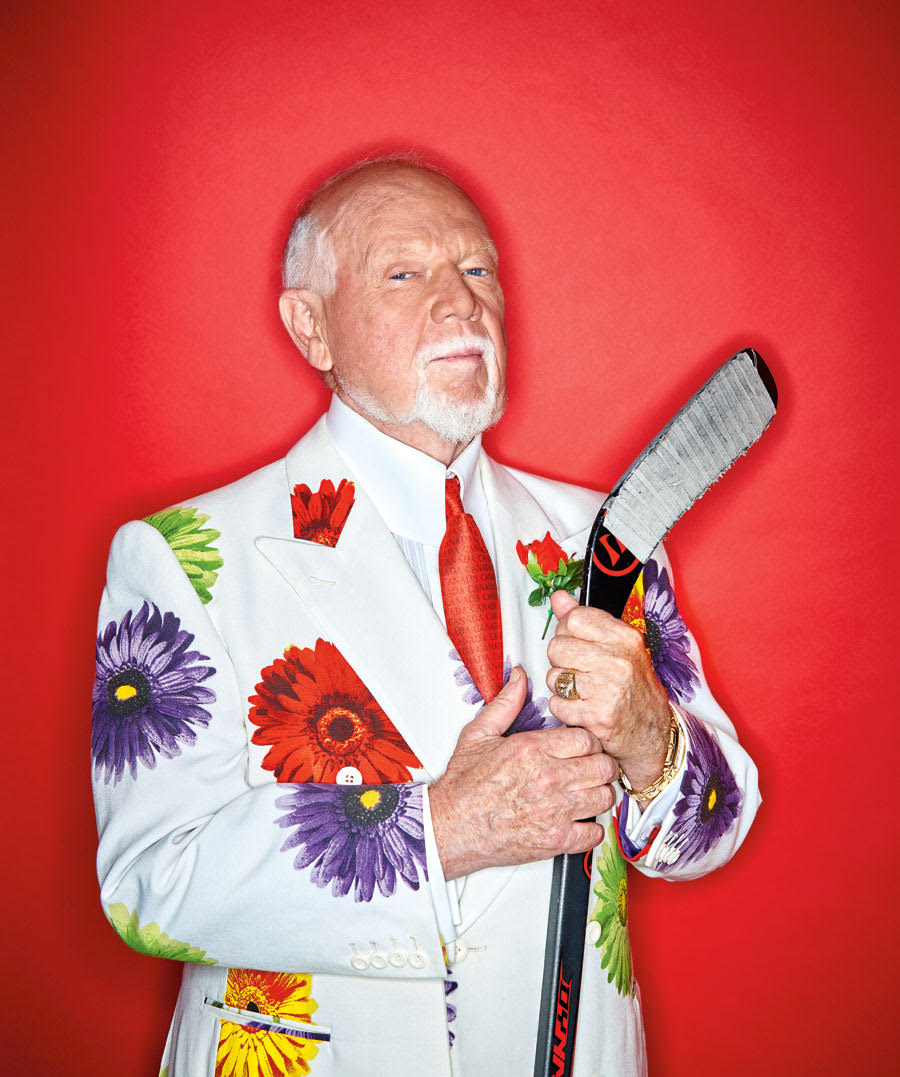 In the abundance of interviews Don Cherry has given since he was fired from Coach’s Corner, he’s made one thing very clear: an apology isn’t coming.

Instead, Cherry says he wished he had chosen his words more wisely.

“I think the closest I’ll come to apologizing is I wish I had used different words,” Cherry told Global News.

On Monday, Sportsnet announced the firing of the long-time host of Coach’s Corner in response to a televised rant in which he singled out immigrants in Toronto and Mississauga for not wearing poppies.

Specifically, the popular television personality told CTV News that he wished he “had used something else besides ‘you people.’ I think I would have said everybody should be wearing a poppy.”

While he regrets his phrasing, Cherry still refuses to admit he was singling out immigrants in his rant.

Claiming his words were not meant to be bigoted, he told CP, “I did not say minorities, I did not say immigrants. If you watch Coach’s Corner, I did not say that. I said ‘everybody.’ And I said ‘you people.’” The message was aimed at encouraging more people to support our troops. But Cherry asserted that he would not backtrack or apologize for his comments. “I speak the truth and I walk the walk,” he said about his beliefs.

“I can see how it hurt some people, I can really see it.”

Former Mississauga Mayor Hazel McCallion also believes that Cherry’s wrongdoing boils down to poor phrasing, telling Global News Radio AM640 that Cherry is “not a racist” and “could have used some better words.”

Cherry called the last few days “surreal” and said he offered to apologize during his next Coach’s Corner segment, but that Sportsnet wanted more.

“I volunteered to apologize but it wasn’t enough. I can’t tell you what they asked me to do after that but I said I wouldn’t do it.”

Cherry said if he agreed to their demands he would not have been fired.

“I would rather go out on a high. I never back down.”

“We could have worked something out Saturday but they didn’t want anything to do with that.”

Cherry also told Global News that he was “disappointed” in his co-host Ron MacLean — who apologized for his part in the rant — but said that they were still friends.

As to being fired, Cherry regretted that it had to fall on Remembrance Day but that he would not be silenced by the networks or political correctness. “To keep my job, I cannot be turned into a tamed robot,” he said in the wake of his dismissal.

In the past Cherry has come under fire for making xenophobic comments about the supposed lack of toughness of European and French players but was never given more than a slap on the wrist. It’s also curious that because Coach’s Corner is taped every Saturday, Sportsnet chose to run the segment in three regional games without seeing anything wrong with it. Will the producer or director who made that decision also be called to the carpet?

While many individuals sprang to Cherry’s defence, the Royal Canadian Legion — the very organization that Cherry was trying to support — chose to distance itself from the comments.

1/2
Mr. Cherry’s personal opinion was hurtful, divisive and in no way condoned by the Legion. We do remain appreciative of his passionate support for Veterans.

Everythingzoomer.com’s Facebook page lit up with comments, with many sharing their opinion on Cherry’s comments.

Here’s a sampling from those who thought Cherry should be fired:

Judy O’Neil Telford “I believe in freedom of speech, but Mr. Cherry was out of line His job is to discuss/analyze hockey, not to share his views on his political opinions.”

Judy Lamarche “If he had apologized (sincerely) maybe then a warning might have sufficed. But he made no effort to apologize — that speaks directly to his character and beliefs. There is no place for his racism on the airwaves!”

Carol Moran “He ‘went a little too far’ this time because he was allowed to all the other times. Sorry that it had to be this subject that was picked to use to fire him.”

Charlene Beauchemin “He could have stuck to talking about how there are not enough people wearing poppies. I can get behind that. But he went too far by singling out ‘you people who come here.'”

And here’s the commentary from the many who supported Grapes:

Marilyn Harris Smith “Don is so right! He speaks from the heart, all he is saying is everyone everywhere can show their respect with the poppy all the time!”

Judy Neal “Nothing to apologize for!! He spoke his truth. Good for him.”

Brenda Clayton “He always spoke his mind. None of us may agree but I give him credit for saying what he felt.”

Cynthia Kay “So much for freedom of speech. Ron McLean threw Mr. Cherry under the bus. Shameful!!”

V Vee Ann “Oh come on … political correctness wins again. I am not a fan of Don, yet I feel that he was speaking his truth. Being fired is uncalled for.”

It’s the end of an era in hockey broadcasting as Don Cherry, one of Canada’s best-known TV personalities, has been fired for making divisive comments disparaging immigrants in his weekly Coach’s Corner.

Cherry, 85, whose popular segment ran for nearly 40 years every Saturday night during hockey season, was let go today by Sportsnet after calling out new Canadians for refusing to buy poppies to support our troops.

“I live in Mississauga, very few people wear a poppy. Downtown Toronto, forget it, no one wears a poppy. You people, that come here, whatever it is … you love our way of life, you love our milk and honey, at least you could pay a couple bucks for a poppy or something like that. These guys paid for your way of life that you enjoy in Canada, these guys paid the biggest price.”

Cherry’s invective, which touched off a firestorm of criticism on social media for its racist implications, was clearly aimed at newcomers to this country who he believes, by neglecting to wear a poppy (with no proof that members of these communities don’t), are ignoring the sacrifice paid by soldiers to allow them to live in peace and prosperity in this country. Even the many loyal viewers who either enjoy – or have become inured to – his bombastic style over the years felt that his “poppy” comments crossed a line that society is longer willing longer to tolerate.

Making controversial statements has always been Cherry’s bread and butter and have fuelled his successful career. And while some of what he’s said in the past has pushed the boundaries, his diatribe on Saturday night was seen as insensitive, hurtful and just plain wrong. Despite delaying their decision for a few days, his corporate bosses at Sportsnet had little choice but to fire him.

Cherry has been making the same pre-Remembrance Day proclamation for as long as anyone can remember. But this year, many felt rant came off as racist, especially when he singled out new Canadians (“you people”) as the ones who don’t wear poppies. His comments were branded as “despicable,” “prejudiced” and “racist” providing the impetus for Sportsnet to fire him.

The anger at Cherry’s comments not only blew up on social media but also overwhelmed the Canadian Broadcast Standards Council (CBSC) – the agency that deals with viewer and listener complaints – which issued a statement prior to his firing, saying it received so many objections to the Coach’s Corner segment that they exceeded “the CBSC’s technical processing capacities.”

And Bonnie Crombie, mayor of Mississauga (where Cherry lives), called his comments “despicable.”

But when long-time side-kick Ron Maclean, who has always defended Cherry’s right to express his opinion, distanced himself from the comments – calling them “hurtful” and “prejudiced” – it was clear that Cherry had no allies and the network was ready to pull the plug on Coach’s Corner.

While many support Cherry’s ouster, the opinionated broadcaster still has his defenders. A quick perusal of social media shows that many remain in Cherry’s corner despite what he said. While not agreeing with his garbled message, they backed him for supporting the troops. Another common theme was that if Justin Trudeau was allowed to apologize for wearing blackface, why shouldn’t Grapes be allowed to apologize for saying “you people.”

But Cherry hasn’t apologized yet, and it’s hard to imagine he will – saying sorry is not part of his makeup. It’s even possible he made the comments in an effort to juice the flagging ratings for Coach’s Corner, hoping millions would tune in to watch how he handled the fallout.

His weekly broadcasts made him an icon in Canada, garnering millions of viewers each week and making him a folk hero with many, who tuned in each week to watch the old warrior battle with management and the “left-wing pinko” media types trying to muzzle him from standing up for good old-fashioned Canadian values. He became so embedded in the culture that he was chosen by viewers as the seventh “greatest Canadian of all time” in the CBC miniseries The Greatest Canadian.

It’s a familiar formula that always worked – at least until today.  But times have changed, and so have the people who run hockey and sports broadcasting. Because, to television executives, Cherry’s hard-ass, take-no-prisoners opinions on hockey, patriotism and life in general had become as out-of-touch as the gaudy suits he wears or the hockey fights he loves to glorify.

And because playing this role appeals to an ever-dwindling audience, Sportsnet acted quickly and pulled the trigger – they finally had the iron-clad argument they needed to fire Cherry from his weekly pulpit.

For the past few years, they’ve been grooming Brian Burke, a gruff, opinionated but politically correct commentator, to eventually replace Cherry. This move not only makes the network look like they’re good corporate citizens but at a time when they’re losing audience share and revenue dollars, they can also get Cherry’s multi-million dollar salary off the books.

Saturday night hockey games will certainly be different now that Don is gone. Despite his out-dated – and often cringe-inducing – opinions, Cherry was always entertaining, never boring and could always be counted on to make a dull game more interesting.

But after nearly 40 years, perhaps it was time for a change. The one silver lining from this whole affair is that his replacement won’t be some millennial hipster commentator who puts everyone to sleep by spouting bewildering statistics and obscure acronyms. Brian Burke, Cherry’s heir apparent, is a hockey lifer whose feisty point of view should keep first-period intermissions fairly interesting. And the good news for Zoomers?  He’s 64.

The Icemen Cometh: The Enduring Success Of Don Cherry and Ron MacLean