Charlie’s Angels Then and Now: Farrah Fawcett, Feminism and the New All-Female Reboot 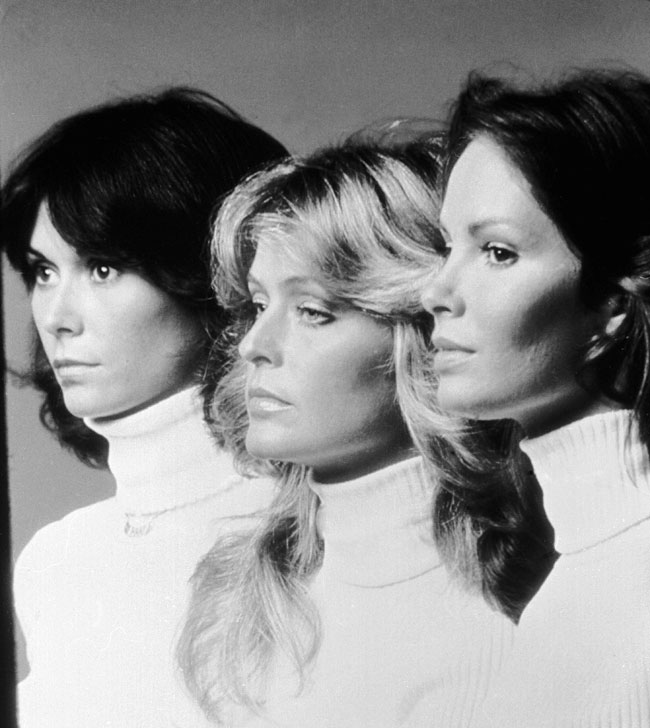 The opening credits of Charlie’s Angels made me a feminist. Okay, I exaggerate. But I was 14 when the first episode aired in September 1976, and that opening spoke to me.  “Once upon a time,” the voice-over began, like all good fairy tales, “there were three little girls.” “Little girls” — that’s obnoxious. But three female leads! That was exciting. These women were doing something, and they were doing it together.

We see them at the police academy, excelling at driving, shooting, and body slamming. Then we see the dull jobs their male bosses allow them to do: type paperwork, dispense parking tickets, shepherd school kids through a crosswalk. But Charlie, the owner of a high-class detective agency, he sees them. He sees what they can do. “Now they work for me,” Charlie purrs, and suddenly his Angels are shedding their police uniforms and slipping into designer duds; they’re slinking around racetracks and yachts; they’re brandishing pistols, yelling “Freeze!” and karate-kicking ass.

The lesson of those opening credits grabbed me: Women are underestimated; women should not be underestimated. And not just me: It propelled the series through five seasons and six different Angels. Twenty years later, the ongoing need for that lesson led Drew Barrymore to produce and star in two films (Charlie’s Angels, 2000; Charlie’s Angels: Full Throttle, 2003) and in 2011, to reboot the series. It lasted eight episodes, and is the only corner of the Angelverse that I haven’t explored.

Now, nearly 20 years after Barrymore’s films, we have another reboot opening Nov. 15, also called Charlie’s Angels, written, directed by and co-starring Elizabeth Banks. Its opening line — “A woman can do anything” — which undercover angel Sabrina (Kristen Stewart) coos to a rich jerk, is already catching flak for being too on the nose. But in a world where most women are lucky to make 60 cents for every dollar made by men; everything from education to health care is more difficult for women to access; and voters in the U.S. are actively wondering whether America is “ready” for a woman president, I’d argue that we need to be reminded what a woman can do. The Angels may have changed over these past 43 years. But the lesson of those opening credits? Not so much.

To a 1970s TV audience raised on the machismo of Columbo, Mannix and Kojak, an action series starring three women — Kate Jackson as Sabrina, the smart one; Farrah Fawcett-Majors as Jill, the sporty one; Jaclyn Smith as Kelly, the classy one — was radical enough that its producers and writers made sure to disguise any hint of a feminist message under a mountain of fluff. (Note: The creative team were all male. Banks is the first female head writer and director in the entire Angels franchise.) I knew the plots were ridiculous: The women’s prison episode, where the Angels were chained together, the motorcycles and karate chops, the alligator wrestling. It was the kind of show where if someone wanted to seem smart, she’d put on glasses. But I also knew I was hungry, and there wasn’t much else to eat.

The promos for the show were outrageously sexist even then. “They’re in it up to their gorgeous private eyes,” read one ad. “The girls who do it for Charlie,” read another. The producers found every excuse to get their actresses into zany costumes — football pads, Robin Hood outfits, Roller Derby uniforms — or better yet, bikinis. There was national rejoicing when they stopped wearing bras. Though the Angels never had sex, there was near-constant, giggly sexual innuendo. Seeing the show today, it’s notable how high and girly, and how unthreatening, their voices were. And their idea of diversity was that one of them was blonde.

But! They had camaraderie. They had in jokes. They had each other’s backs. As Sex and the City fans would feel decades later, every viewer was a Kelly or a Bree or a Jill; everyone had a character who was “them.” And to 14-year-old me, already sick of the false stereotype of women as cat-fighting competitors who would undermine any friendship for a dude, the Angels’ affection for each other fizzed me up like a glass of champagne. They would never steal a boyfriend. They had wiles, but they used them for good. A man didn’t swoop in to save them, they saved each other.

By November, the show was No. 1, receiving 18,000 fan letters a week. Time magazine put the Angels on its cover, tagged “TV’s Superwomen.” Most importantly, the show was earning US$100,000 per advertising minute, the highest rate a series had ever commanded.

Off-screen, Fawcett-Majors was teaching us another lesson. She was the breakout star, with the feathered, blonde hairdo that everyone copied. Her poster, with erect nipples pushing against her red bathing suit, sold seven million copies. She was a sensation.

But she wanted out of Angels. Her then-husband, Lee Majors, was the star of his own action series, The Six Million Dollar Man. He was earning $50,000 a week to her $5,000. He wanted her home at night to cook his dinner. She wanted a movie career. She quit the show, and the producers sued. They settled, but she won. Fawcett-Majors agreed to appear in six episodes as a guest star, at $150,000 per episode, more than she would have made for a whole season. Now that’s role modeling. Go for the money and power.

Fawcett got divorced, by the way. So did Jaclyn Smith, Kate Jackson, and Cheryl Ladd (who replaced Fawcett). Much later, so did Barrymore. “When a young lady is on a show, she doesn’t have the time to give her husband or boyfriend the time that’s necessary,” Aaron Spelling, the show’s co-creator, once said. I’m just going to leave that quote there for you to digest.

The series’ magic fizzled. Feminists and critics derided it as “Jiggle TV.” Jackson departed after season three. Other, hipper series caught up. In June 1981, after 109 episodes, Charlie’s Angels was cancelled. (“Is the Jiggle Up?” People magazine quipped.) But the Angels, like an earthquake, had opened a crack in the cultural landscape.

When Barrymore produced her film in 2000, her emphasis was on girl power, guns and gadgets. Way too many movies concoct elaborate excuses for women to work together — I’m looking at you, all-woman Ghostbusters — but Barrymore didn’t fall into that trap. Her Angels — Barrymore as Dylan; Cameron Diaz as Natalie; Lucy Liu as Alex — were tight from the get-go.

She kept the crazy costumes, like skin-tight, motocross leathers, flouncy St. Pauli Girl dresses, and Diaz did much of her work in bikinis or underpants. But now the costumes served a different purpose: to make fun of guys. They played up the tropes that made ridiculous men helpless. When Liu cracked a riding crop against her leather skirt, or Barrymore unzipped her boiler suit, they were flipping a cheerful birdie to all those sexy nurse Halloween outfits. They were seizing the means of seduction. Unlike their chaste TV predecessors, Barrymore’s Angels had sex, healthy, happy, frequent, consequence-free sex. And they were fiercely loyal to each other.

The plots were still terrible, though: overwrought, overcomplicated, overloud. The villains were women, but they were stale, kittens-with-a-whip. The director, who goes by McG, and all the many writers were men, with one exception. And the Angels’ skills were pure camp. They could hack into any computer, dismantle any security system. When they jumped into the air, they rose 10 metres and hung there, clearly on wires. They leapt out of planes and landed smoothly in moving speedboats; they were blasted by bombs but never bruised a rib.

I think McG, a director of music videos, was recasting the Angels as avatars from a comic book or video game. That’s not necessarily a bad thing: in 2000, comic books and video games were dreadfully sexist, and sorely needed a woman’s point of view. It was certainly successful. The first film was the 12th-highest grosser of 2000, the sequel came in at No. 24 in 2003, and together they raked in $523 million worldwide. But overall, the tone wasn’t “don’t underestimate us,” it was more, “go ahead, underestimate us, we don’t care.”

So what’s changed in the new film? Today’s Angels are more diverse: fledgling Angel Elena is played by Naomi Scott, whose heritage is British and Ugandan, and tough-chick Angel Jane is played by Black British actress Ella Balinska. The film honours the long history of the Angels, as one of the original trio pops up and costumes from the Barrymore films appear. But the current Angels are new to one another. This is their origin story, where we watch them become friends.

They still use sex appeal as an espionage tool, but they’re far less campy about it. The stunts are grittier, the action takes place more in real time, and the stakes feel more authentic. Banks treats the story as a workplace drama, and she carves a meaty role for herself as a former Angel promoted to a Bosley, an overseer. “I wanted a world where they didn’t kick you out when you turn 40,” she told Steven Colbert. Interestingly, the Angels are back to being chaste. They flirt, but they’re busy doing their jobs.

The plot is still nonsense, but it’s a higher order of nonsense, and here’s where the enterprise feels modern. Banks sets her story in the capitals of Europe, which she introduces with cityscape shots stamped with the words London or Istanbul or Paris. She’s clearly staking her claim to the turf occupied by James Bond and Jason Bourne. She pulls off a couple of bravura stunt sequences, too, including one that ends with a car bouncing down a staircase and into a river. Her final montage is littered with power cameos from a league of real-life Angels, including Indy racer Danica Patrick, mixed martial arts expert Ronda Rousey, snowboarder Chloe Kim and gold medal gymnast Aly Raisman.

By the end, the fictional Angels and what they represent have receded, and what’s risen to the fore is the significance of the movie they’re in: the fact that a valuable property with a $48-million budget is at last being guided by a woman, and she’s unabashedly going toe to toe with the big boys. Costner, Gibson and Clooney can direct splashy pics and star in them? Well hell, so can Banks. As in those opening credits from once upon a time, she has recruited, retrained and reframed this perennially underestimated women’s franchise.

Now it works for her.