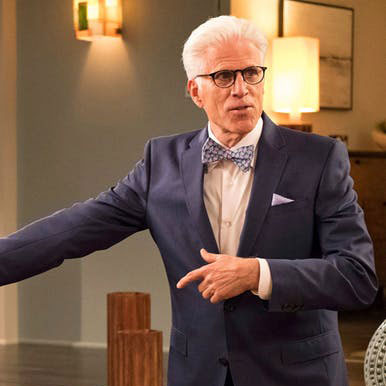 Ted Danson plays Michael, an immortal being known as the "architect" who presides over the afterlife in The Good Place. Photo: Courtesy of NBC

In northern climates, November is bleak. Trees stripped of leaves stand bare against grey skies; the Hanukkah and advent candles that will light up the dark and cold are almost, but not quite, here.

It’s fitting that some Christians historically call November the Month of the Dead. The ancient festival of All Saints falls on Nov. 1 and All Souls on Nov. 2.

In some churches, special books for writing the names of deceased loved ones are kept open for the month. Catholics in particular pray for those souls in transition from death to their “final reward,” a period referred to in past times as purgatory.

The doctrine of purgatory has deep roots in early Christian literature — even though, as University of Utah history professor Isabel Moreira writes, “the scraps of textual ‘evidence’ that undergird the notion fall … drastically short of the concepts they spawned.”

Frozen yogurt in the afterlife

The seventh and eighth centuries saw the growth of teaching about an intermediate place where souls undergo purification and purgation. Moreira asks:

“Why was there suddenly so much interest … in extending a biblical metaphor of spiritual cleansing into a place or stage in the afterlife with defined dimensions, geography, time and inhabitants?”

And frozen yogurt shops, if your doctrine runs to NBC. Enter Eleanor, Tahani, Chidi and Jason. The four are characters in The Good Place, a satirical comedy about an afterlife that’s best described as a mash-up of historic Christian notions of purgatory and French existentialist philosopher Jean-Paul Sartre’s play No Exit.

The Good Place reinforces the ancient hope for a second (or sometimes, 800th) chance, while testing the characters against the kinds of increasingly tricky ethical dilemmas taught in ethics courses.

The series reveals sophisticated research. The writers hired a philosopher, and the episode “The Trolley Problem” not only encapsulates a classic ethical conundrum, it also won a Hugo Award.

The trolley problem asks whether it’s justified to kill one person to save five lives. Imagine being at the controls of a runaway trolley speeding toward five workers unaware of their impending doom. If you could pull a lever to divert the trolley down a different track, resulting in the death of only one previously unthreatened worker, should you?

The conundrum presents the classical tension between deontologists, who say it is never good to kill a person, and utilitarians, who say it is better to sacrifice one life to save five.

The newly dead and their flaws

Two non-humans preside over The Good Place: Michael (Ted Danson), the omniscient architect, and Janet (Darcy Beth Cardon), an endearingly cheery and powerful database who can answer any question and provide the humans with whatever they want.

The four recently deceased humans embody archetypal flaws. Eleanor (Kristen Bell) self-describes as “white trash.” She is smart and selfish, focused on getting what she wants. Chidi (William Jackson Harper) is an obsessive-compulsive moral philosopher who teaches ethics but is incapable of making a decision. Tahani (Jameela Jamil) is a rich and beautiful socialite obsessed with status and the opinions of others. Jason (Manuel Luis Jacinto) is a simple-minded man-child and petty crook whose solution to any complex problem in life was to throw Molotov cocktails and run.

While producer Michael Schur (who was also behind the American version of The Office) cast racially diverse actors — Eleanor is portrayed as a white American, Chidi as Nigerian-born and Senegalese-raised, Tahani as a British South-Asian and Jason as a Filipino-American (the actor is actually Canadian) — the setting of The Good Place is flatly middle-American. An International House of Pancakes serves in season three as one of the dimensional gateways.

Far more nuanced are the philosophical questions that plague the four humans in The Good Place: Do I always have to tell the truth? Is it OK to ignore present action for future gain? What if I participate in evil unknowingly — if so, am I to blame for the outcome? Is it possible for an action to be both good and evil at the same time? If so, how does one decide? Should I sacrifice myself for others?

Even those only casually predisposed to reflecting on our actions might be surprised to see themselves in some of these scenes. But The Good Place presents no easy answers.

Our classes on theology in film focus on what it means to be human in relationship to the transcendent — what’s called “theological anthropology.” Here, the statement by Janet’s character rings true: “The more human I become, the less things make sense.”

Eleanor’s teary words in a recent show rephrase the ancient philosophical question of suffering: “What’s the point of love if it’s just going to disappear? There has to be meaning … Otherwise the universe is just made of pain.”

As the series emphasizes, goodness is not straightforward. What is striking is that in the characters’ attempts to “be good” and “do good,” they are transformed. The Good Place is really about how to live “the good life.” Together, the four do change and grow. They get their second — and 800th — chance. Not only that, they transform the lives of others.

For all its fart jokes and sight gags, The Good Place belongs to a venerable philosophical and theological tradition. Works such as Hieronymus Bosch’s late Middle Ages painting The Garden of Earthly Delights show how artists have always had an easier time — and more fun — portraying hell than heaven.

While the doctrine of purgatory no longer occupies such intense interest among most Christians, apparently the place has had a makeover.

Centuries after Dante (referenced in the The Good Place season three finale), it’s surprising to find the afterlife back, and winning awards as a successful series.

NBC has breathed new life into a question some have wrestled with every November since ancient times: whether there’s hope for the less-than-perfect, that is, for all of us.

This article is republished from The Conversation under a Creative Commons license. For more insightful comment on the news of the day by Canadian academics, go to theconversation.com.