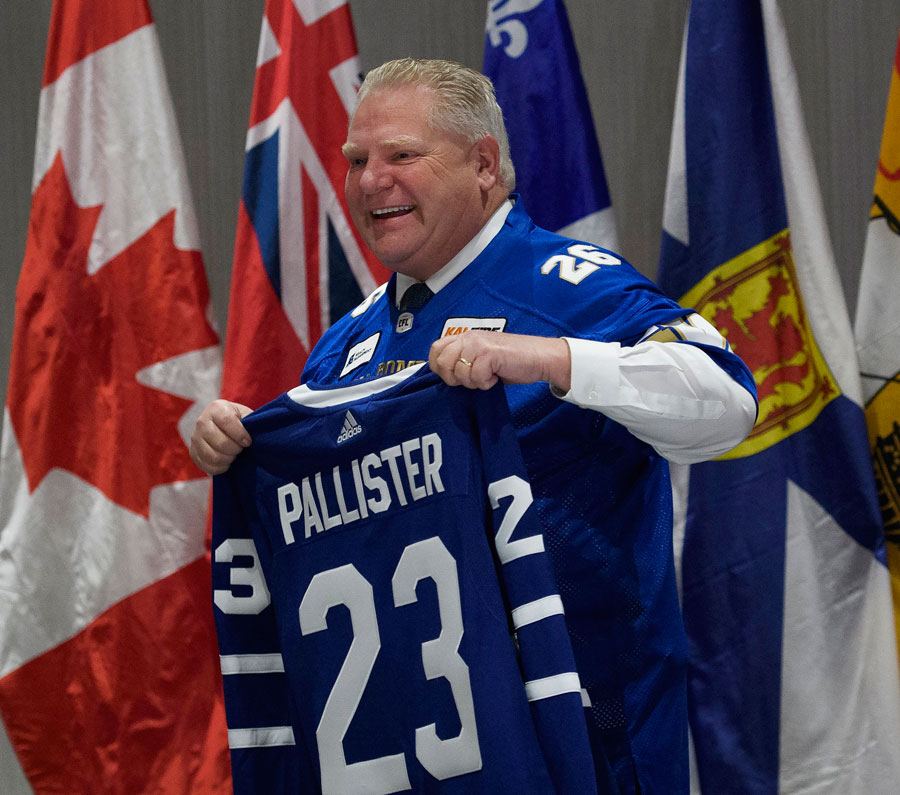 Ontario Premier Doug Ford hands out Toronto Maple Leaf Jerseys to fellow Premiers at a meeting of the Council of the Federation. (Photo: The Canadian Press/Nathan Denette)

“An extraordinary meeting” and a “tremendous moment of solidarity” is how two Canadian provincial leaders are describing the outcome of the premiers’ con-fab in Toronto on Monday.

The Council of the Federation brought together all 13 leaders of Canada’s provinces and territories who gathered to present a unified call to action — including an increase in health spending and the right for provinces to opt out of a federal pharmacare plan — that they will take to Ottawa when they meet with Prime Minister Justin Trudeau early in the new year.

Interestingly, for the first time ever, the premiers are emphasizing the needs of an aging population as an argument to increase health transfers. In a July 11 letter to the Prime Minister, the premiers argued that, “Canada Health Transfer does not factor aging into its payments, and as such, federal transfers are not sufficient to support the additional care needs of Canada’s aging population.”

In the intense one-day meeting, hosted by Ontario Premier Doug Ford, the leaders agreed on four immediate “priority areas” that premiers say the federal government must immediately address include:

Besides building a to-do list for Trudeau, Monday’s meeting was an opportunity for regional leaders to present a unified front and signal they are ready to move on on from the acrimonious bickering that has highlighted federal-provincial relations in recent years.

In the press conference following the meeting, premiers expressed optimism about the prospect of working with the federal government on key issues. “It was an extraordinary meeting. But we’re in extraordinary times,” said B.C. premier John Horgan. “It was a tremendous moment of solidarity,” echoed Jason Kenney, Premier of Alberta.

Whether the premiers’ meeting will be a watershed moment that heralds a new era of thawing relations between Ottawa and the provinces still remains to be seen. But the premiers will have to do more than voice expressions of unity (or trade hockey jerseys) to tackle one of the biggest problems facing the nation today.

That’s because it’s hard to remember a time when relations between federal and provincial leaders have been so badly frayed. Since Trudeau was first elected in 2015, his government has consistently butted heads with premiers over a variety of issues, including the implementation of the federal carbon tax, delays on pipeline expansion and government’s unwillingness to compensate provinces hit hard by declining oil revenues.

And the recent election, which saw a Liberal minority government formed without any support in the Western provinces, suggests that regional divisions have become only more ingrained.

It didn’t help that in the weeks leading up to the October election, Trudeau repeatedly excoriated several premiers — most notably Ontario’s Ford, Alberta’s Kenney and Saskatchewan’s Doug Moe — for making drastic cuts to their province’s spending programs. And the premiers didn’t hesitate to fire back at the Prime Minister, citing his scandals and failed environmental policies as reasons to vote against him. This friction created a log-jam in policy that is hurting the economy and threatening the livelihood of many Canadians.

But if Monday’s meeting is any indication, several of the most combative premiers seem prepared to offer an olive branch to Ottawa. Saskatchewan’s Moe, who chaired the session, resisted his usual urge to take a shot at the federal government, saying that his colleagues are willing to “find ways to work together to achieve shared priorities and address some of the regional concerns in our country.”

And in a further sign of this new found goodwill, Ford, one of the Trudeau government’s most vocal critics, went on a peace offensive before the meeting, saying, “We want to send the message around the world that we’re a united Canada. We’re stronger together and we’ll get over these bumps.”

These normally anti-Trudeau premiers have obviously decided that it makes sense to bury the hatchet and play nice with the Liberals, at least for the time being. In return for this good behaviour, they’re going to to approach Trudeau cap in hand, asking for more money to fund regional program spending.

While this money will be to pay for infrastructure spending and job creation, a major ask will be the 5.2% increase in health transfers, to help address huge issues unfolding in their provinces: including wait times for medical care, increasingly expensive diagnostic equipment, the hiring of more doctors and nurses and an injection of funds into home care services.

CARP’s Chief Advocacy Officer  Marissa Lennox supports the call made by provincial and territorial premiers to increase health care funding. At the same she says that, “if the federal government is going to increase funding, it is critical that we ensure that the funding creates opportunities to drive more innovation, increase efficiency and increase focus on patient-centered care that will lead to a higher performing healthcare system, not just to meet the status quo. It is vitally important to ensure that our healthcare system has adequate resources to meet the many challenges of an aging population, which affects all Canadians.”

However, this annual five per cent increase is not in keeping with the Liberals election platform, which promised a $6 billion increase in spending over the next four years. And when you factor in that the Liberal program includes spending for a pharmacare plan, which is already meeting with provincial antagonism, it’s evident that unless the federal government scales back its drug plan and further loosens the purse strings, the premiers’ action items will fall on deaf ears.