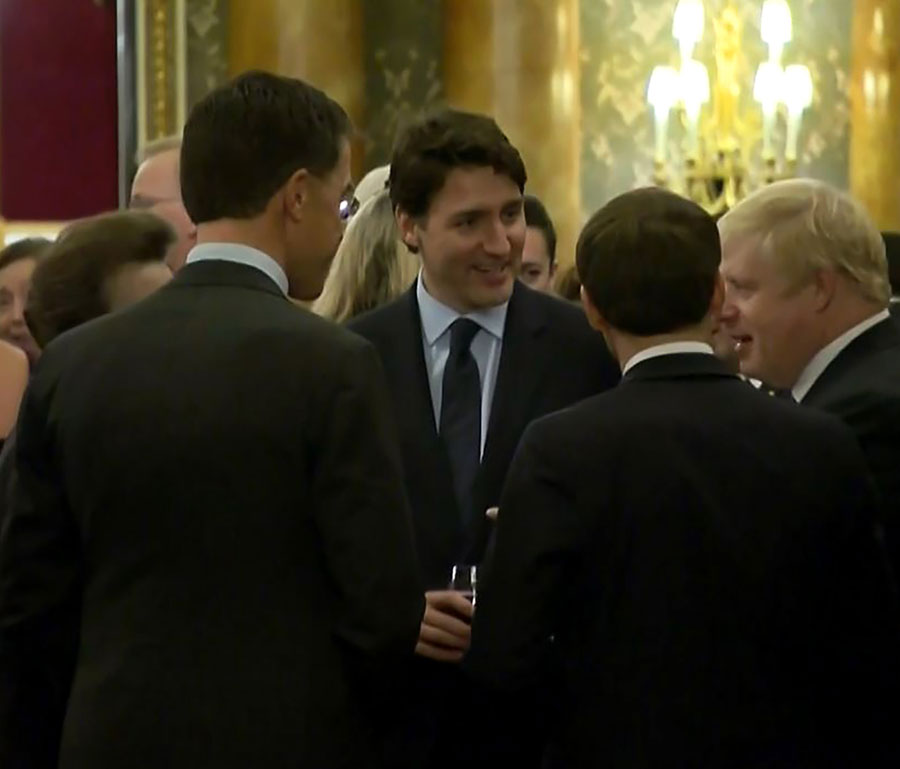 When Prime Minister Justin Trudeau was caught gossiping about U.S. President Donald Trump at the NATO gathering in London, it was made clear that he obviously hasn’t learned a lesson that has  been drilled into politicians since the dawn of radio and television — the cameras are always rolling, and the microphones are always hot.

Last night at a reception in Buckingham Palace following the 70th anniversary meetings of NATO, cameras caught Trudeau yukking it up with English Prime Minister Boris Johnson and French President Emmanuel Macron, taking not-so-veiled shots at the U.S. leader. Princess Anne was also part of the group, but she’s not seen talking or laughing. The Princess Royal had her own memeable moment when the Queen beckoned her to come greet Trump and the First Lady in a receiving line, and Anne was seen on video simply shrugging.

The snippets of conversation, which can barely be heard over the din of the reception, capture Trudeau mocking Trump for making him wait while the President held one of his overly long press conferences. In the recording, Trudeau quips that “(Trump) was late because he takes a 40-minute press conference at the top.” While the rest of the conversation is inaudible, Trudeau then adds, “You just watch his team’s jaws drop to the floor. “

When informed that other world leaders were sharing a laugh at his expense, Trump called Trudeau “two-faced” before taking the PM to task for not honouring his NATO spending commitments. “I find him to be a nice guy, but the truth is I called him out on the fact that he’s not paying two per cent, and I guess he’s not very happy about it.”

Trump, who’s no stranger to live-mic mishaps (remember the “Access Hollywood” video?) recently had other members of his family embarrassed by seemingly off-the-record comments. In June, at a G-20 summit in Japan, his daughter Ivanka came under much derision for her embarrassing attempt to insert herself into a conversation with Trudeau, Macron, then-British Prime Minister Theresa May and IMF head Christine Lagarde.

After the live-mic gaffe, Trudeau tried to walk back the tone of his remarks, saying the jaw-drop comment was regarding Trump’s decision to hold the next G7 meeting at Camp David. “We were all surprised and I think pleased to learn that the next G7  will be at Camp David. I think that was an unscheduled announcement and I think everyone’s team, every one different leader has teams, that every now and then have their jaw drop at unscheduled surprises, like that video for example, ” Trudeau told reporters. He noted that his comments shouldn’t overshadow the “number of good conversations with the President” throughout the conference, which focused primarily on the U.S.-Canada-Mexico free-trade agreement, defence spending and relations with China.

Trump left the NATO meeting earlier than expected, cancelling a  press conference, announcing it in  a tweet.

Trudeau, of course, is not the first politician to to vent  personal feelings or make unguarded personal comment while the cameras and microphones are rolling. Let’s look at some famous examples.

Speaking ahead of an anti-corruption conference in London in 2016, David Cameron is overheard telling the Queen that he’s getting to meet the leaders of Nigeria and Afghanistan, which he called the two most “fantastically corrupt” nations in the world. A scrambling Downing Street spokesperson tried to quell the ensuing tempest by issuing a hurried statement saying, “Both leaders have been invited to the summit because they are driving the fight against corruption in their countries. The U.K. stands shoulder to shoulder with them as they do so.”

In 2012, after a meeting with Russian President Dmitri Medvedev, President Barack Obama was caught by microphones asking Russia to give him space on missile-defence negotiations until after the upcoming election. “This is my last election,” Obama is heard saying. “After my election, I have more flexibility.” The incident provoked much criticism among Republican politicians, who claimed that not only was the president taking for granted that he would win the 2012 election but he was also asking a foreign leader to lay off for a bit until he was back in office. Medvedev promises he will transmit “this information to Vladimir (Putin).” At the time, Republican presidential challenger Newt Gingrich wondered, “How many other countries has the president promised that he’d have a lot more flexibility the morning he doesn’t have to answer to the American people?” The White House tried to nuance the president’s remarks, claiming that Obama was simply noting, “Since 2012 is an election year in both countries … it is clearly not a year in which we are going to achieve a breakthrough.”

In November 2011, Obama was again victimized by a live microphone, this time during what he thought was a private exchange with French president Nicolas Sarkozy at a G20 summit in France. Microphones picked up the two leaders dissing Israeli Prime Minister Benjamin Netanyahu.”I cannot stand him. He’s a liar,” Sarkozy tells Obama. The U.S. president, who always had a rocky relationship with the Israeli leader, responds: “You’re fed up with him? I have to deal with him every day.” After the incident, Sarkozy adopted the always sketchy defence that his comments “were taken out of context” while the White House, sensing that discretion was the better part of valour, wisely chose to offer a “no comment.”

“That was a very bigoted woman.”

U.K. Prime Minister Gordon Brown’s election campaign got off to a rocky start in 2010 when the Labour leader encountered a feisty heckler during a campaign stop. After being berated by the woman, Brown drove off with an aide in his Jaguar but forgot to turn off his mic. The result was a recording of a dispirited Brown describing the event as a “disaster” before calling the heckler a “very bigoted woman.” After the British press made mincemeat of Brown, the leader tried to make heartfelt amends: “I am mortified by what has happened … and she has accepted my apology.”

During a stop in his 2000 election campaign, George W. Bush held an upbeat rally filled with cheers and shouts of support. All seemed well until the event ended, and Bush spotted a journalist he obviously didn’t like. Turning to running-mate Dick Cheney, the future president said, “There’s Adam Clymer – major league asshole – from the New York Times.” To which Cheney replied: “Yeah, big time.” When the media got hold of the live mic gaffe, Bush responded with a non-apology apology: “I regret everybody heard what I said.”

“We begin bombing in five minutes”

In 1984, with Cold War tensions still simmering between the U.S. and Russia, U.S. President Ronald Reagan was preparing for his radio broadcast. Obviously in in a joking mood during audio tests, Reagan famously spoke into the mic: “My fellow Americans, I’m pleased to tell you today that I’ve signed legislation that will outlaw Russia forever. We begin bombing in five minutes.” When the moment was made public, it created a media firestorm, with one European daily calling him an, “an irresponsible old man” while the Soviet state-run news agency Tass described it as, “a very vivid reflection of the convictions of the United States President.”