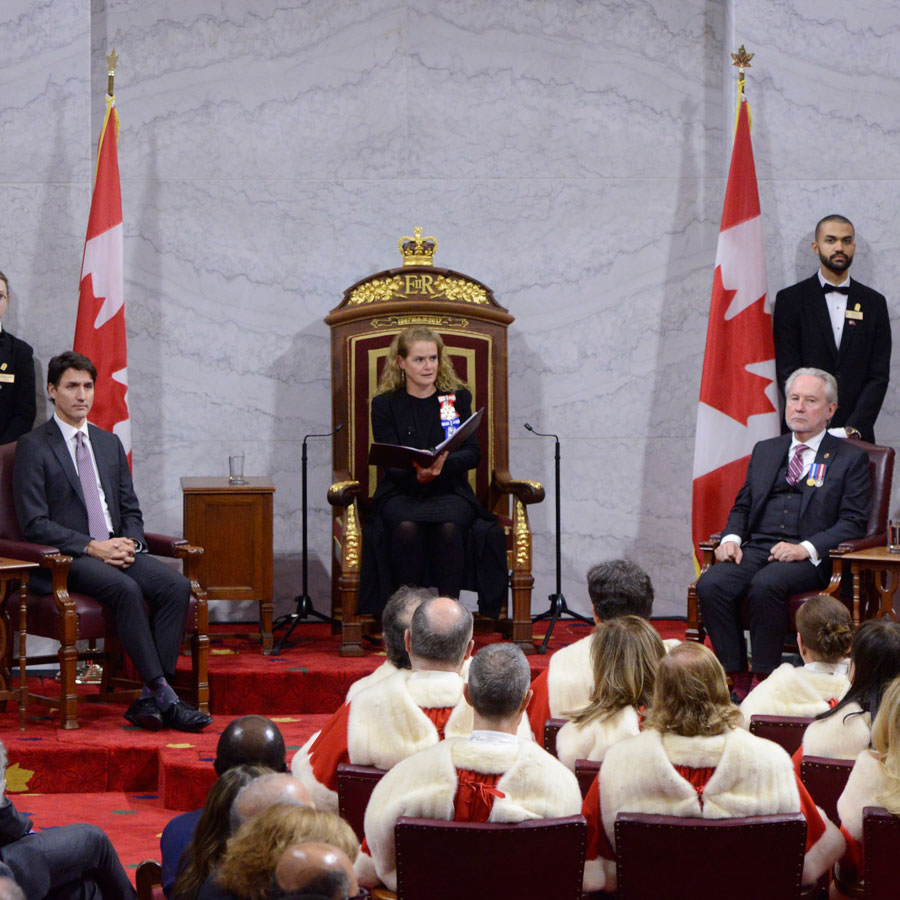 In Thursday’s speech from the throne, Prime Minister Justin Trudeau officially opened the 43rd Parliament and set out his government’s agenda for the upcoming session.

Trudeau’s speech — almost twice as long as 2015 —  not only set the tone under which this minority government will operate but also gave a generalized game plan of policy goals and how they will be achieved.

Giving a nod to the fractured and regional makeup of this Parliament, Trudeau’s overarching theme was that all parties need to collaborate for the good of Canadians. “We differ in many ways but we move forward as if we were one people,” said Governor General Julie Payette as she read the speech prepared by Trudeau and his advisers. However, Trudeau wrote, “I am convinced that anyone can rise to any occasion if they are willing to work with others, to reach a higher goal and to do what is right for the common good.”

For all the talk about collaboration, Trudeau revealed a progressive agenda, which was in no way aimed at healing anger or alienation in the West but was instead a transparent attempt to appeal directly to NDP and Bloc Quebecois, whose support his government needs.

That’s why Trudeau chose to make climate change the centrepiece of his agenda and highlighted Indigenous rights, gun control and pharmacare. There was little or no mention of the hard-hit provinces that comprise the energy sector (Alberta or Saskatchewan) or any proposals of legislation to remedy their situation. Of particular note, he did not mention “oil” or “pipelines” once — unless you interpret “bringing resources to market” as meaning pipeline expansion.

Unlike many throne speeches which dwell in generalities, Trudeau’s was very specific, and he described clear agendas for the following areas:

Budget: Middle and lower class will get a tax cut as early as next week; increased investment in affordable housing; cutting cell and wireless bills by 25 per cent;  increasing the federal minimum wage.

Seniors: There was very little mention beyond a vague reference to “strengthening of pensions.”

Climate change: The carbon tax will remain; it will be easier to buy zero-emission cars; energy-efficient homes will be more affordable; renewed election promise to plant two billion trees.

Behind all the pomp and circumstance that  goes into such a ceremony (to get a taste, watch the first recorded Throne Speech in 1949), the unspoken aim today was to show voters how the Liberals’ minority government plans to win a majority in the next election.

For the opposition Conservatives, it gave embattled leader Andrew Scheer a chance to change the channel away from a growing revolt within his own party and direct it toward the Liberals’ policies.

“We are very disappointed in the throne speech. There’s nothing in it preparing Canada for an economic downturn,” he said in a press conference following the speech. “And there’s nothing on national unity. It was an insult to the energy workers of Alberta and Saskatchewan.” Scheer says that his party will be proposing an amendment to the throne speech, which will be voted on tomorrow.

Bloc Quebecois Yves-François Blanchet indicated that he wouldn’t vote against the speech simply because there was no mention of oil or pipeline.

And NDP leader Jagmeet Singh expressed disappointment in the government’s direction as well, tweeting that the talk was “full of empty promises and little action.” He did note, however, that if the Liberals “show they’re willing to take real actions, we’re ready to work with them to deliver the help Canadians need.”

The House of Commons will vote on Scheer’s amendment, likely necessitating a vote on the speech. While surviving a vote of non-confidence is all but guaranteed — the Liberals have enough support from NDP and BQ, and there’s very little appetite to force another election right now — it’s always a hurdle that minority government must surpass.

Earlier in the day, Liberal MP Anthony Rota was elected the new Speaker of the House. Rota beat out four other candidates, including the Speaker from the last session, Geoff Regan.

The House will likely meet for a few weeks before the Christmas break and will then reconvene to get down to serious business in late January 2020.