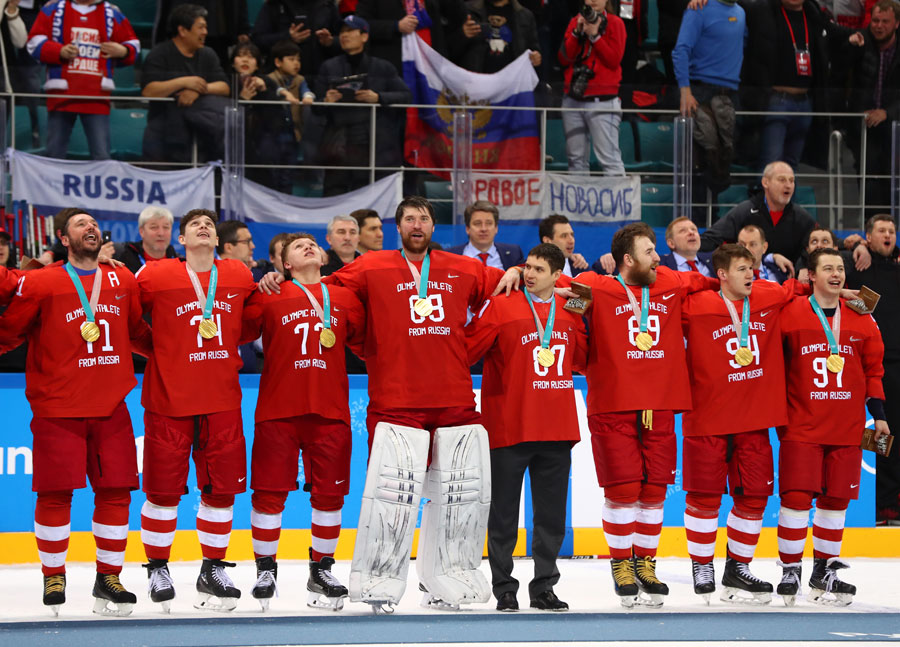 Unable to officially represent their country due to its ban from the 2018 Winter Olympics, the Russian Hockey team celebrates their olympic gold medal wearing the "Olympic Athlete From Russia" jersey. Photo: Daniel Karmann/picture alliance/Getty Images

When the 2020 Summer Olympics in Tokyo opens on July 24 with the usual pomp, once again Russian athletes will be stripped of their flag and anthem after the World Anti-Doping Agency (WADA) banned the country from all sporting events for the next four years.

That means only athletes who haven’t used performance-enhancing drugs can compete; everyone else is banned not only from Tokyo but from the 2022 FIFA World Cup in Qatar and the 2022 Winter Olympics and Paralympics  in Beijing.

No one knows how many athletes will be barred from competing in Tokyo, but after WADA recommended a blanket ban on Russian athletes at the 2016 Olympics Games in Rio, 271 were cleared for competition, bringing home 56 medals, compared to top-performing Team USA, whose 210 athletes won 121 medals.

And after a similar ban on Russia for the 2018 Winter Olympic Games in South Korea, 169 competed as “neutrals,” winning 17 medals compared to Norway’s 109 athletes, who won the most with 39.

As a government official, President Vladamir Putin is not invited nor are any of the members of the Russian Olympic Committee.

Russian athletes who prove they are clean will be able to compete but will do so under the neutral Olympic flag as Athletes from Russia. And if one of these neutral athletes win gold, the Russian anthem will not be played, and the flag will not be flown during the medal presentations.

The World Anti-Doping Agency ruling is yet another stinging indictment of Russia’s shabby record for allowing its athletes unlimited access to performance-enhancing drugs. “Russia was afforded every opportunity to get its house in order and rejoin the global anti-doping community for the good of its athletes and of the integrity of sport, but it chose instead to continue in its stance of deception and denial,” WADA president Sir Craig Reedie said Monday.

Reedie’s sentiments were echoed by the International Paralympic Committee. “This sincere lack of respect towards the rest of the global sporting movement is not welcome and has zero place in the world of sport. It is only right that those responsible for this data manipulation are punished.”

After the 2014 Olympics in Sochi, the country was accused of setting up a massive state-sponsored doping scheme that provided athletes with performance-enhancing drugs and then manipulated lab tests to hide the results.

After evidence of the scheme came to light, Russian athletes were prohibited from participating under their flag in the 2018 Winter Olympics in Pyeongchang. That ban was lifted after Russia vowed to abide by doping regulations, but it has been re-imposed  because the country has once again fallen afoul of WADA standards.

Anti-doping agencies around the world backed the decision to sanction Russia again. WADA’s athlete committee said, “Until these critical abuses of integrity in sport are confronted with courage and a resolute commitment to protect athletes and clean sport, they will continue, and the sports we love remain tarnished.”

Some feel the World Anti-Doping Agency has been too soft on Russia, including WADA’s own vice-president, Linda Helleland.

Russian Prime Minister Dmitry Medvedev acknowledged that doping problems exist in Russian sports but said that the four-year ban was too much, blaming it on “chronic anti-Russian hysteria.”

“It is obvious that significant doping problems still exist in Russia, I mean our sporting community,” he said. “This is impossible to deny.

“But on the other hand the fact that all these decisions are repeated, often affecting athletes who have already been punished in one way or another, not to mention some other points — of course, this makes one think that this is part of anti-Russian hysteria, which has become chronic.”

The Russia Anti-Doping Agency has 21 days to appeal the ban to the Court Arbitration for Sport, which has the final word.

6 Things to Watch For as the Pyeongchang Olympics Begin

Ben Johnson: Where Is He Now?