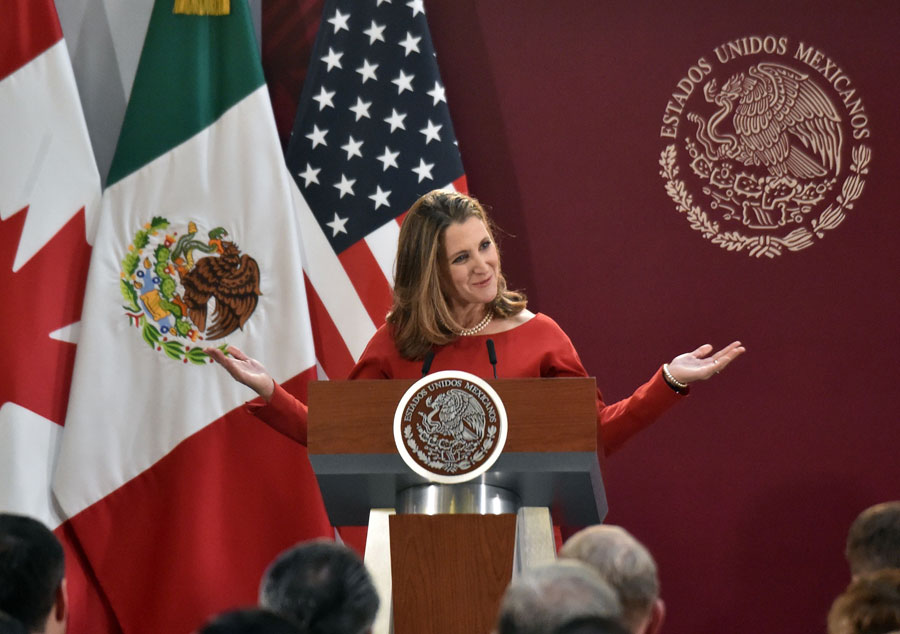 After years of long, frustrating and often contentious negotiations between Canada, the U.S. and Mexico, representatives from the three countries finally signed off on a new North American free-trade agreement, officially known as the U.S.-Mexico-Canada-Agreement (USMCA).

U.S. House Speaker Nancy Pelosi announced the deal, which she praised as “infinitely better” than what the Trump administration first proposed, at a press conference Tuesday in Washington, just moments after House Democrats outlined two articles of impeachment against the President.

Although approving USMCA appears to hand President Donald Trump a major victory given that it was one of his key campaign promises, Pelosi made it clear the amended free-trade agreement got House approval because Democrats managed to negotiate provisions to protect U.S. labour, pharmaceuticals and the environment. A savvy politician,  Pelosi has protected her moderate caucus, who can point to the trade deal as evidence they are not distracted from government business by a partisan impeachment process. Meanwhile, Trump can also use the USCMA to boost his reelection prospects.

Pelosi said it was just “coincidence” that the articles of impeachment and the USMCA agreement were announced  the same day. “As we get to the end of a session, there have to be some decisions made. The timetable for impeachment is the timetable for the committees, and that came to an end with the hearing yesterday.”

Democratic chairman of the House judiciary committee, Jerry Nadler, outlined the reasons for the impeachment, accusing Trump of corrupting the election process and endangering national security by asking the Ukraine to investigate his political rivals, and then ordering officials to ignore subpoenas from Congress to be questioned about the affair.

Trump, for his part, took the opportunity to praise the replacement for the North American Free-Trade Agreement (NAFTA) on Twitter while slamming the original, which Pelosi supported in 1994.

“It will be the best and most important trade deal ever made by the USA. Good for everybody – Farmers, Manufacturers, Energy, Unions – tremendous support. Importantly, we will finally end our Country’s worst Trade Deal, NAFTA!” Trump tweeted at 9:32 a.m. Just 22 minutes later, referring to the impeachment, he tweeted: “Nadler just said that I ‘pressured Ukraine to interfere in our 2020 Election.’ Ridiculous, and he knows that is not true. Both the President & Foreign Minister of Ukraine said, many times, that there ‘WAS NO PRESSURE.’ Nadler and the Dems know this, but refuse to acknowledge!”

Trump closed the thread with his familiar two-word defence:

While the U.S. continues its internecine war, Deputy Prime Minister Chrystia Freeland was in Mexico City for the official signing of the updated USMCA text along with Mexican President Andres Manuel Lopez Obrador and U.S. Trade Representative Robert Lighthizer.

“Today Canada, the United States and Mexico have agreed to improvements of the new NAFTA that strengthen state-to-state dispute settlement, labour protection, environmental protection, intellectual property, the automotive rules of origin, and will help to keep the most advanced medicines affordable for Canadians,” said Freeland.

The negotiation of a new NAFTA began in earnest after the 2016 election of Trump, who repeatedly referred to it as “worst trade deal ever made”  and made it known that he wanted to rip it up. Throughout the process, Trump intruded on the negotiations, first threatening — then imposing — tariffs on Canadian steel and aluminium until Canada negotiated a deal that was “fair to our workers and to the American people.”  Canada, however, refused to back down and retaliated with tariffs of its own until, as Prime Minister Justin Trudeau said, “common sense will prevail.” Canada lifted its countermeasures on  May 20 after the U.S. announced it would eliminate its tariffs.

After much tense back and forth, an initial version of the new USMCA deal, which replaced NAFTA, was finally hammered out by the three nations in November 2018. However, the U.S. House of Congress held it up for months, refusing to ratify it until the sections addressing workers’ rights, the environment and prescription drug prices were revised. The wording was changed and, by Tuesday, Pelosi finally signed off on the deal.

Freeland, who as Minister of Foreign Affairs quarterbacked the trade deal from its infancy to its gruelling conclusion, joked at the Mexico City press conference that the process was an “existential challenge for our country and at times an existential drama.” Just last week the matter seemed to hang in the balance after a video of Prime Minister Justin Trudeau mean-girling Trump at NATO celebrations in London went viral and was used in former Vice President Joe Biden’s presidential campaign ad to show Trump was a laughingstock on the world stage. Tory leader Andrew Scheer led the chorus of Canadian critics who thought the famously thin-skinned Trump would scuttle the deal in retaliation. Freeland admitted she had conversations with Lighthizer about the issue, but wouldn’t reveal what was said.

Lighthizer, who often expressed frustration with Freeland during negotiations, described the new USMCA as “the best trade agreement in history,” acknowledging its finalization as “nothing short of a miracle.”

In order to implement the USMCA, it must be approved by all three countries, which is expected to happen in 2020.