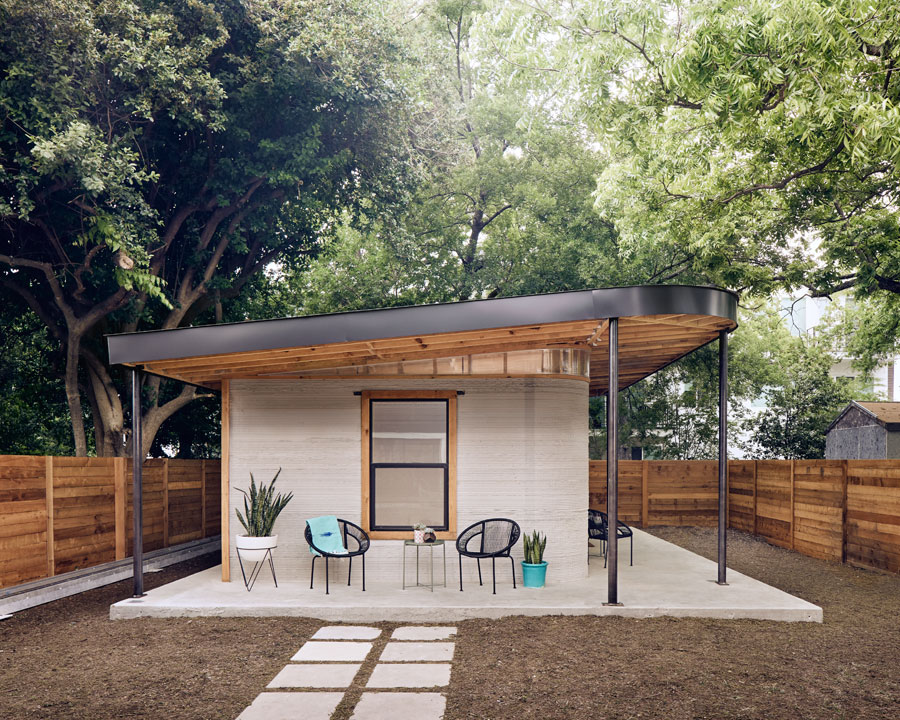 The first permitted 3D-printed home in the U.S. was built by ICON in Austin, TX. in 2018. Photo: Courtesy of ICON

The cost of buying a new home has become so out-of-reach for many Canadians that something has to change soon or a whole generation will miss out on the benefits of home ownership.

“In Canada, the most commonly understood path to secure retirement is home ownership. That dream has been removed from almost half the population of Canada due to the cost of entry,” says Ed Macnab, a 65-year-old Calgarian who thinks he has a hi-tech solution to this chronic problem.

Macnab, a veteran of the IT start-up world, is passionate that this technology will provide an answer to this highly challenging housing problem. He’s backing an innovative new machine that “prints” new homes.

“It seems like a crazy idea until you get an explanation of the technology behind it,” says Macnab, director of business operations for the 3D Printed Homes Corporation (3DPHC).

You may be familiar with current 3-D print technology, which works like a typical printer on steroids. Instead of using ink, 3-D printers typically output layers and layers of melted plastic through a nozzle until you get the result you programmed it for, say, a coffee cup or Baby Yoda figurine.

“A while ago, smart people started asking: ‘What if you make the printer really, really big and what if, instead of melting plastic out of the nozzle, you forced quick-set concrete through it?’” says Macnab.

Print your own granny flat?

Taken to its logical conclusion, the technology could be used to print larger structures — like a granny flat in the backyard, a cottage and a single-family dwelling. Even an office building.

This isn’t just a pie-in-the-sky dream. People in the U.S., Netherlands and Latin America are already living in concrete-printed housing. In Dubai, a space-age looking modular office building (appropriately dubbed the Office of the Future) was printed in 2016. Now fully occupied, the finished structure — six metres high and 36 metres in length — was finished in just 17 days for US$140,000, about half of what it would cost to build it by traditional methods.

Using a 3-D machine (which actually resembles an old-fashioned bulldozer with a robotic arm attached to it more than it does an office printer) the specs are loaded into the computer and the machine begins pouring concrete, or printing. When complete the new home is an almost completely finished form. All you have to do is add electrical, plumbing, kitchen cabinets and put a roof on it. This eliminates the cost and time for exterior siding.

Using environmentally sustainable materials and clever design, costs are minimized by the fact that there is no need for insulation, vapour barrier, drywall, etc. All told, a new home usually takes nine months to a year to finalize, often more. “We’ll be able to build a new home from the ground to the roof in 24 to 48 hours,” says Macnab. “That’s unheard of in the construction industry.”

30 per cent cheaper than traditional homes

Further savings will be realized by eliminating labour costs that comprise a chunk of the cost of a new home. If his company ever gets off the ground and prints the first homes in Canada, Macnab is convinced it will help alleviate the national housing crisis.

There’s still a ways to go before 3DPHC starts printing out its first homes in Canada. Macnab first has to convince prospective home-buyers that concrete homes are the way to go.  With their rounded corners and quirky design features, his homes might stand out in a neighbourhood dominated by traditional bricks-and-mortar residences,

Right now, his company is trying to raise capital to buy a printer (which goes in the neighbourhood of $350,000) from a Dutch outfit. His team is also working on developing a concrete-like structure that is more eco-friendly than the traditionally used Portland cement (which Macnab says has an “atrocious carbon footprint”) but can withstand the rigours of a Canadian winter.

Once this product is approved, they’ll have to show it meets all the various federal, provincial and municipal building codes. “In Canada, we have been building concrete, cinder-block buildings,” he says, confident he won’t run into any bureaucratic roadblocks. “This is fundamentally equivalent to those construction methods.”

“If Jupiter aligns with Mars, we could be ready by the end of 2020,” he jokes. When the business is up and running, Macnab sees printed homes as a solution to more than providing entry-level homes. He envisions the cost-saving technology being applied to solve other areas underserved by affordable living, such as housing for the homeless, veterans, First Nations reserves, those who live in the North as well as retirement communities and long-term care facilities.

“This technology will reduce the cost of housing for a significant portion of Canadian society,” Macnab says. “We’re going to shake up the building industry.”

Tiny Homes: How Seniors Are Benefiting From the Minimalistic Housing Trend