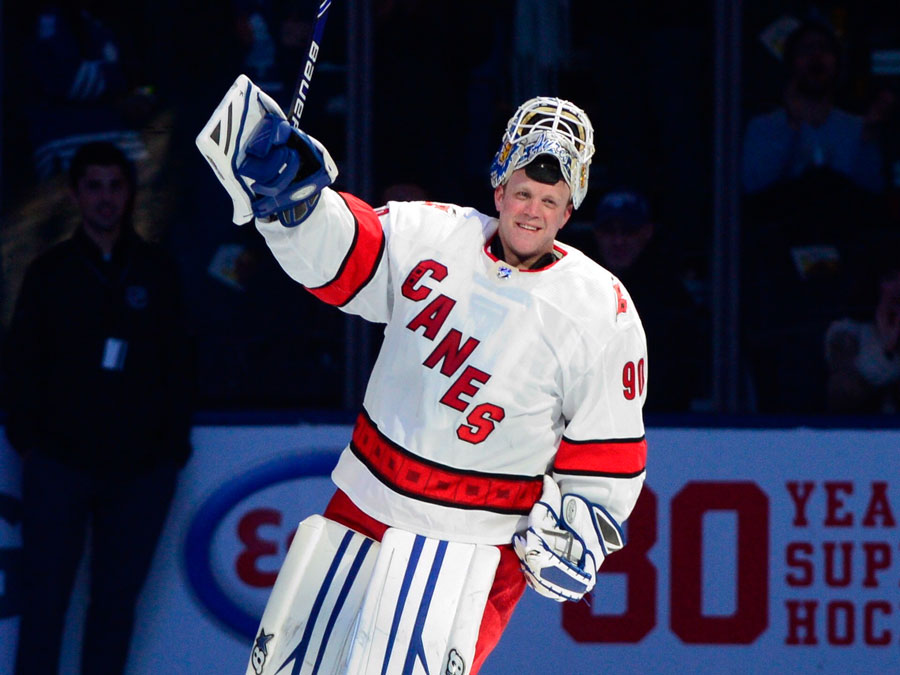 David Ayres skates a victory lap after becoming an unlikely hero in the Carolina Hurricane's 6-3 victory over the Toronto Maple Leafs. Photo: The Canadian Press/Frank Gun

It’s going to be hard for David Ayres to wake up from the fairy-tale life he’s been living since Saturday night, when he skated out to play goal for the Carolina Hurricanes and beat the Toronto Maple Leafs.

Ayres, a 42-year-old Whitby, Ont., native, became an overnight phenomenon when an extraordinary series of events thrust him into a real live hockey game. Here was a regular good guy — a Canadian Everyman — living out the dreams of millions by playing out on the greatest stage of all, Hockey Night in Canada.

An immediate social media sensation, Ayres’ starring role is destined to become folklore to the countless road-hockey stars, house-league grinders and Friday-night beer league legends who yearned but never got the chance to play pro hockey. Deep down, they knew they weren’t good enough to cut it. But they always clung to the dream; give them that one chance to get out there and prove themselves, to hear the cheers of the crowd and …

As everyone who has laced up the skates knows, the odds against this are just too astronomical. Fairy tales like this one simply don’t happen. Least of all to 40-something beer-league goalies who couldn’t even make it in Junior B.

Ayres, of all people, realized this. Probably somewhere in his late teens, he had accepted the fact that a pro-hockey career wasn’t in the offing. So he moved on, got married, had three kids and settled down to the realities of normal everyday life.

And after his kidneys began breaking down in his mid-20s, and he received a life-giving transplant donation from his mother, recovering his health replaced hockey as his No. 1 concern.

But his passion for hockey never faded away. He kept his skills sharp by playing Friday night men’s leagues. He coached youth hockey in Whitby and, through sheer luck and persistence, landed a coveted job serving as the Leafs practice goalie, where he would basically serve as a moving target for Leafs honing their shots. The building operations manager at Ryerson University’s  Mattamy Athletic Centre  – located on the site of the old Maple Leaf Gardens – drives the Zamboni there.

Not a bad gig for a hockey lifer.

But on Saturday night, the Zamboni-driving kidney-transplant recipient and father of three was suddenly given the chance to live out his long-extinguished fantasy.

The Hurricane’s starting goalie James Reimer was pulled in the first period after hurting his leg in a collision. Back-up goalie Petr Mrazek came into the game, and Ayres got the call to put on the goalie gear as the third-string emergency replacement.

That’s when the unthinkable happened, and the fairy tale started unfolding. Halfway through the second period, Mrazek wandered out of his net to chase a loose puck. While doing so, he was blindsided by Leaf forward Kyle Clifford, which ended Mrazek’s night and meant that the Canes would have to go with the designated emergency goalie.

Enter David Ayres. Wearing a borrowed mask, a mismatched pair of hockey pants and a nervous grin, the hilariously awkward-looking goaltender skated slowly to his net as Canes players tapped his pads and fans cheered. Would he even be able to even stand up on the ice? Could he make one save? Would he get seriously hurt trying to block a 100-mph shot?

The WTF look that crosses Canes’ coach Rob Brind’Amour as he watched his new netminder enter the arena was priceless. Brind’Amour wasn’t encouraged when Ayres first skated to the wrong net or when he let in two quick goals. Uggh, this was going to be an embarrassing low point for a team struggling to make the playoffs.

But then something magical happened. The Canes players rallied around their new goalie and played as if it was Game 7 of the Stanley Cup Finals. They furiously fore-checked the Leafs, pinning them in their own zone and choked down on defence, allowing the Leafs only 10 shots in 30 minutes of play, many of them from long range.

“The guys told me to have fun with it,” said Ayres after the game. “Don’t worry about how many goals go in. Just enjoy it and said this is your moment.”

With his new teammates playing their hearts out and Ayres settling into the game, the fans started sensing the enormity of the event. They cheered every save and urged Ayres on even though he was playing against their hometown heroes. “The fans were so awesome,” he said later. “Every time I made a save, I could hear them cheering for me.”

After the game, his wife, Sarah, was as choked up as everyone watching. Her tweet basically said it all.

When Ayres snagged the puck as the buzzer sounded, the Canes mobbed him on the ice. He became the first third-string goalie to register a win in the NHL. As he walked into the dressing room after the game, his new teammates showered him with water, chanting his name as they would for a regular teammate. After the game, the Hockey Hall of Fame called: they wanted his stick for a display.

In less than two periods of play, David Ayres had gone from a completely anonymous Zamboni driver to First Star on a Saturday night and overnight celebrity.

Today, he’s in New York doing the talk-show circuit usually reserved for the big stars of the game. Tomorrow, he’ll fly down to Raleigh, N.C., to get the royal treatment, including a meeting with Gov. Roy Cooper who has promised to make him an honorary citizen.

When the interviews end and his 15 seconds of fame are up, David Ayres will go back to driving a Zamboni, coaching kids’ hockey and being a regular guy.

But long after the fuss dies down, he’ll always cherish the memories of that one magical Saturday night in Toronto when he fulfilled his dreams, heard the cheers and shut down the Toronto Maple Leafs.

That, my friends, is one hell of a story to tell the grandkids.