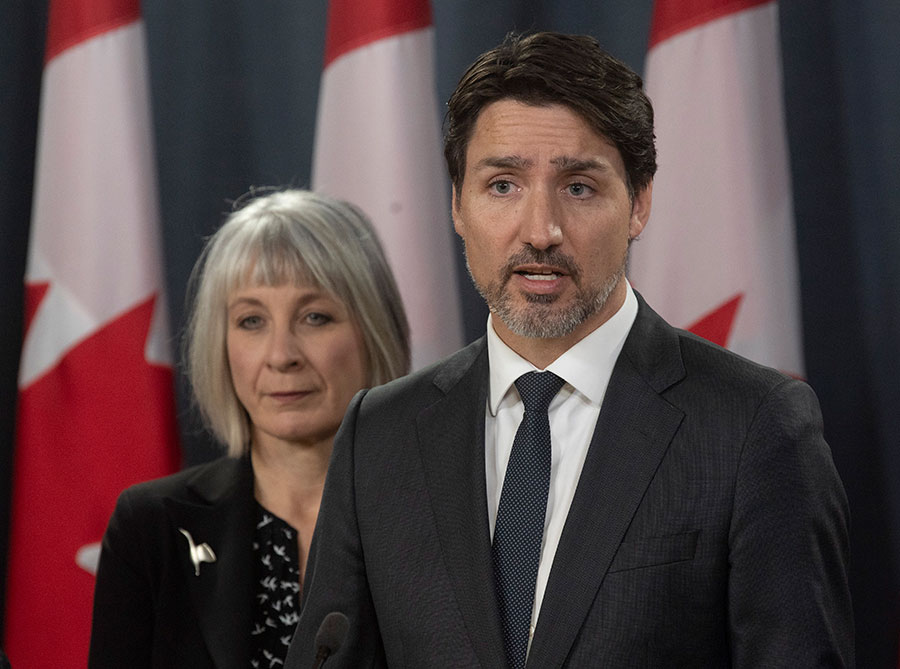 At a press conference in Ottawa, Prime Minister Justin Trudeau, along with Health Minister Patty Hajdu, announce an emergency government package to help provinces with the cost of fighting COVID-19. Photo: The Canadian Press/Adrian Wyld

Prime Minister Justin Trudeau today announced that his government is “pulling out all the stops” to help fight the spread of COVID-19 and provide economic relief to individuals and businesses affected by it.

In a press conference today, the prime minister announced a $1 billion package of emergency funding to help provinces and territories pay for  health-care costs of treating patients who contract COVID-19 as well as measures that will assist workers who are forced to stay at home from work and self-isolate.

Assuring Canadians that the government is on top of this rapidly spreading illness, which is particularly dangerous for the elderly and those with underlying health conditions, Trudeau urged everyone to be cautious and calm and join the effort in fighting the disease. “Our government is there for you,” assured the prime minister. “We can support you. And we will.”

While there are fewer than 100 cases of COVID-19 in Canada, the government is making every effort to contain the spread of the disease to avoid mass infection rates.

The press conference took place minutes before the World Health Organization finally declared COVID-19 to be a pandemic.

“This is a serious situation. Canadians need to be aware what they can do to protect their families and neighbours. We all have a role to play,” said Trudeau, joined at the press conference by Health Minister Patty Hajdu, Finance Minister Bill Morneau and Canada’s Chief Public Health Officer Theresa Tam.

The prime minister said that the emergency government measures are necessary to “support workers and businesses as they face challenges of coronavirus and its impact on the economy. We know that Canada is in a good position both fiscally and with a strong health system.”

Of the $1 billion emergency fund, $500 million will go to provinces and territories for health system needs and containment efforts, $200 million will go for masks and protective shields and increased public education, and $275 million for research and vaccine studies that, according to Health Minister Hajdu, will “amplify our ability to contain the illness and develop a vaccine that’s effective.” As well, $50 million of this emergency fund will be made available to help poorer countries prepare for the virus.

As well, Trudeau announced that the government will support workers who are forced to take time off work and self-isolate by waiving the one-week waiting period to begin receiving Employment Insurance (EI). “Let me be clear: no one should have to worry about their job if they have to be quarantined. No employer should feel like they have to lay off a worker because of the virus,” said Trudeau. To help small businesses that may face a cash shortage because of COVID-19 effect on sales, the prime minister promised that easily accessible credit will be available to help them remain in operation until the scare passes.

The fiscal costs of fighting the disease will no doubt be massive. The prime minister said he is aware of this and has spoken to airlines and business leaders to get a better idea of the potential impacts on the economy. Morneau added that he’s in daily contact with Canadian banks and that, right now, “they are not seeing any challenges around credit.” However, should the situation change, he promised that the government “stands prepared with multiple measures.”

Although the billion-dollar package will provide immediate relief, it pales in comparison to elsewhere around the world. Japan, for example, has committed $14 billion in two separate funds to buttress health care and support businesses affected by the illness, and Britain recently announced its own $6.5 billion emergency package. While Trudeau deflected comparisons between the dollar amounts, he also echoed Morneau’s promise that, should the situation worsen, “We are ready to do more.”

Responding to another question about the likelihood of Canada following Italy’s lead and closing its borders, Trudeau said, “We have prepared for a wide range of scenarios. But I’m confident we’re very far from arriving at that point.” However, he didn’t completely rule out the possibility out, noting, “We will continue to make decisions based on how the situation evolves.”

Trudeau, Hajdu and Tam also reiterated the need for all Canadians — individuals and businesses — to do their part to “flatten the curve” of the spread of COVID-19. “Everyone can change the dynamic of the curve,” said Tam. “Everyone has to contribute.”

The prime minister admitted to one reporter that he has not had a screening test despite the fact that two members of his party – Montreal MP Anthony Housefather and Minister of Natural Resources Seamus O’Regan – are both currently in self-isolation.

However, Trudeau assured everyone that he was closely following all of Dr. Tam’s recommendations and would continue to do so.

And he urged all Canadians to do the same.

“We all have a role to play. There are risks, but those risks can be minimized,” said Trudeau, advising Canadians to follow public health recommendations such as “shaking fewer hands, washing your hands more often, coughing into your elbow and staying at home and self-isolate.”