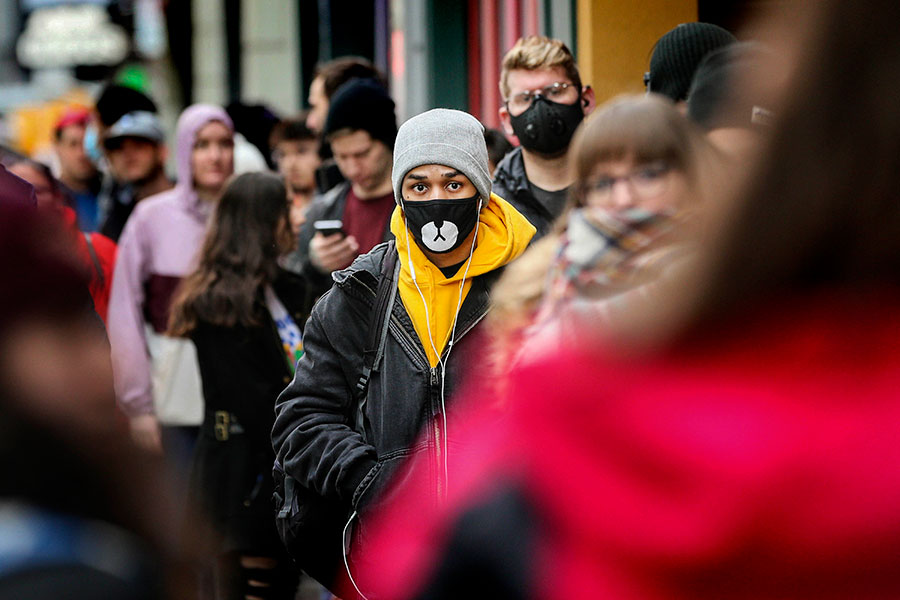 Young gamers in Toronto line up to buy the latest release, despite requests to self-isolate and stay home. Photo: Andrew Francis Wallace/Toronto Star via Getty Images

A month ago, if we asked older Canadians what they felt about allowing our government leaders to place severe restrictions on our ability to travel, work, shop, dine out or gather in public, most would have either laughed it off as a bad joke or kindly suggested we get our heads examined.

But in this deeply bizarre COVID-19 world – where every province has invoked emergency acts to close borders, shut down economies, shutter businesses and severely restrict and monitor our movements – the vast majority now think those who don’t abide by these new rules should be fined or even face criminal charges.

This sentiment is especially strong among older Canadians. In this poll, which ran on our Facebook page, an overwhelming 96 per cent of respondents are in favour of the COVID-19 emergency measures and of fining and pressing criminal charges against businesses and individuals – now known as “covidiots” – who defy them.

Yes, Facebook polls are admittedly unscientific. But the one-sided nature of our poll (which drew over 2,000 respondents) is ample evidence that the vast majority of our followers agree with politicians who say they must use all the “measures in the tool box” to make sure recalcitrant covidiots obey the new rules.

The comments on our poll were varied but most were along the same lines of one reader, who posted: “If no one is following the rules, then something has to be done.” One even suggested that police put violators under “house arrest” and force them to wear an “ankle bracelet” – and nobody disagreed!

So it’s no wonder that last Wednesday, when Deputy Prime Minister Chrystia Freeland pulled the hammer out of the tool box and invoked the Quarantine Act, ordering travellers returning to Canada to self-isolate for 14 days or face fines or even jail time, no one even blinked.

Perhaps we should be grateful that our politicians haven’t resorted to the same over-the-top antics as some Italian mayors, especially the one who threatened non-compliant citizens by saying, “We will send police. With flame-throwers.” Toronto Mayor John Tory’s “C’mon, people”  plea paled in comparison.

But while the messages coming from our premiers and mayors may be less aggressive, they’re just as threatening: your behaviour is being monitored, and transgressors will be punished. And it’s happening across the land.

“We’ve got to be smarter”

For people who cherish their constitutional rights to liberty, freedom of movement and earning a living — not to mention going to the grocery store, walking the dog or taking the grandkids to the park — this crackdown is unsettling, to say the least.

But, as we’ve seen with the devastation caused by outbreaks of COVID-19 in nursing homes across Canada, especially in B.C. and Ontario, those most at risk of serious complications and death from the infectious disease understand that limiting civil liberties is a necessary evil and one that will save countless lives.

Rene Lewis, a snowbird living in Winnipeg who returned early from her annual vacation in Mesa, Ariz., to a much changed world, agrees that stringent measures are necessary. “When I saw young people congregating on the beaches in Vancouver and in parks around the country, I thought: ‘We’ve got to be smarter than this.’”

Lewis, 70, suffers from a lung condition and her husband has diabetes. She compares people who flaunt social distancing measures to those who refuse to get the flu shot, reasoning that they never get sick.

“That’s all well and good. But you know, you could get it, and then you could give it to me. I’m the one who’s going to die.” She’s very happy that governments are threatening social distance rule-breakers with fines or jail. “In Canada, we’re used to taking care of each other,” she says. “We need to do what we have to do and get COVID-19 out of here.”

This restriction of our civil liberties has come upon us so quickly that we haven’t had time to figure it out, says Roojin Habibi, a lawyer with an educational background in international health law and a research fellow at the Global Strategy Lab at York University in Toronto.

“Right now, nobody’s really sure what the right response is,” says Habibi. “All we know is that when our civil liberties are being infringed upon, it has to be justified.”

For the time being, rights groups like Canadian Civil Liberties Association say, in the short term, they’re okay with stringent measures. The group issued a statement saying, ”We recognize the need for extraordinary measures but also want to ensure that our governments are transparent and accountable.”

While Canadians have so far agreed to sacrifice their civil liberties in the name of greater good, these measures must end as soon as the threat passes. “The powers of the provinces under emergency legislation are substantial, and we need to ensure their exercise is authorized by law, justified,” says the CCLA. “And that actions taken in an emergency don’t simply become our ‘new normal.’”

Fortunately, the provincial emergency acts have built-in expiry dates. In Ontario, for example, the emergency act will be terminated on the 14th day of its proclamation. After that, the measure can be renewed for another 14 days. But if the premier wants to extend it beyond that, he must get parliamentary approval.

Down the road, when life returns to normal, Habibi says there may come a time when we take a hard look at the extraordinary means our leaders took to respond to the crisis. “We have a wonderful document called the Charter of Rights and Freedoms,” she says. So when we have time to reflect, we’ll be able to use this document to “evaluate the government very closely to see whether they had our best interests at heart.”

But until then, most Canadians – including an overwhelming number from the older generations – are willing to put their civil rights on hold in order to fight this terrifying pandemic. Covidiots beware.