From Bad Hair Days to “Speaking Moistly,” 8 Things We’ve Learned About Trudeau From His Daily Briefings 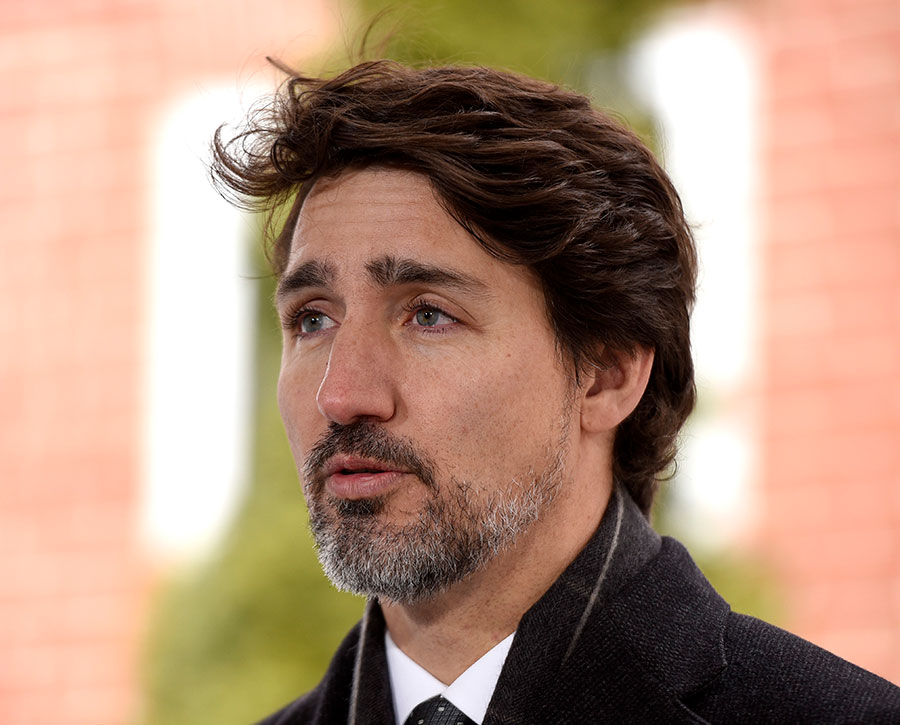 Prime Minister Justin Trudeau has appeared almost daily in front of his Rideau Cottage residence to update Canadians on the government’s response to COVID-19. Photo: The Canadian Press/Justin Tang

Every morning since the COVID-19 crisis began, Prime Minister Justin Trudeau walks out to the podium in front of Rideau Cottage where he’s running the country in self-isolation, and addresses the nation.

Come rain or shine (or sometimes snow), Trudeau has been a steady presence, updating us on the spread of the disease, explaining how his government is responding to the pandemic and never once forgetting to offer a word of thanks to our “heroic” front-line health workers.

And even when he’s concluded his official speech, he must also face a barrage of questions from the press, when he must defend his government’s spending programs and explain, repeatedly, why the lockdown is necessary. It can’t be easy.

Having watched almost all of these gruelling hour-long sessions, I sometimes tune out the political to focus on the personal, and focus less on Trudeau’s messages and more on his look, delivery, favourite clichés and all the other personal tics that become even more magnified under the camera’s unforgivingly cruel lens.

With that in mind, here are eight things to watch for in Trudeau’s daily press conferences.

It’s a daily grind: It can’t be easy for the prime minister to get up there every day and try to reassure Canadians that the government is on top of the pandemic and that everything will be rosy once the crisis passes. Adding to his misery, he must answer the same questions every single day. To his everlasting credit, Trudeau has borne this thankless task in a remarkably calm, unflappable and encouraging manner. In doing so, he’s provided a welcome contrast to the chaotic daily press briefings that unfold south of the border.

Bad hair days: Our endless obsession with Trudeau’s hair continues to resonate on social media, especially now that he’s been forced to adopt a rather shaggy look while living in self-isolation. His ever lengthening coif has prompted widely varying opinions and many questions on Twitter. When will he get it cut? Has he dyed it? Is it a good look? Who really cares? The great debate rages on.

Greetings and salutations: Trudeau opens and closes almost every press conference in French – “Bonjour tout le monde” and “Merci tout le monde.” I’m not sure why he does this. Maybe because the French greeting sounds so much better than “Hi everyone.” But, Trudeau being Trudeau, there’s likely a deeper strategy at play here. Perhaps he’s doing it as a subtle way to reach out to Quebec voters. Then again, I’m probably being overly cynical and reading far too much into a simple greeting.

The “wonderful” Dr. Tam: While on the topic of our two official languages, it’s interesting to note that Trudeau’s answers to reporters in French are often more revealing and colourful than his sometimes stilted English responses. For example, while speaking of the devastating outbreaks of COVID-19 in seniors homes, he described the scenes as “horrific” in French but only dubbed it “a bad situation” in English. And while answering a question as to whether he has faith in his chief health officer Dr. Theresa Tam, in English, he said, “we continue to have confidence in or scientific experts.” But in French, his response was far more illuminating, saying he deeply appreciates the work being done by “the wonderful Dr. Tam.”

Message fatigue: In the early days of the COVID-19 crisis, almost everything Trudeau said seemed steeped in dramatic importance —“you’re not alone,” “the government is here for you” and “we’re trying to help as many people as possible as quickly as possible.” But as the days wore on, these oft-repeated phrases began to  sound increasingly hollow and meaningless, almost like he was delivering a well rehearsed stump speech. And now that the media’s focus is shifting away from the immediate crisis and on to when life will return to normal, Trudeau has begun rolling out a whole new batch of crafted mantras, such as: “we’re not there yet,” “we need to continue listen to our health experts” and “if we move too quickly, everything we’re doing now might have been for nothing.”

Artful dodger: I’d estimate that Trudeau only directly answers about a third of the questions put to him by reporters. If he doesn’t like the direction of the reporter’s query, he’ll repeat the question in his own words and then throw in one of the key messages previously discussed. This strategy infuriates reporters, often provoking them to make the exasperated response, “but you didn’t answer my question.” When he hears this, Trudeau gives a wry smile and a slight shrug of the shoulders, as if to say, “you’re not getting me to bite on that one.”

“In the days and weeks to come:” This is the vague answer Trudeau always employs when ducking a reporter’s questions on when the government will address a certain issue. Sometimes, he’ll double down with, “we’re in ongoing discussions.” Both work equally well and together they serve to deflect the reporter’s question while at the same time giving the media a sound bite that his government has the issue well covered.

“Speaking moistly:” While Trudeau invariably evokes sunny optimism and confidence at his daily press gatherings, he doesn’t always bring his A-game. On such occasions, his normally glib delivery will falter and he’ll mispronounce words, struggle with grammar or utter bizarre phrases. On one infamous occasion, when explaining for the millionth time the need to practice good hygiene, he cautioned us against “speaking moistly” on others. Immediately after saying this bewildering phrase, he shuddered, and hastily added, “what a terrible image.” But it was too late. “Speaking moistly” became an instant meme, and even inspired an auto-tune.