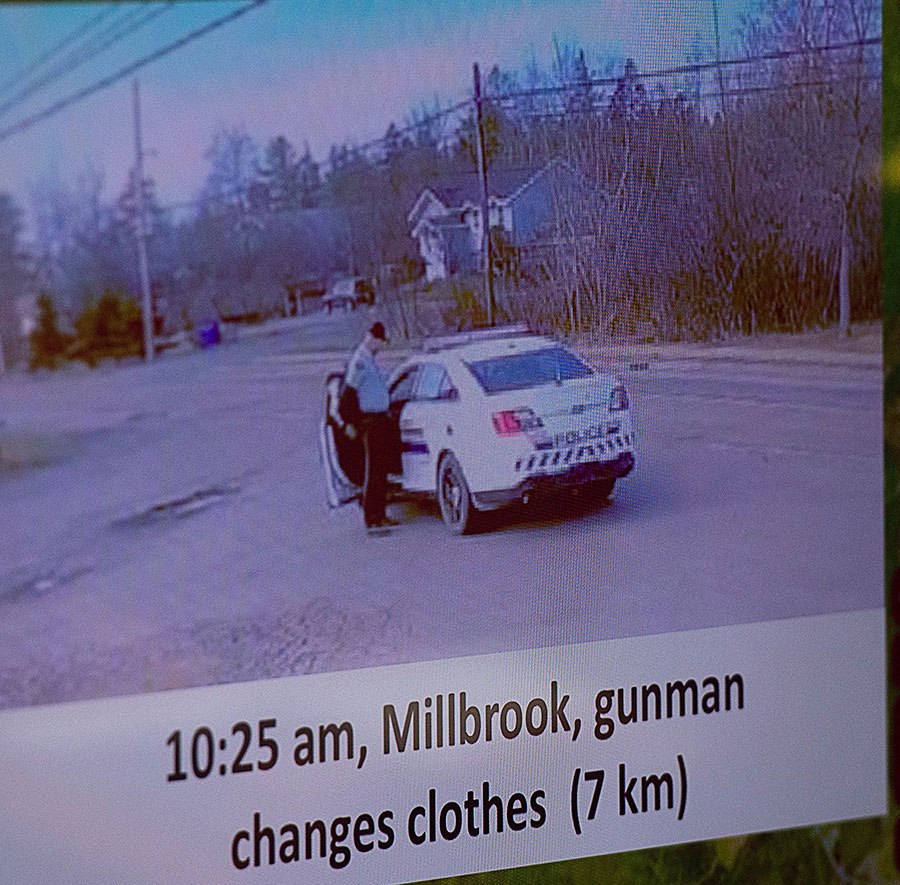 A still of security footage showing the gunman changing clothes beside a replica RCMP vehicle is displayed at a media briefing at RCMP headquarters in Dartmouth, N.S. on Tuesday. Photo: The Canadian Press/Andrew Vaughan

The gunman responsible for the biggest mass shooting in recent Canadian history eluded Nova Scotia police by driving across a field in Portapique, hiding out overnight in an industrial area in Debert and changing clothes and cars several times.

Nova Scotia RCMP revealed crucial details of the shooter’s movements at a press conference Tuesday afternoon, saying they had pieced them together by interviewing witnesses and reviewing video camera footage.

“Though the gunman will never stand trial, we still have a duty to complete this investigation by the same standards that we would if he was,” said Superintendent Darren Campbell, explaining they had interviewed about half of 435 witnesses.

The deadly rampage began with a domestic assault. The gunman’s long-term girlfriend is a “significant key witness” in the string of homicides that started April 18 in rural Portapique and ended almost 100 kilometres away at the Enfield Irving Big Stop, when a tactical unit officer happened to pull in to get gas at the same time as the killer and and shot the 51-year-old suspect just before noon on Sunday.

She told them he had a replica police car, a RCMP uniform and several firearms.

By the time the killing spree was over, 22 people were murdered at 16 separate crime scenes in the communities of Portapique, Wentworth, Debert, Shubenacadie and Milford.

“At this time, priority areas for us are to determine how the gunman obtained access to the equipment he used, to establish the gunman’s movements on April 18 and 19, and to determine if anyone had knowledge of the gunman’s plan, if any, and if they had assisted him in any way,” Campbell said.

A witness told them they saw a car drive across a field in Portapique around 10:30, so police believe that is how the shooter got around them. They have confirmed he arrived at a building in the Debert industrial park at 11:10 and left at 5:45 a.m.

“What he did in that area between those times is of great interest to us. We have conducted a thorough search of the area and we are looking for anyone who may have seen anything suspicious to contact us,” Campbell said Tuesday.

Witnesses told police the gunman was a collector “of many things.” including “including police memorabilia and was in possession of multiple pieces of police uniforms from a variety of agencies.” Campbell said his interest in the RCMP goes back a number of years, and they have confirmed the killer “wore parts of an authentic RCMP uniform, including a shirt and pants with a yellow stripe.”

The denturist, who owned a clinic in Dartmouth, had four restored police cars that he bought at auction, as well as the fifth car he used to escape Portapique, where he killed 13 people the night of April 18 and set fire to several buildings, including his house and garage. That car was outfitted wth a light bar and near-exact RCMP decals.

“How he obtained these decals and how they were produced is an investigative detail that I can’t get into, other than to say that we’ve made progress in this area of our investigation,” Campbell said Tuesday.

They are looking into witness statements that the gunman had a history of domestic assaults that may not have been reported to police.  Campbell confirmed the killer had disputes with some of his victims “over a lengthy period of time,” including “associates, business partners and family members.”

In the days that followed the murderous rampage, families of the victims criticized the RCMP decision to issue public warnings on Twitter in a rural part of Colchester County where some don’t have Internet access and older people aren’t on social media. The first tweet to its 90,000 followers didn’t go out until 9 a.m. Sunday. Police were in the process of activating an emergency alert to go out over cellphones when the killer was shot Sunday.

Nick Beaton told Global News he and his wife Kristen were lying in bed at their home in Belmont on Sunday morning, scrolling through Facebook posts about the shooting 30 minutes away in Portapique, just before she left to see a client in Delbert. The 33-year-old continuing care assistant for the Victorian Order of Nurses and her colleague, nurse Heather O’Brien, were dead by the time Nick texted his wife at 11 a.m. to warn her the suspect was still in area.

At a Friday press conference detailing the timeline of the crime spree that unfolded over 13 hours last weekend, Campbell said it started when the killer assaulted his unnamed common-law partner, who managed to escape and hide in the woods until she called 911 at 6:30 a.m.

That’s when police discovered the killer had “a fully marked and equipped (RCMP) replica vehicle and was wearing a police uniform,” as well as “several firearms that included pistols and long guns.”

RCMP didn’t know that when they responded to a 911 call about a shooter in Portapique at 10:26 p.m.. The tiny community of 100 is just off Highway 2 between Great Village and Bass River, a winding and picturesque road also known as the Glooscap Trail that follows the Bay of Fundy shoreline to Parrsboro. Many small, secluded roads, including those in Portapique, lead off the highway and down to the cliff overlooking the shore of the Minas Basin.

“The homes are set back from the road, some are old, others new, and some are summer residences along the Bay of Fundy,” Campbell said Friday.  “This is a quiet community, there are no sidewalks or streetlights.

Global News reported unnamed sources saying Wortman and his girlfriend were at a house party when they got into an argument and left. Back at his house, Global said the killer allegedly beat his partner, tied her up and returned to the party and began shooting people.

When RCMP got to Portapique Beach Road, Campbell said Friday they found a man with a gunshot wound who told them he was driving down the road in his car when he was shot from a passing vehicle. More police officers arrived to find people dead on the road and several buildings on fire. They found victims in seven separate locations, some of them as police went from house to house to look for the suspect and check on residents.

Police didn’t name the shooter or any of the victims on Friday, save that of Const. Heidi Stevenson, a 23-year veteran of the RCMP who was killed on the highway near Shubenacadie, and Const. Chad Morrison, who was shot in his police cruiser but survived after he drove himself to the hospital. The names of the victims were pieced together from media reports and social media posts from friends and family.

On Saturday night, when they “learned of a possible suspect,” RCMP went to the shooter’s Portapique home, only to find the house and garages “fully engulfed in flames” and two “police cars” and another vehicle on fire, according to Campbell, a support services officer for the N.S. RCMP.

In all, 13 people were killed in Portapique and several houses were set on fire, including that of John Zahl and Elizabeth Joanne Thomas, who lived next to Wortman on Portapique Beach Road. Their son, Justin Zahl, saw an empty lot next to his parents’ cars where their house once stood on a TV newscast and posted a screen grab to Facebook on April 20, saying he hadn’t heard from them since 8 p.m. the night of the shootings. In an April 22 post, he said he was told it would be three weeks before their identity would be confirmed.

A big question mark is what the killer was doing between 11:10 Saturday night when he arrived in Debert and 5:45 a.m. Sunday when he left for Hunter Road in Wentworth, about 40 kilometres away.

That’s where police found three other victims, corrections officers Alana Jenkins, 31, and Sean McLean, 41, and retired firefighter Tom Bagley, 70, a neighbour who likely had seen smoke and went to investigate. According to a report in the Chronicle Herald, Jenkins and McLean knew the shooter, but they were not friends.

Dan Jenkins told the newspaper the killer likely arrived at his daughter’s house on Hunter Road around 6:30 a.m. and the house was set on fire between 7 and 8 a.m. The RCMP said Tuesday he was seen near the Hunter Road house near 6:30″ and believe he shot the victims soon after and stayed in the house “for some time” before leaving the area at 9:35 a.m.

After that, the killer stopped at a house near Highway 4 in Wentowrth and banged on the door, but the homeowners, who recognized him, saw he was driving a police car and had a long gun, so they didn’t answer and called 911 at 9:48 a.m.. The killer left, driving eastbound on Highway 4 toward Truro, shooting retiree Lillian Hyslop, who was out for her morning walk, on the side of the road.

RCMP say he continued to Debert, where a witness told them the killer “pulled over” a vehicle and shot “one of the occupants.” Then he encountered another car, and shot and killed a female. The VON confirmed April 20 that two employees, continuing care assistant Beaton and nurse O’Brien died “in the tragedy” on Sunday.

The next cluster of crimes began just before 11 a.m. when RCMP constables Morrison and Stevenson agreed over the police radio to rendezvous at the junction of Highway 2 and Highway 224 in Shubenacadie. They knew the suspect was driving a replica RCMP car and was dressed like a Mountie, but when a police car approached Morrison on the road, he thought it was Stevenson, Campbell confirmed.

“The approaching police vehicle was actually driven by the gunman,” who pulled up alongside Morrison and “immediately opened fire.” Morrison, who had “several gunshot wounds,” took off, and notified other officers in the area, including Stevenson. Campbell said Stevenson “collided” with the gunman, who shot her and “took her gun and mags.” The killer set both cars on fire, and when a passerby stopped to see what was going on, Wortman shot the driver and took his silver SUV. Family and friends say Shubenacadie pulp mill worker Joey Webber was out running an errand on Sunday when he was killed. He was the sole breadwinner for his young family, which includes his wife and two young daughters.

The suspect then drove to the Shubenacadie home of denturist Gina Goulet, shot her and her dog, changed out of his police officer’s uniform and took her red Mazda 3. A friend said Goulet may have known Wortman professionally, but she had never mentioned his name so it couldn’t have been a close association.

When Wortman stopped at the Enfield Irving Big Stop to get gas about 11:30 a.m. Sunday, a member of the RCMP’s tactical force pulled in to fuel up at the same time. “When the officer exited the vehicle, there was an encounter and the gunman was shot and killed,” Campbell said.

“The situations within the clusters of critical incidents were rapidly evolving, which has increased the complexity of investigating the horrific incidents,” Campbell said, adding that RCMP have set up a tip line and are asking anyone who have photos, videos or any other information from  that 13-hour period to call it in.

“No piece of information is too small, and if you have information we would like to hear from you.”

Halifax photographer Len Wagg captured the breathtaking beauty of the Portapique coast in a tribute he posted to Facebook on last Monday, showing a fisherman silhouetted against a sunrise over the bay.