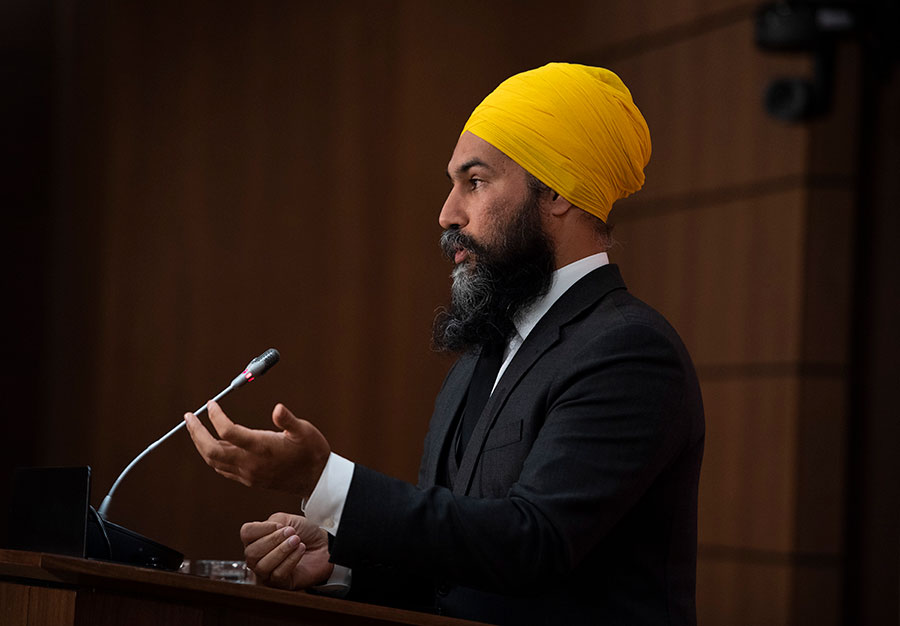 NDP Leader Jagmeet Singh participates in a news conference after he was ordered removed from the House of Commons for calling another MP racist, on Parliament Hill in Ottawa, on Wednesday, June 17, 2020. Photo: The Canadian Press/Justin Tang

Bloc Québécois Leader Yves-François Blanchet is asking for an apology that NDP Leader Jagmeet Singh says he just won’t give.

Yesterday, Singh was ousted from the House of Commons after calling Bloc MP Alan Therrien a racist for refusing to support an NDP motion to address systemic racism in the RCMP, calling for a review of the police force’s budget as well as use of force.

Therrien was the only MP to refuse support and then made what Singh described as a dismissive gesture.

“That’s what it looks like when someone dismisses the reality that people are going through. And so I had a moment of anger in seeing that.”

The Bloc issued a statement later on Wednesday, saying that “discrimination against Indigenous communities and cultural minorities is a major issue” but justified Therrien, explaining that because a public safety committee is currently studying systemic racism in the RCMP, the party didn’t want to handcuff its work.

Earlier today, Blanchet said suspension isn’t enough for Singh’s accusation against the MP. “I hope his apology will be as fervent as his insult was,” he said at a press conference on Parliament Hill. The Bloc leader also called for for a “severe” reprisal of the NDP leader if that apology isn’t forthcoming.

So far, Singh is not apologizing.

Singh’s office said today that the NDP leader has no intention of apologizing. During his term as leader of the NDP, Singh has become a champion for racialized Canadians, several times facing down slurs from hecklers who have mocked him for his cultural practices. And he was front-and-centre in the infamous Trudeau “brownface” scandal during last fall’s election campaign.

The prime minister weighed in Thursday in his daily press briefing at Rideau Cottage, taking  the Bloc to task for not acknowledging systemic racism. Regarding Singh’s comments, he said, “It is not for me to criticize any Canadian, particularly not the only racialized leader in the House of Commons for making other people uncomfortable by calling them out for not recognizing racialized discrimination.”

Trudeau added that there is ample evidence “of systemic racism, systemic discrimination that exists within our country and across a range of institutions.”

Trudeau also said there is systemic racism in policing, and conceded that a disproportionate number of Indigenous people face the use of force by enforcement, including by the RCMP.