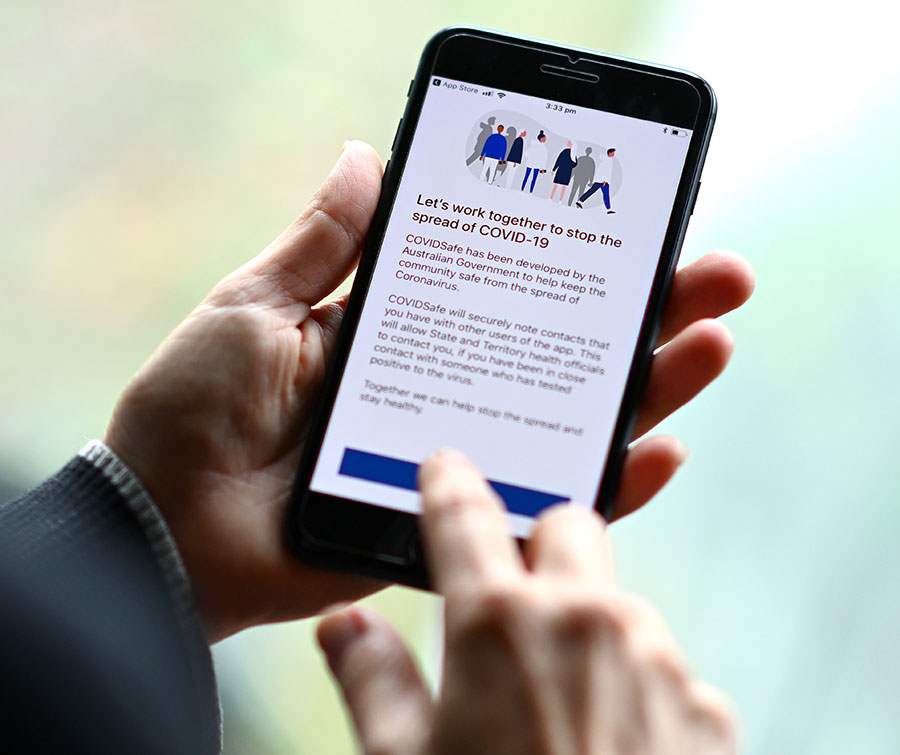 An illustration of Melbourne Australia's COVIDSafe app, a similar app to the COVID-19 tracking app set for release in Canada in July. Photo: Quinn Rooney/Getty Images

On Thursday, Prime Minister Justin Trudeau announced a new smartphone contact tracing app that will alert you if you’ve been in close contact with someone who has tested positive for COVID-19.

The app, which was made in Canada and will launch by July, should help public health agencies track the spread of the disease and thereby manage it more effectively. However, it’s also raising privacy concerns that the data it collects will reside in the servers of big tech companies.

“It will be up to individual Canadians to decide whether to download the app or not, but the app will be most effective when as many people as possible have it,” said Trudeau, announcing the federal government’s endorsement of the code created by volunteers from Shopify, modified by rare collaborative efforts from tech giants Apple, Google and BlackBerry.

The name of the app is causing some confusion. The original open-source code, created by Shopify, goes by the name COVID Shield. The government version, which will run off this code, will be called COVID Alert.

Technology to the Rescue

In a nutshell, here’s how it works. People who test positive for COVID-19 will be asked to upload this result onto the app using a random security code generated by the health-care provider who conducted the test.

If someone using the app comes in close contact with a person who has tested positive, they will get an encrypted (and anonymous) notification sent via Bluetooth to his or her own phone informing them of this fact with a suggestion that they contact their public health authority. Because the program was developed by Apple and Google, it will run on both iOS and Android smartphones.

The goal of the app is to alert people of the possibility that they may have been exposed to the coronavirus and suggest they take appropriate measures — such as getting tested themselves or going into self-isolation for 14 days.

By alerting the public that they might be in danger of infection, the government hopes to curb the spread of the disease by quickly identifying new cases and, either minimize exposure or treating the patient in a timely manner. It’s all meant to cut down the risk of the dreaded second wave of COVID-19, especially as economies open up and people begin returning to work.

Trudeau said that the app will make the work of contact tracing less laborious. Right now, the federal government and provinces are employing thousands of interviewers to contact each infected person by phone and then manually enter the results into a database administered by Statistics Canada.

The prime minister said the beauty of the app lies in its simplicity. “It’s something you can just download and forget about,” he said. “People can be confident that this is an easy measure that they can have to continue to keep us all safe as we reopen, as we get more active.”

And while he promised that it will be voluntary, anonymous and “respectful of your privacy,” many will likely think twice before uploading such sensitive health information or, even worse, putting it right into the hands of big tech companies.

Similar COVID-19 tracing apps in Norway, Kuwait and Bahrain have come under heavy criticism after it was found that users were being tracked by GPS and in real-time. “Bahrain, Kuwait and Norway have run roughshod over people’s privacy, with highly invasive surveillance tools, which go far beyond what is justified in efforts to tackle COVID-19,” said Claudio Guarnieri, head of Amnesty International’s Security Lab.

However, government officials say the app follows privacy protocols by not collecting user’s personal or location data and will delete all the information it gathers after two weeks.

A post on the COVID Shield website counters concerns, suggesting that while people may be leery of sharing their personal health information, the trade-off is that it will be used to fight a scary disease. “In short, the privacy implications of using phones for contact tracing are very complicated. The limited scope of Apple and Google’s joint project is the best effort to date to balance those trade-offs,” read the statement.

Others are criticizing the app for its lack of human touch and that it could cause more alarm than good.

“There is a danger of being too technological and relying too much on text and emails and alienating or freaking out people because you’re telling them quite alarming news through quite casual communications,” said James Bethell, U.K.’s minister for innovation at the Department of Health and Social Care

And while the federal government would like there to be one app for the entire country, Alberta has already produced and is using its own technology, which it’s calling ABTraceTogether.

Ontario Premier Doug Ford said his province will roll out a customized version of the app in July. “If we don’t have the co-operation of the people of Ontario — we put ourselves more at risk — it’s 100 per cent private,” he said. “We need people to download this app — it’s going to protect us, it’s going to protect our families.”

Big Brother and the Sometimes Scary World of Hi-Tech Disruption