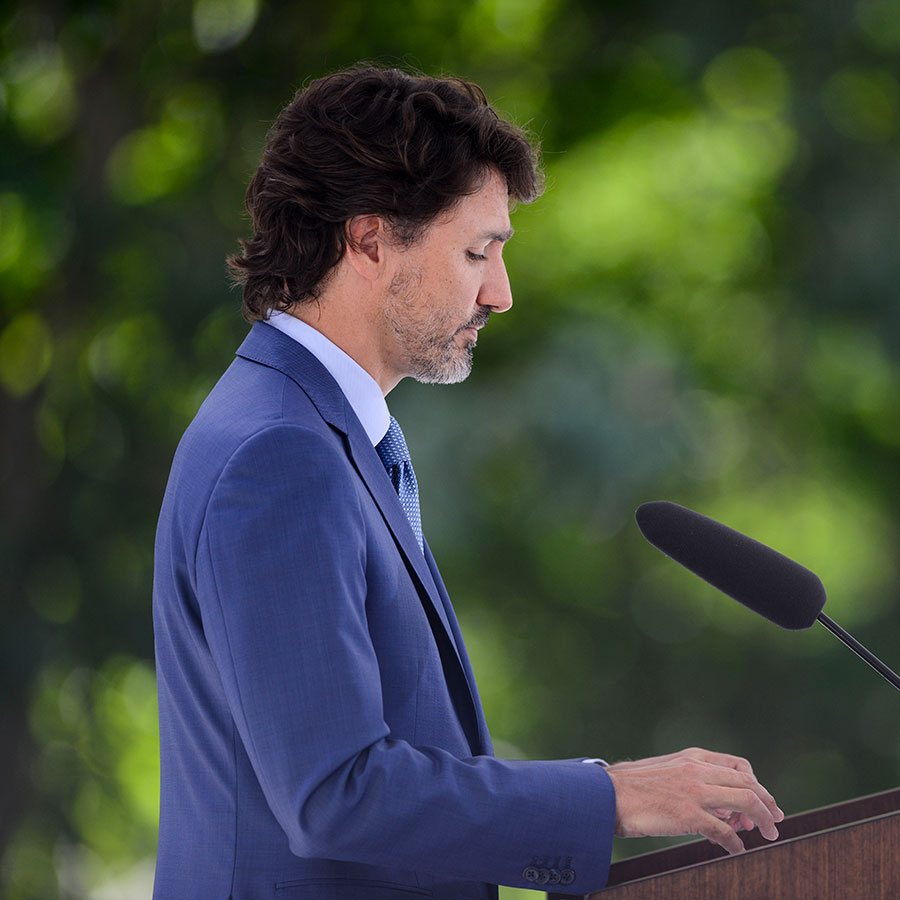 Prime Minister Justin Trudeau holds a press conference at Rideau Cottage in Ottawa on Monday, where he apologized for his part in the WE Charity affair. Photo: The Canadian Press/Sean Kilpatrick

On Monday, Prime Minister Justin Trudeau cranked up the apology machine that has served him well during past scandals, hoping to explain and defuse the rapidly growing controversy concerning his involvement in the WE Charity affair.

“I made a mistake in not recusing myself from the discussions given our family’s history,” Trudeau said at a media briefing outside Rideau Cottage in Ottawa today. “I am sincerely sorry about not having done that.”

Trudeau tried to paint his involvement as an error in judgment, for which he takes full ownership. “By not withdrawing from these conversations” he says he should have instead allowed “the public service to handle the contract.” And he added that “In this situation the mistake that we made was on me. And I take responsibility for it.”

Did It For the Kids

In repeating these key message time and time again during today’s press conference, Trudeau was hoping to douse the flames of this controversy that has not only landed him in the middle of another ethics probe but has engulfed family members as well.

And while he maintains he is “sincerely sorry” and “deeply regrets” the role he played in WE charity scandal, he claims he was only doing it for the kids.

“I got into politics to help people shape their country for the better. I’ve been youth critic and youth minister. Every step of the way I’ve tried to create opportunities for young people to serve,” he said. “During this unprecedented pandemic we got very creative with a range of programs designed to help Canadians, to help families, to help businesses — and yes, to help young people.”

“I’m particularly sorry because not only has it created unnecessary controversy but it also means that young people who are facing difficult times right now, getting summer jobs, contributing to their communities, are going to have to wait a little longer before getting those opportunities to serve. That’s frustrating.”

This tactic recalls the strategy employed by Trudeau when trying to explain his role in the SNC-Lavalin scandal. At the time he said he became involved behind closed doors in order to protect working Canadians: “The role of the prime minister is to stand up for Canadian jobs, to stand up for the public interest and that’s what I’ve done,” he said during last fall’s leadership debates.

The WE affair began in late June when Trudeau involved himself in the government’s decision to award a multi-million dollar contract to WE, the international children’s charity founded in 1995 by Marc and Craig Kielburger, to administer the Canada Student Grant program.

Under the terms of the contract, the WE group was to receive $19.5 million to recruit student volunteers to take part in volunteer activities and pay them for their service hours.

However, controversy ensued when it was discovered the close friendship that exists between the prime minister and WE’s Kielburger brothers, plus the hundreds of thousands of dollars Trudeau family members have received from the charity over the years. His mother, Margaret received over $300,000 in speaking fees from the group and his brother received $40,000.

Not only did his family members received speaking fees, but WE is also a big booster of the Trudeau brand, at least judging by this video homage to the Liberal leader the group released as part of Canada’s 150th birthday celebrations.

It’s now clear to everyone that Trudeau’s involvement with the WE contract was dodgy right from the start but, by the time he had the good sense to cancel it, the damage to his brand had been done.

And the fallout has only grown since. The Conservatives are calling for a police investigation, the House of Commons finance committee is preparing to hold hearings into his role and Ethics Commissioner Mario Dion has announced he is launching an investigation into the affair.

Speaking to reporters after his press conference, Trudeau wouldn’t say whether or not he would testify at the finance committee looking into the affair, saying he hasn’t yet been asked but would announce his decision if called on to do so.

And he brushed aside calls to step aside during the probe, saying that was just opposition parties politicking.

“I have my job to do as well,” he said. “To make sure that Canadians are well supported through this pandemic and that we have an economic restart that goes smoothly.”