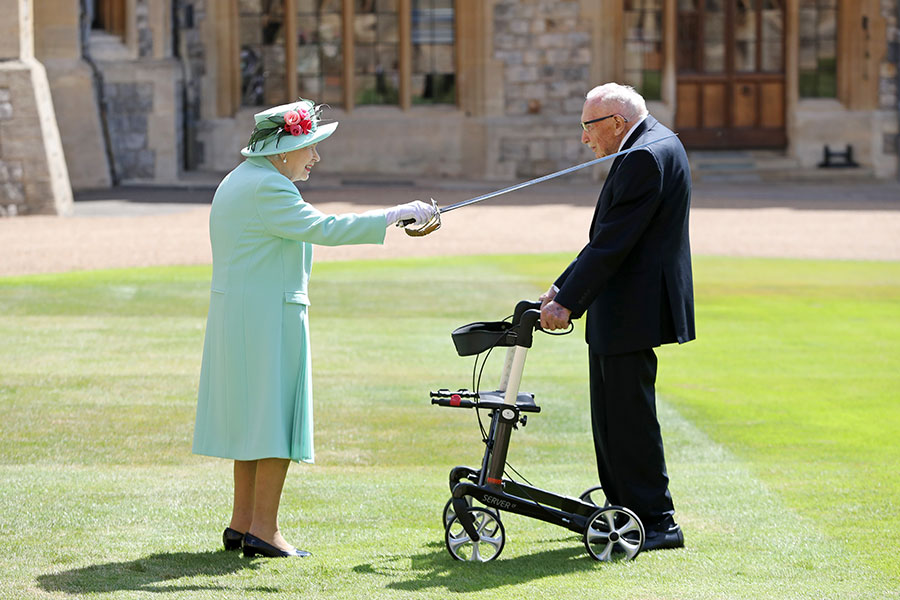 The 100-year-old British War veteran, who raised more than £32 million (more than $54 million Canadian) for his country’s National Health Service workers on the front lines of England’s COVID-19 response by completing 100 laps of his garden ahead of his centenary in April, received the insignia of Knight Bachelor from Queen Elizabeth II on Friday at Windsor Castle.

“I am absolutely overawed,” Moore told the BBC.  “This is such a high award and to get it from Her Majesty as well — what more can anyone wish for? This has been an absolutely magnificent day for me. The money [raised] is very useful but you’ve only one Queen and when you get a message from the Queen there’s no value that can be placed on that.”

The BBC also noted that the Queen told the centenarian, “Thank you so much, an amazing amount of money you raised.”

Moore, now technically known as Captain Sir Thomas Moore, received his investiture in a private ceremony at Windsor Castle, which the BBC notes is believed to be the first socially-distanced knighting. The 94-year-old monarch entered the courtyard of Windsor Castle to the music of bagpipes and used a sword that belonged to her father, King George VI, to knight Moore. With members of his family watching on from a distance, the centenarian stood for the investiture, clutching the same familiar walker he used to help walk laps around his garden for charity.

The Queen performed the investiture after attending the low-key wedding of her granddaughter, Princess Beatrice, to real estate developer Edoardo Mapelli Mozzi at a chapel near Windsor Castle.

It’s also notable that previously scheduled royal investitures had been postponed in the wake of the global pandemic, but that Her Majesty made an exception for Moore — choosing to celebrate a man who became a global symbol of resiliency, bravery, kindness and charity during these difficult times.

In fact, countless fans around the world, including British Prime Minister Boris Johnson, had called for the honour in recent months. On Wednesday it was announced that Moore would receive his knighthood at Windsor Castle, where the Queen has been isolating during the COVID-19 pandemic.

“I could never have imagined this would happen to me,” Moore said in a statement posted to his Twitter account earlier in the week. “It is such a huge honour and I am very much looking forward to meeting Her Majesty The Queen. It is going to be the most special of days for me.”

He ended the message with #FridayWillBeAGoodDay, a play on his oft-repeated mantra of “Tomorrow will be a good day.”

On his 100th birthday, Moore was given the honorary title of colonel in recognition of his fundraising efforts. And beyond the money he’s raised, “Captain Tom,” as Moore is affectionately called, has inspired others to selflessness and charity and to challenge themselves physically.

That includes a 99-year-old Manchester woman who raised thousands of dollars after pledging to walk her driveway 100 times before turning 100, a 90-year-old Scottish woman who climbed the stairs in her home 282 times (the equivalent of climbing the height of Suilven mountain), a 91-year-old Welsh farmer who completed 91 laps around his home to raise money for the NHS and a six-year-old Bristol boy with spina bifida, who raised £93 thousand — in one day.

COVID-19: The Strength of Canadian Indigenous Communities in the Face of Inequality