What’s Fuelling Anti-Mask Rage and Why Are Older Generations Getting Blamed For It? 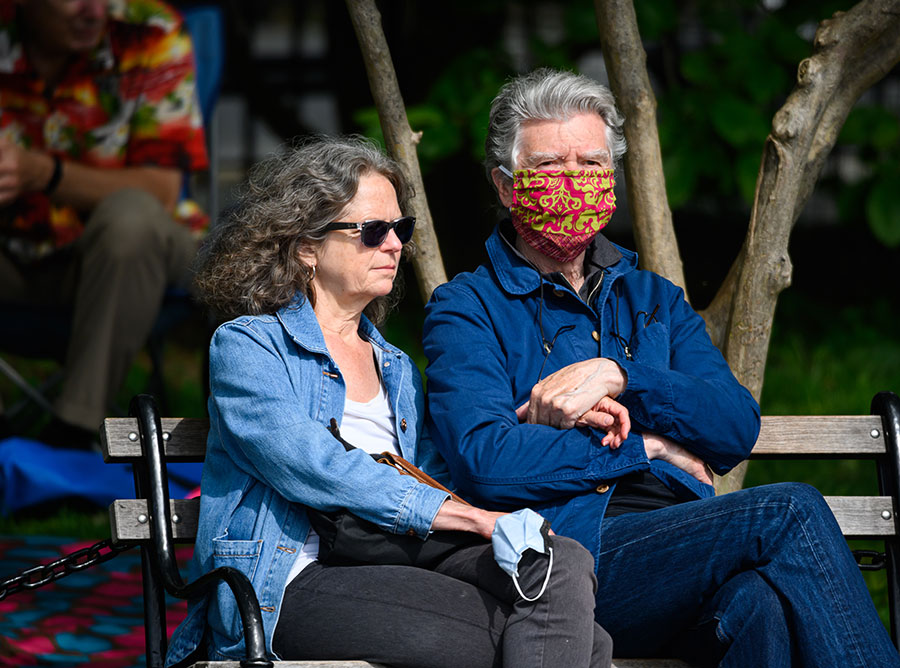 The recent shooting death of a 73-year-old man by police and the hate-fuelled rant of a 48-year man at a grocery store — not to mention the plethora of over-the-top outbursts on social media and viral videos — are fuelling a growing impression that the older generation is largely responsible for the anti-mask sentiment that’s percolating throughout North America.

The tragic shooting death of the 73-year-old Haliburton, Ont., man by the OPP last week was apparently touched off by his refusal to follow local ordinances and wear a protective mask to hinder the spread of COVID-19. The senior became so incensed about being asked to wear a mask that he allegedly assaulted a store clerk. And when police showed up at his door, a dispute ensued and ended up with officers discharging their firearms.

That incident comes in the wake of an infamous video making the rounds showing a 48-year-old man going off in an epic rant against masks, foreigners and the Chinese government, stemming from his refusal to wear a mask while shopping in a Mississauga, Ont. grocery store.

Combine these incidents with the raft of videos  of people protesting vigorously against mask-wearing ordinances — many of whom appear to be 40-plus — and it’s no wonder that the pervading sentiment on social media is that the majority of rebels who refuse to cover their mouth and nose in public overwhelmingly come from the older generations.

The reasons people give for not abiding by mandatory mask rules is that they’re awkward to put on and uncomfortable to wear (especially in the summer heat). And they all seem to cling to the overriding suspicion that wearing a facial covering really doesn’t do any good in stopping the spread of infection.

These anti-maskers say they’re fed up with being imposed upon by un-elected public health officials and feel it’s time to get society back to the way it was.

In the U.S., the anti-mask movement is depicted as a loose gathering of older, red-state living, Trump-loving Republicans or independent-minded Big Brother conspiracy theorists. And they all operate on the same principle that mask-wearing laws violate their first amendments right to the exercise of freedom.

But that’s in the U.S., where there’s so much noise and everything related to COVID-19 has taken on a hyper-politicized nature.

Here in Canada, (the Mississauga man’s tirade notwithstanding) anti-maskers tend to be largely a collection of “ornery people who don’t like to be told what to do,” suggests David Cravit, Chief Marketing Officer at CARP and author of Beyond Age Rage.

Does Age Play a Roll?

But does age really have a bearing on our willingness — or lack thereof — to comply with mask rules at public gatherings and retail outlets.

A recent Abacus poll suggests that age does play a role. The polling firm asked 1,500 Canadians: “When you go into a public place like a retail store, do you wear a mask?” The breakdown of the answers by age reveals that one’s willingness to adapt to mask rules may indeed be generational.

According to these findings, the generation most likely to say they always wear a mask were young people. The next highest age group to accept masks were 60 and over, a group that’s most at risk of dying from COVID-19. However, middle-aged people — 40-something Gen-Xers in particular — had the lowest mask acceptance rate.

Cravit suggests that the poll results may not be a completely accurate reflection of what’s going on out there. He feels that anti-mask rebels come from all ages, but that the older generations are an easy target.

Part of the reason behind their unwillingness to wear facial covering may be a result of the “highly incompetent” communications on the part of public health authorities. “First, health officials said not to wear masks because they weren’t effective in preventing the spread of infection,” Cravit relates. “Then they went from ‘maybe you should wear a mask’ to ‘masks should be mandatory’ in the span of a few weeks.”

Cynthia Carr, an epidemiologist from Winnipeg and founder of Epi Research Inc., a company that gathers data to evaluate health policy and planning programs, agrees that the evolving messages about the efficacy of masks has confused the issue.

“In the beginning, people were told not to wear ‘medical-grade’ masks in order to ensure their was an adequate supply for the medical system,” Carr says. “Also, the early message was that masks did not protect you from getting sick — they were meant for the person who was sick to wear.”

And as our knowledge of the disease has increased, especially the high number of disease spreaders who have the virus without showing any symptoms, Carr feels that, “there’s a perception that the message has changed.”

Despite the confusion over messaging, the intent behind the importance of wearing a mask has remained the same. “Ultimately, the reason for wearing a mask is to stop the chain of transmission from yourself to someone else,” she says.

As to the poll results that suggest middle-aged Canadians are slower to adopt mask-wearing habits, Carr agrees with Cravit on questioning their accuracy.

“Quite frankly I don’t see younger people buying in. It’s older people I see wearing masks,” she says. Certainly, the overwhelming number of videos of unmasked younger people partying at beaches and bars lends support to her conclusion.

And Carr offers an interesting explanation as to why anyone, no matter what age, would choose to rebel against the mask rules.

“In Canada, wearing masks is not part of the norm, as it is in Asia. So seeing people wearing masks is a visual reminder or trigger of something really bad going on,” she explains. “And it’s been going on for months. That ongoing uncertainty leads to escalating stress.”

This may help explain why the anti-maskers that are melting down in these viral videos become absolutely incensed about something as simple as wearing a piece of cloth over your mouth and nose. “Some people don’t want to think about the disease,” she explains. “They’re already at max stress levels and they get triggered by seeing a mask.”

Finally, there’s the notion among anti-maskers that they’re immune to COVID-19 and that, even if they get it, it’s not likely to be serious. The statistics certainly back this up. As Cravit points out, the vast majority of COVID-19-related fatalities in Canada — 96 per cent — occur in people over the age of 60.

“People who refuse to wear masks might be looking at the odds and saying, ‘I’m willing to take the risk,'” he says.

Carr, however, warns people from age groups that might be less at risk, not to adopt this line of reasoning to inform their decision on whether to wear a mask or not.

“Even if you’re in age group that’s less likely to be affected, you’re not less likely to transmit it,” she says. “You don’t want to risk it. Just wear a mask and protect yourself. Because that’s much easier than trying to fix it once your sick.”