Let the Games Begin! Pandemic-Era Sports Resume With a Much Different Look and Feel 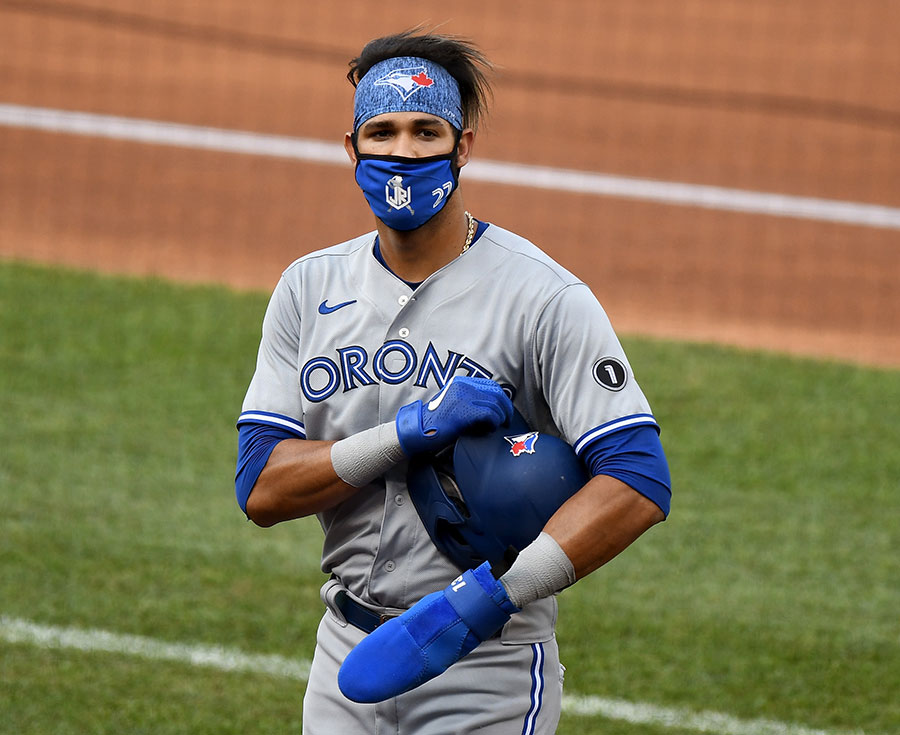 Lourdes Gurriel Jr. of the Toronto Blue Jays walks to the dugout in the first inning against the Washington Nationals at Nationals Park on Monday wearing a face mask. Photo: Greg Fiume/Getty Images

When the Miami Marlins home opener was cancelled Monday night due to an outbreak of COVID-19 among players and coaches, it threw a very promising start to the Major League Baseball season into chaos.

And it showed just how very fragile the footing is for all sports leagues as they try to relaunch their pandemic-interrupted seasons. Just completing their summer schedule, never mind crowning a champion, could indeed become the biggest challenge.

The boys of summer had just completed their first weekend of meaningful action after shutting down for four months due to COVID.

Despite the fact that teams played in front of empty stadia, wore masks and abstained from ingrained player rituals like spitting sunflower seeds or tobacco juice or high-fives, it was a welcome balm for the bruised sporting soul that’s so far had to get by on Italian soccer. (Yes, I’ve been filling the sports void by watching Serie A. Juventus finished first, in case anyone’s interested.)

But the outbreak on the Marlins has dampened some of those good stories from opening weekend. (Like the promising 2-2 start by the Toronto Blue Jays). Unfortunately, the hopeful prospect of watching our favourite summer sport has given way to frustration at the impact this pernicious pandemic is placing on everything. Sports, which is supposed to provide an escape from the trials and tribulations of everyday life, isn’t able to perform that function.

The Marlins no-go is having an inevitable cascading effect on other games. Because the clubhouse they used over the weekend in Philadelphia is going through a deep clean, the New York Yankees vs. Philadelphia Phillies game has also been nixed.

We can expect more of these cancellations not only in Miami, in a state which is currently a hot spot for the disease, but in hockey and basketball, as those two leagues struggle to relaunch their interrupted seasons this week.

With this dark cloud of uncertainty hanging over every match, like many fans, I’ll be adopting a cautious approach to following hockey and baseball. If the NHL and NBA somehow manage to salvage what’s left of this wrecked seasons, I’ll happily watch.

But I’m not going to get too invested in the notion of a complete season and the crowning a champion. Because even though leagues are imposing rigorous testing and physical distancing measures, COVID-19 might prove to be far too big of an opponent. It’s entirely possible that this deadly and unpredictable menace might just force too many outbreaks that the leagues will have no choice but to cancel their seasons.

If this worst-case scenario doesn’t play out, it’s going to be a very peculiar sporting summer indeed. Not only are the seasons shorter but with team playing in “bubble” cities in front of empty stadia, there’s no home-field advantage. This oddity applies especially to the Blue Jays who, because of ongoing border closures between Canada and the U.S., will be forced to play their “home” games in Buffalo, home of their minor league affiliate. That’s going to take some getting used to.

As well as implementing strict testing and physical distancing measures, all three leagues have adopted a number of rule changes that are aimed at adding novelty to the sports, a nod to the fact that this is a summer like no other. Let’s look at some of the key rule changes in baseball, hockey and basketball and cross our fingers that they will somehow manage to complete their seasons.

The good news? The expanded playoffs will give marginal teams, like the Toronto/Buffalo Blue Jays to qualify for the playoffs. The team is loaded with young prospects and if they all get hot at the right time, there’s an outside chance they’ll be around for the post-season party.

The good news? Under the expanded playoff format, all Canadian teams (with the exception of the Ottawa Senators) will make it to the post-season. The Montreal Canadiens will face the Pittsburgh Penguins, Toronto Maple Leafs will play the Columbus Blue Jackets, Edmonton Oilers will play the Chicago Blackhawks, Vancouver Canucks will play the Minnesota Wild and an all-Canadian matchup will see the Calgary Flames play the Winnipeg Jets. Montreal and Calgary are both flawed teams and will likely bow out early. But the others have solid units with a serious shot at glory. Who knows, we could see a Canadian team in the Stanley Cup finals for the first time since 2006, when the Oilers lost to the Carolina Hurricanes in seven games.

The good news? As it stands right now, the defending champion Toronto Raptors occupy second place in the Eastern Division and have already clinched a playoff berth. While the Raps will be hard-pressed to catch the division-leading Milwaukee Bucks, they will be looking to secure their three-game lead over the Boston Celtics. And this playoff-tested team has a great shot at repeating. The victory parade might look a bit different than it did last year.