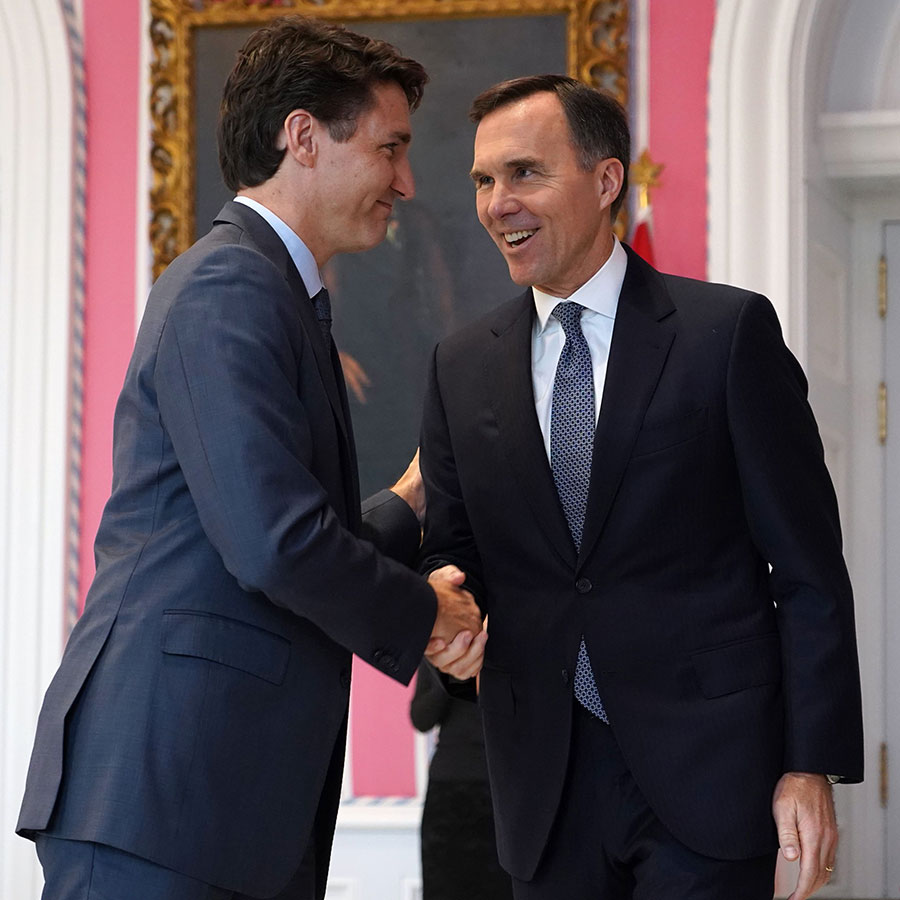 Canadian Prime Minister Justin Trudeau shakes hands with Minister of Finance Bill Morneau in 2019. Trudeau may have no choice but to dump Morneau in order to avert a fall election. Photo: Chris Wattie/AFP/Getty Images

As Justin Trudeau’s credibility spirals downward due to the recent WE Charity scandal, one emboldened opposition party is seizing the opportunity to inflict more damage on the Liberal minority.

On Wednesday, Bloc Québécois leader Yves-François Blanchet threatened to trigger a fall election unless someone resigns over the WE Charity contract scandal.

“Which is more dangerous — the mismanagement of a crisis, or taking the time to change the people who are managing the crisis?” Blanchet asked during a press conference in Ottawa. His ultimatum: unless the Liberals offer up a sacrificial lamb, the Bloc leader vows he will prepare a non-confidence motion which, if passed, could spark an election.

While his main target is Finance Minister Bill Morneau, Blanchet got full value out of his ultimatum by also calling for the Prime Minister’s Chief of Staff Katie Telford and Justin Trudeau himself to resign.

Canadians Over 55 Souring On Trudeau

The threat to topple the government and trigger an election that no one really wants comes in the wake of the WE Charity scandal. The opposition is still fuming that high-placed Liberals offered a huge contract to an organization with which they had close ties. Several of Trudeau’s family members received payments for speaking on behalf of WE. And Morneau was recently forced to pay back WE $41,000 in travel expenses for personal trips he and his family took to Kenya and Ecuador in  2017.

The outcry over the contract forced the government to eventually cancel it but not before being embarrassed by a Finance Committee hearing that turned into an all-out attack on the government’s record on ethics. And while Trudeau and his ministers did an able job defusing the controversy, one big question remains unanswered: why didn’t Trudeau or Morneau recuse themselves from a cabinet decision to hire an organization to which they were closely linked?

The Liberals have paid dearly for the scandal, taking a big hit in popularity that had been sky-high since the pandemic struck. A recent Leger360 poll found that close to half of Canadians say that the WE Charity scandal has “worsened their opinion of Justin Trudeau.” This negative view rose to 59 per cent among Canadians 55 and over.

Moreover, Trudeau and Morneau, both of whom have apologized for not recusing themselves from the WE decision, will have to face yet another round of awkward questions when their case comes before the Ethics Commissioner, who is looking into whether the pair violated the Conflict of Interest Act.

Blanchet clearly wants more than an apology, and he’s not going to let this golden opportunity pass without inflicting some damage. It’s why many are viewing his ultimatum as little more than political gamesmanship, a chance to fire one last parting shot against the government before everyone goes home for the summer.

The Bloc leader said he hasn’t spoken to any of the other parties about his threat to bring down the government. The leading candidates for the Conservative leadership race hedged their bets on whether they would support such a move. Peter MacKay’s campaign issued a statement saying Canadians are “fed up with the unethical behaviour” but stopped short of backing Blanchet’s election threat.

The Prime Minister’s Office issued a declaration of support for his embattled finance minister, stating the “Prime Minister has full confidence in Minister Morneau, and any statement to the contrary is false.” As we’ve seen so many times in the past, these public votes of confidence aren’t exactly binding.

But that support seems rather shaky at the moment, especially in light of a Globe and Mail report describing mounting tensions between Morneau and Trudeau over the pandemic relief measures. According to the report, insiders suggest that “Trudeau is uncertain whether Mr. Morneau is the right fit to navigate the country into a post-pandemic economic recovery.” The Globe report also suggested that Trudeau is freezing out Morneau and leaning more and more on the advice of Mark Carney, the former head of the Bank of Canada and, more recently, the Bank of England.

Do We Want Another Election?

It’s uncertain whether Blanchet’s political maneuvering (or “hissy fit,” as NDP MP Charlie Angus dubbed it) will lead to an early election. The Liberals maintain that Canadians don’t really want another election, especially not while we’re struggling with the crippling effects of this severe health and economic crisis.

However, this may change depending on whether the Ethics Commissioner finds that the government violated conflict-of-interest regulations in awarding the WE contract. The Leger360 poll also found that close to half of Canadians would support an election “if Justin Trudeau is found guilty of breaching the ethical code of conduct.” Only 35 per cent of Canadians said they felt an election was completely unnecessary, even if Trudeau is found to have violated ethics for the third time in his short reign.

In light of these surprising findings, it seems almost certain that Trudeau’s public support of his finance minister will whither away once his minority government is threatened by an election.

For every political scandal, there has to be a scapegoat. And it’s looking more and more like Liberals are fitting up Morneau to serve in that role.