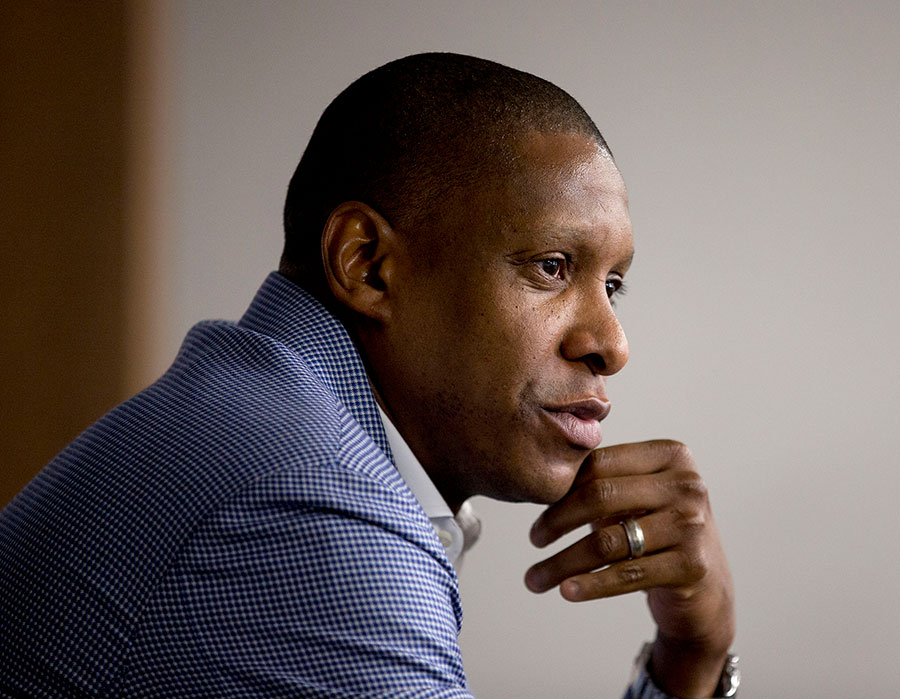 New footage from the 2019 finals altercation that's been the subject of an ongoing legal battle between Raptors' president Masai Ujiri and an Alameda police officer shows the team president was shoved twice before retaliating. Photo: Photo: Carlos Osorio/Toronto Star via Getty Images

Thank you to everybody who has expressed disappointment and concern regarding the video that was recently released. My family and I are deeply grateful for your care and consideration.

The video sadly demonstrates how horribly I was treated by a law enforcement officer last year in the midst of my team, the Toronto Raptors, winning its first world championship. It was an exhilarating moment of achievement for our organization, for our players, for our city, for our country, and for me personally, given my long-tenured professional journey in the NBA. Yet, unfortunately, I was reminded in that moment that despite all of my hard work and success, there are some people, including those who are supposed to protect us, who will always and only see me as something that is unworthy of respectful engagement. And, there’s only one indisputable reason why that is the case – because I am Black.

What saddens me most about this ordeal is that the only reason why I am getting the justice I deserve in this moment is because of my success. Because I’m the President of a NBA team, I had access to resources that ensured I could demand and fight for my justice. So many of my brothers and sisters haven’t had, don’t have, and won’t have the same access to resources that assured my justice. And that’s why Black Lives Matter.

And that’s why it’s important for all of us to keep demanding justice. Justice for George. Justice for Breonna. Justice for Elijah. Justice for far too many Black lives that mattered. And justice for Black people around the world, who need our voice and our compassion to save their lives.

Those are the ties that bind us.

With love and determination,

EARLIER: New footage from two separate angles — including from a police body camera — shows Alameda County sheriff’s deputy Alan Strickland shoving Toronto Raptors President Masai Ujiri twice following the conclusion of the Canadian team’s championship win over the Golden State Warriors last June. The footage appears to refute the claims made in a lawsuit claiming assault filed against him by Strickland stemming from the altercation.

The incident occurred after Strickland prevented Ujiri from joining his team on the court after the Raptors’ 114-110 Game 6 championship win over the Golden State Warriors at Oracle Arena in Oakland, Calif. Ujiri then responds with a push of his own before the skirmish is broken up and he joins Raptors point guard Kyle Lowry on the court.

In the brief exchange before the first shove, Strickland uses his forearm to block the then-48-year-old Ujiri in an apparent attempt to ensure he had security credentials. However, in another clip from Strickland’s body cam, Ujiri is seen reaching for his credentials before Strickland shoves him and tells him to “back the f— up.” In the same clip, Ujiri calmly identifies himself after the first shove.

“Why are you pushing me for? I’m the president of the Raptors,” Ujiri says in the body cam footage.

You can watch the footage from different angles below.

In a statement Tuesday, the Raptors organization, who have supported their team president since the lawsuit was filed, continued to back Ujiri.

“We are mindful this remains before the courts, but we have always maintained that the claims made against Masai are baseless and entirely without merit. We believe this video evidence shows exactly that — Masai was not an aggressor but instead was the recipient of two very violent, unwarranted actions. The events of that evening cast a pall over what should have been a night of celebration, and the year since.”

Strickland’s suit, which was filed in February, alleged that Ujiri assaulted him in the moments after Toronto’s victory and that, as a result of the incident, he “suffered injury to his body, health, strength, activity and person, all of which have caused and continue to cause Plaintiff great mental, emotional, psychological, physical, and nervous pain and suffering.”

He and his wife, Kelly Strickland, who’s also named as a Plantiff, are seeking US$75,000 in general damages, as well as other compensation, including punitive damages, lost wages, current and future medical expenses and legal costs.

With the new footage, Ujiri’s legal team has filed a countersuit claiming Strickland falsified their encounter and attempted to portray Ujiri as “the initial aggressor and an inherently violent individual” and goes on to call the officer’s account “a complete fabrication.”

Alameda County Sheriff Greg Ahern initially backed his officer’s accusations, requesting Ujiri be charged with battery of a peace officer claiming that he struck Strickland’s jaw and shoulder. But after a months long investigation — which likely involved a review of the body cam footage — and a meeting with Ujiri and his lawyers last October, the Alameda County District Attorney’s Office declined to press charges.