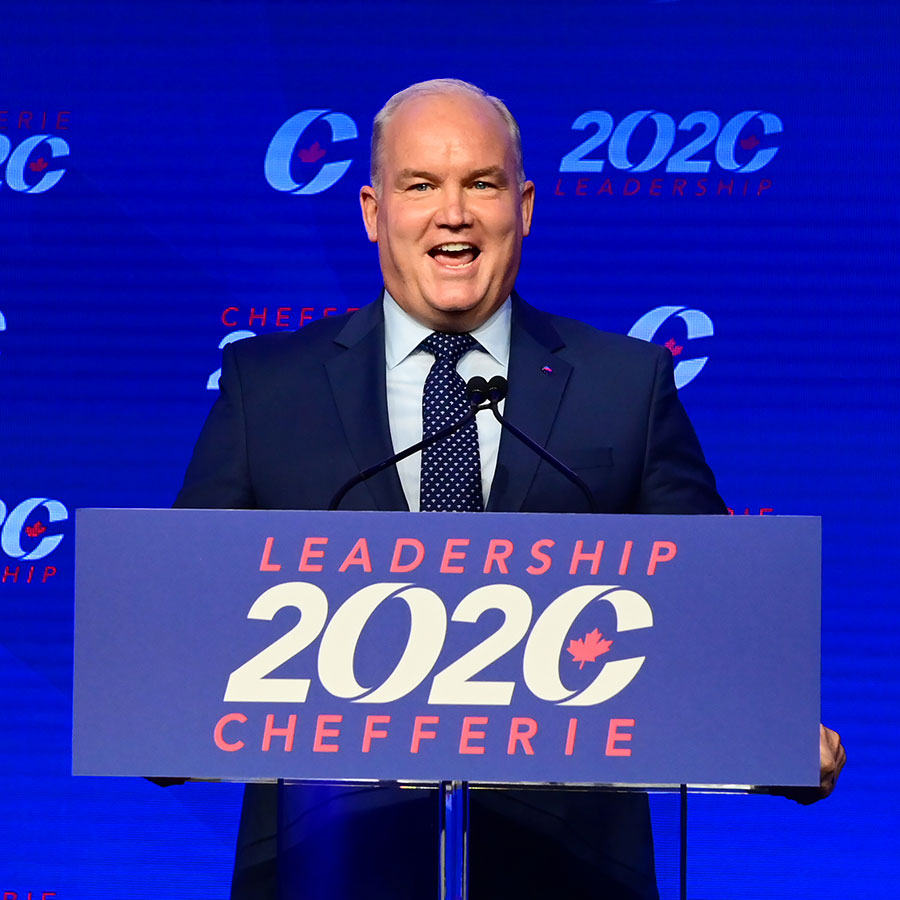 Conservative Party of Canada Leader Erin O'Toole speaks after his win at the 2020 Leadership Election, in Ottawa on Sunday. Photo: The Canadian Press/Sean Kilpatrick

Most of the country was fast asleep last night when Erin O’Toole was crowned as the new leader of the Conservative Party of Canada.

O’Toole, 47, takes over the leadership from Andrew Scheer, whose three-year reign ended yesterday without much to show for it beyond a dispiriting second-place finish to the Justin Trudeau-led Liberals in 2019 that resulted in a deep existential crisis of what it means to be a Conservative member in this day and age.

O’Toole, a relatively unknown politician before last night, must now repair that damage.

“To the millions of Canadians who are still up: Good morning, I’m Erin O’Toole,” the new leader said in his victory speech. “You’re going to be seeing me a lot.”

It’s a promise that won’t be difficult to deliver because viewers who tuned in at dinner time last night didn’t see much of O’Toole or anything else for that matter. They certainly didn’t witness a well-oiled political party ready to lead the country into the future.

That’s because the results of the Conservative leadership convention were delayed by six hours due to a malfunctioning machine that ripped up thousands of mail-in ballots. The night dragged on and on as organizers were forced to manually repair each of the damaged ballots before announcing the results of the first round.

It  didn’t help that in the midst of all the ballot chaos and uncertainty, Scheer emerged to deliver a dark farewell speech that slammed Trudeau as well as the media for its “leftist” narrative.

With Scheer finally out of the way, the voting process managed to get underway, and O’Toole surprised everyone by scoring a decisive victory over establishment candidate and presumed front-runner Peter MacKay. It may have taken a while to crown the winner, but the choice was clear – O’Toole soundly defeated MacKay by 57 per cent to 43 per cent on the final ballot.

O’Toole’s victory shocked many observers and left others scrambling to explain the result. Most felt going into the campaign, which began in January, that MacKay, who had all the trappings of a leader, seemed to have a clear path to victory.

However, he repeatedly failed in conjuring up the same passion as O’Toole did during the campaign. MacKay’s rather wooden speeches and his curious inability to light a fire proved disastrous. His failure to expand his base outside of Ontario and Atlantic Canada proved insufficient to offset his poor showings in Quebec and the West.

So when MacKay barely scraped by on the first ballot, his fate was sealed. O’Toole eventually secured his victory by picking up almost all of the support of the third- and fourth-place candidates, Leslyn Lewis and Derek Sloan.

Lewis’s strong showing, in fact, turned out to be the second major surprise of the night. The Jamaican-born lawyer (and first visible minority to ever run for the Conservative Party leadership) ran a brilliant campaign as the grassroots candidate. Garnering 20 per cent of the vote and raising more than $2 million, she signalled that she will play a big role in the party’s future.

In normal times, political parties use leadership conventions as exercises in brand building. They attempt to capitalize on the drama of the occasion in order to build momentum and project unity to prospective voters. Under normal conditions, O’Toole would have emerged on stage with his family in tow, amid a blaring of triumphant music, a cloud of confetti and cheering crowds.

But in the COVID-19 era, elaborate crowning ceremonies like these just aren’t possible. Without the music, cheering and confetti, it all seems a bit forced and more than a trifle mundane.

So when the final results were announced after one in the morning and only the most dedicated party stalwarts were still awake, it landed with a giant thud. It was a missed opportunity to show off the party’s new leader and polish its tarnished brand.

This failure at launch prompted much criticism on social media with many expressing concern that a party that’s promising to lead the country out of the COVID-19 health and economic crisis was not even able run a smooth leadership convention.

O’Toole, the 47-year-old MP from the Toronto-area riding of Durham and former minister of veterans affairs under Stephen Harper, is undoubtedly hoping this rocky start does not define his term as leader.

Born in Montreal, his family moved to Ontario when he was nine, following the death of his mother. Before serving as an MPP in Ontario, O’Toole had a 12-year career as an RCAF pilot before becoming a corporate lawyer in Toronto. He is married to Rebecca O’Toole and has two children.

While he’s relatively young, he has a wealth of political experience and his work in in Veteran’s Affairs should help him get a grasp of senior’s issues. And even though he’s a young Gen-Xer it feels like he belongs to an older demo.

Perhaps his no-nonsense style and old-school haircut might even appeal to the older, traditional voters who have had enough of Trudeau’s elevated style and chic coif. In fact, in this era where style trumps substance, some might even see O’Toole’s appearance as an antidote to the slick pol – the pragmatic suburban dad who will fight for the values of everyday Canadians and stand up to establishment scions  like MacKay or Trudeau.

And he backs this up with a plainspoken, almost military, way of speaking. “Today you have given me a clear mission,” said the former pilot. “To unite our party, to champion our conservative principles, to show Canadians what we know so well: that Justin Trudeau and his team are failing our great country.”

He was seen as the party’s best choice in rejuvenating a party riven by internal divisions that came to the fore during the Scheer era. Labelling himself a “True Blue Conservative,” he espouses the same economic values as Stephen Harper, earning him the coveted endorsement of the former prime minister and still heart and soul of the party.

Like Harper, O’Toole is in favour of smaller government and would do this through cutting government spending and reducing taxes. And while he is opposed to Trudeau’s carbon tax and supports the oil and gas sector, he does not deny that climate change is a real issue. He has also promised to cut funding to CBC, a controversial platform that may come back to bite him.

While promoting his ability to run a government based on conservative fiscal principles, O’Toole worked strenuously to distance himself from issues like abortion and same-sex marriage – which bedevilled Scheer throughout his term as leader and ultimately became what MacKay said hung around the party’s neck “like a stinking albatross.”

Although O’Toole has said social conservatives will have a “seat at the table,” as a Toronto area politician, he realizes better than most the importance of downplaying divisive issues. Instead, he’ll try to reach out to individuals and groups who never felt comfortable in the party while Scheer was at the helm.

His victory speech heralded a new era of inclusivity in the Conservative Party:

This promise to reach out to diverse groups is why the party ditched Scheer in the first place. They wanted a leader who would unapologetically march in gay pride parades and not be beholden to pressure from any special interest groups.

But while O’Toole promises to fulfill that role, he still faces the enormous task of convincing skeptical Canadian voters. And he must expand the party’s footprint without creating disunity within the party, which will be no easy task, as former leader Brian Mulroney could easily attest.

O’Toole’s future success will depend largely on whether he can pull off a difficult – and risky – political balancing act. Can he win over environmentalists without scaring off Western supporters whose economic interests are so tied up with the oil and gas sector? Can he diversify the party’s social platform without alienating the large chunk of socially conservative voters who, while he won’t publicly admit it, still comprise a sizeable constituency of supporters?

This seemingly insurmountable challenge may be thrust upon O’Toole sooner than later. When Parliament returns on Sept. 23, Trudeau will make a throne speech in which he will outline the details of his government’s post-pandemic recovery plan.

After delivering his throne speech, Trudeau will face a confidence motion – if the Opposition votes against the Liberal leader’s plan, this minority government will fall, and we will face the prospect of another election, this one right in the midst of all-encompassing pandemic.

That doesn’t leave the new Conservative leader much time to introduce himself to Canadians, unify the party, reach out to new constituencies and, above all, prove to voters that his party is capable of running the country.

It’s a tall order, but he appears ready to embrace the challenge.

“I have spent my entire adult life trying to serve Canada and its people. Soon, I will be asking Canadians for the chance to serve as prime minister so we can get our country back on track. I love this country and I am very worried about the course we are on.”

Prime Minister Trudeau Apologizes For Not &#8220;Recusing&#8221; Himself in WE Affair