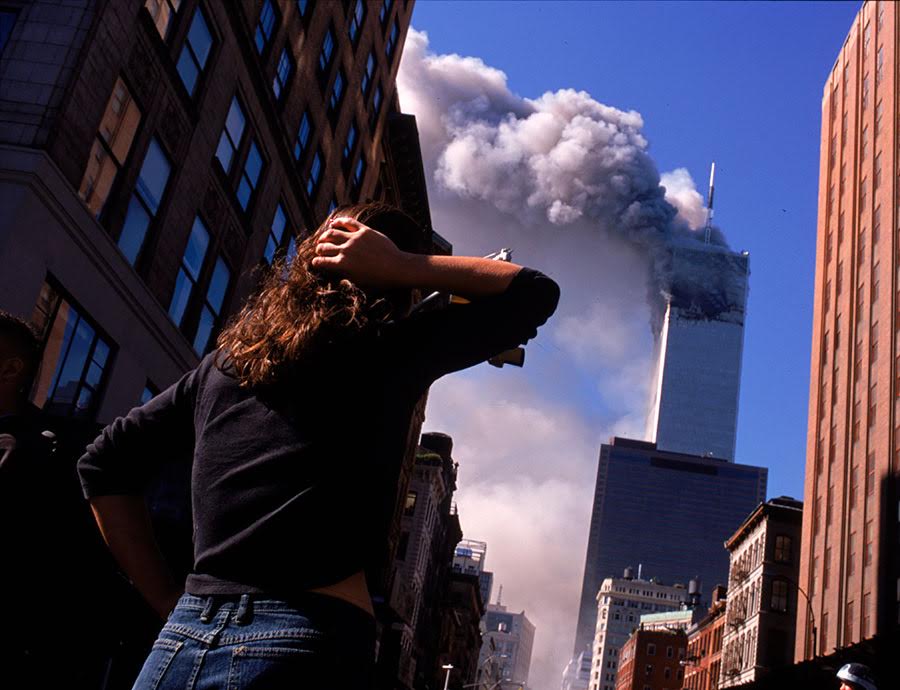 On the morning of Sept. 11, 2001, I was driving to downtown Toronto, to start my day covering the Toronto International Film Festival.

First stop: an interview with Adrienne Shelly, an actress who would be murdered in her New York apartment five years later.

On the car radio, there was a news report of a “small plane” hitting one of the World Trade Centre towers. By the time I reached Shelly’s room, the plane had grown considerably and another building had been hit. The distraught actress was on the phone with her mother, who lived in Lower Manhattan.

We were going through the motions of an interview when the first tower fell. The interview was effectively over, and she phoned her mother again.

When the second tower fell, I was watching it on the TV in a Four Seasons hotel room with a shocked young Canadian actor named Ryan Gosling. Conducting a celebrity interview seemed meaningless at that moment.

It would be my last TIFF interview that day, as the festival went into shutdown and I went into reporter mode.

The musical Come From Away is the defining metaphor for our hosting Americans who were stranded in Canada as the U.S. became a “no fly” zone. But there were Come From Aways across Canada. This was one of them.

Thousands of people had flown to Toronto for one of the three biggest film festivals in the world. Actors and directors, press, publicists, studio executives, producers, investors. The majority had come from either Los Angeles or New York. The sold-out hotels in the city’s Yorkville district typically checked VIP guests in and out with machine-like efficiency. But that machine was broken, along with so many other things that day.

People crowded into TIFF’s onsite office, waiting for word of… well, anything really. Word got out that that three of the planes had been bound for Los Angeles. Denizens of both coasts had reason to worry.

As for where they’d sleep that night, the four-star hotels did their bit for the suit-wearing visitors. The president of the Four Seasons announced that all current guests could stay indefinitely (an easy accommodation to make, considering that the next round of guests was doubtful).

(In an odd reverse turn of events, New York was hosting Fashion Week when the 9/11 attacks occurred. Media outlets that were frustrated in attempts to send reporters into the city discovered that they did indeed have journalists on the scene, fashion writers. Legendary style maven Jeanne Beker filed reports to my paper that week).

As for the festival, when it started up again the next day, it was with a sense of decency and perspective. There would be movies, but no red carpets, no celebrity press conferences, no parties.

Which was as it should be. A mass-killing tends to make our billion-dollar pop culture diversions look tragically absurd. The satirical newspaper The Onion ran a headline later that read, “A shattered nation longs to care about stupid bullsh—again.”

An example of what passed for “news” pre-9/11: I’d written a front page story two days before — an interview with a woman who’d been given mouth-to-mouth resuscitation by Matthew McConaughey after she fainted at his premiere.

Still, “entertainment folk” sometimes have trouble shaking old habits. One party-planner phoned our office that day and asked one of our writers for advice on whether she should continue on with that night’s celebrity party. Sure! Let’s celebrate!

But perhaps the most surreal moment came near the end of the day, nearing the time I was scheduled to interview Anne Heche, the actress and sometime girlfriend of Ellen DeGeneres. Heche was promoting a book about her mental health issues and delusions that came to a boil during the time she was with Ellen.

A phone-call came from the publicist. “Let me guess. You’re calling to tell me the interview is cancelled,” I said. No, Heche was waiting for me.

I was flabbergasted to discover Heche had flown out of Boston’s Logan airport that very morning, the same airport from which two of the hijacked planes took off.

There was a flatness to the interview, perhaps because of meds she’d been taking. She was aware of what had happened, but the gravity of it clearly eluded her. “But back to my book…”

The Onion headline clearly described a short-lived state of mass awareness. Paris Hilton and the Kardashians would cure us of it. President Bush advised people to go out and shop, otherwise the terrorists would win.

I suspected at the time that I wasn’t just witnessing a monumental tragedy. I was looking at the beginning of one. In hindsight, Afghanistan, Iraq, Syria, a refugee crisis that is bringing out the worst in our politics and society, all can be traced back to that day. Meanwhile, back at home, cable, online channels, YouTube podcasts, smartphones, social media and video games became the new, improved shiny distractions in our lives.

Post 9/11, I continued on as an entertainment writer and reporter. But I never took it as seriously again.

This story was originally published in Sept. 2019.

This Day in History: Remembering 9/11