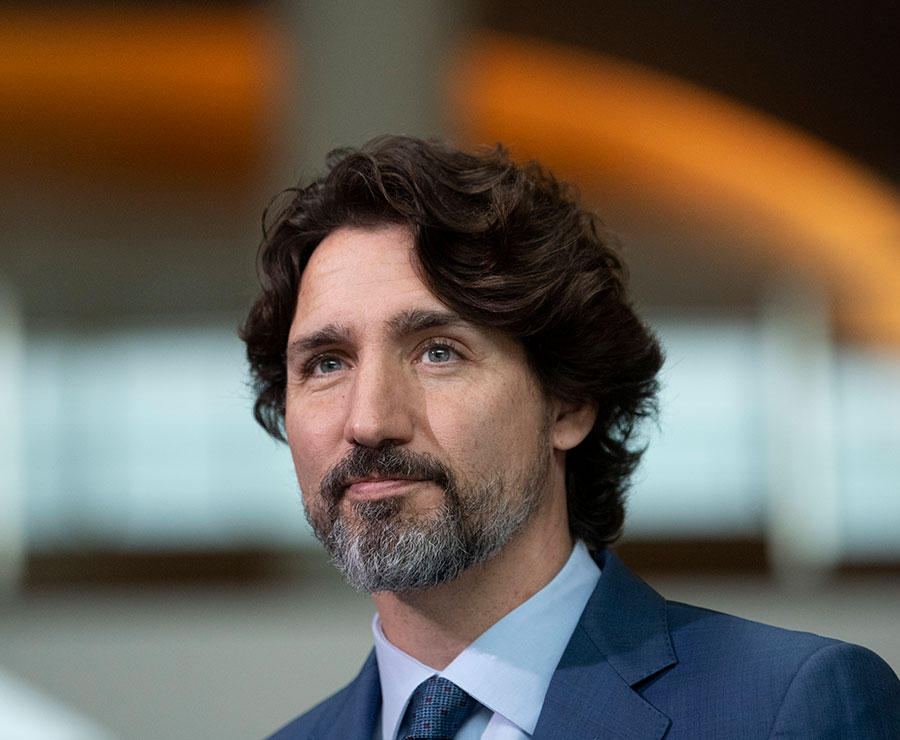 Prime Minister Justin Trudeau took to the airwaves yesterday to warn Canadians that the second wave of COVID-19 is "already underway." Photo: The Canadian Press/Adrian Wyld

Prime Minister Justin Trudeau took to the airwaves yesterday with a nationally broadcast message about the need to remain vigilant about what he called the “second wave” of COVID-19.

“In our four biggest provinces, the second wave isn’t just starting, it’s already underway,” said Trudeau. “We’re on the brink of a fall that could be much worse than the spring.”

In his televised message, the prime minister noted that despite the bad news, we still have time to stop the spread of the disease from ruining more holidays.

“It’s all too likely we won’t be gathering for Thanksgiving, but we still have a shot at Christmas,” Trudeau warned.

The prime minister then changed the tone of his message from the bleak call on the need to double down our efforts to curb the pandemic ahead into an optimistic infomercial about his government’s “Build Back Better” plan.

“This is the time for all of us as Canadians, to do our part for our country, as government does its part for you,” he said. The broad outline of the government’s plan was unveiled in the throne speech, delivered by Governor General Julie Payette earlier in the day.

The throne speech outlined that the recovery would focus on young people, women and racialized groups but had nothing of substance for older Canadians other than vague promises about programs that had already been announced.

Perhaps in attempt to offset this, Trudeau led off his “Build Back Better” pitch with a call out to seniors — “the generation which confronted the Great Depression and World War II” — saying that “they built today’s world” and that building tomorrow’s world starts “with protection for our elders.”

However, other than mentioning the plight seniors are facing because of the pandemic and announcing new national standards for long-term care and some veiled references to home care, the recovery plan said nothing about pension programs, supporting single or widowed people or helping caregivers afford the high cost of looking after their parents.

After giving a lengthy breakdown of all the many costly programs contained in the throne speech, he addressed the question of how the government is going to afford all of this. The government will keep spending and will borrow more to pay for it, said Trudeau, noting that low interest rates make this strategy feasible.

He said now is the time to open the purse strings because, “doing less would mean a slower recovery and bigger deficits in the long run.”

The opposition parties also took to the airwaves to deliver their thoughts on the throne speech.

Conservative Leader Erin O’Toole was also given television time, delivering a speech from his front porch, while he and his wife recover from COVID-19.

O’Toole surprisingly did not mention the tremendous cost to taxpayers that the Liberal recovery plan will incur, leaving that to leadership rival Peter MacKay, who tweeted that future generations “will be paying for this rehashed pre-election megaspend and vote buying scheme.”

Instead of focussing on the cost of building back better, O’Toole castigated the prime minister for not addressing the growing disunity in the country, the paltry support to the energy sector and for failing to “outline practical help” for small businesses.

O’Toole closed with a message of hope: “Canadian families, whether mine or yours, will get through everything. We must do so together with our shared faith in the true north, strong and free.”

And NDP leader Jagmeet Singh said in his televised response to the throne speech that it was just another example of Trudeau’s penchant for making finely worded promises but never delivering on them. “It’s not good enough to just say the words, we need to actually see the actions,” said Singh.

Singh also said the Liberals must impose a tax on higher-income Canadians to pay for the recovery plan. “I know Liberals are afraid to say the words. Let’s say it clearly: we need a wealth tax. The wealthy must pay their fair share.”

Bloc Québécois leader Yves-François Blanchet said he would not support Trudeau’s throne speech unless it was amended to include a $28-billion transfer to the provinces with “no strings attached.”

In the upcoming weeks, Parliament will debate the throne speech and recovery plan. It will eventually be put to vote — if the vote passes, the government will get a green light to proceed with its plan. In the unlikely event that the speech is voted down, the government will fall and Canadians will go to the polls to decide which party is best able to ensure a strong economic recovery.