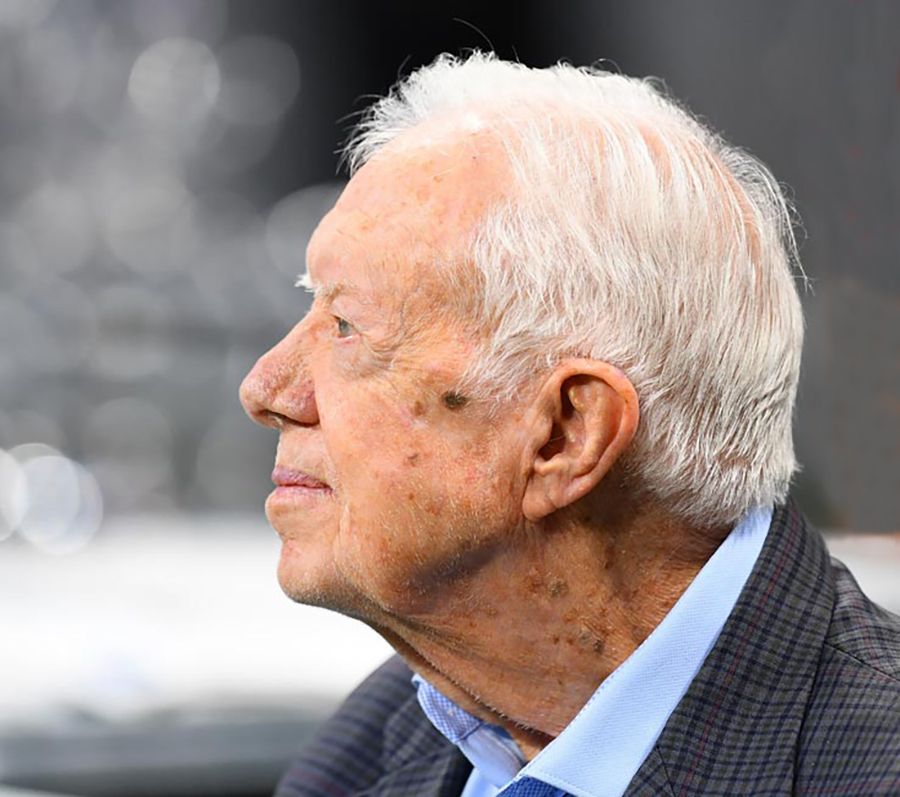 Former president Jimmy Carter prior to the game between the Atlanta Falcons and the Cincinnati Bengals at Mercedes-Benz Stadium on September 30, 2018 in Atlanta, Georgia. (Photo: Scott Cunningham/Getty Images)

Former U.S. President Jimmy Carter turns 96 today and, as presidential politics go, he couldn’t be any different than the current White House occupant. In contrast to Donald Trump’s cultivated New York billionaire businessman image, Carter grew up in Archery, Georgia, working as a peanut farmer as a teenager, riding out the Great Depression and later living in public housing before making a political run and landing, in 1977, at 1600 Pennsylvania Ave.

And while Carter’s quiet humility and tireless charity work — including with Habitat for Humanity — puts him in stark contrast with the blustering back and forth attacks of today’s political climate, he still has one foot in the American political fray. Earlier this week he endorsed Democratic challenger Rev. Raphael Warnock for the U.S. Senate race. Warnock, of course, is running in Georgia — a state where Carter himself served as governor from 1971 to 1975.  Just days after President Obama endorsed Warnock, Carter added his endorsement and noted, “During these difficult times, our nation must continue to march towards progress while holding fast to our American values of equality, justice and economic opportunity for all. Reverend Warnock knows the struggles Georgians are facing in this unique crisis — families losing health care, shuttered rural hospitals and record unemployment — all in the middle of a pandemic.”

So in honour of Carter’s 96th birthday, we’re revisiting our 2019 profile of the beloved former president.

Jimmy Carter, who has had the longest and most successful post-presidency in the history of the United States, turns 95 today. The 39th and the oldest living former president is still in the political fray, having called out President Donald Trump, America’s 45th, as “illegitimate, “saying his “re-election would be a disaster.”

Carter recently roiled the 2020 campaign of one of the Democratic party’s leading contenders, former vice-president Joe Biden, by saying that 80 is too old to serve as president and there should be an age limit — to go with the age-entry minimum of 35 — on the office. Biden, who at 77 would be the oldest president ever if he won, has been bedevilled by rumours of cosmetic enhancements and questions about his stamina and memory. For all Biden’s repeated misstatements and constant word salads, questions of cognitive decline also follow Trump, 73 , putting age on the ballot in a way that Carter will approve.

As American and foreign government officials curry favour by spending on Trump-owned properties and White House senior adviser and first daughter Ivanka Trump mints patents in China, its seems a long way from the Georgia peanut farm Carter put into a blind trust after his 1976 election. Following the acrimony of Watergate and Ford’s pardon of Nixon, voters wanted an outsider unversed in the ways of Washington.

But long gas lines at home and a downed helicopter in an Iranian desert — a failed rescue attempt of an American hostage— were the death knell of Carter’s re-election, making him a one-term president and allowing Reagan, America’s glamorous cowboy, to ride into town.

Compare this to Carter’s scandal, when he told Playboy magazine in 1976 that he had “committed adultery in my heart many times,” but that “God forgives me for it.” He has been married to his wife Roslyn since 1946, who no doubt wishes her husband a very happy birthday, as we do. Read on for our March 22, 2019 tribute to Jimmy Carter the day he became the oldest living president.
— Irma Bay

Jimmy Carter Is Now the Longest Living U.S. President in History — What’s the Secret to His Long Life?

Although he may be regarded by many, perhaps unfairly, as an ineffective leader, nearly everyone acknowledges that former U.S. President Jimmy Carter is a wonderful human being.

Nearly everyone, that is, except, perhaps Carter himself.

Unfailingly modest, he’d probably prefer to be celebrated as a “decent” human being.

He’s being celebrated today, at the age of 94 years and 172 days, as the oldest living former president, overtaking by one day the record set by George H.W. Bush.

How has he achieved this longevity and the accolades of decency, a rare quality in a politician and U.S. President?

It may well be that the longevity and the decency are connected.

Carter has led a post-White House life of 38 years that is remarkable not only in its selflessness, spirituality and service but also in its simplicity and rootedness.

These may be old-fashioned values in today’s world of greed and striving for status and wealth, but they tick all the boxes for living a long and contented life.

Carter has lived in the same house in Plains, Georgia since 1961, less than a half-mile from the house where his parents lived.

He’s often out on the fields of the peanut farms that have been in his family for 100 and 150 years.

He’s been married to the same woman for 73 years. Rosalynn Carter is 91.

“He and Mrs. Carter take walks, and they have followed a healthy diet for a lifetime,” a Carter Center spokesperson told CNN.

His life has not been without setbacks.

He lost his bid for re-election in 1980 to Ronald Reagan and suffered the embarrassment of being a one-term president. His presidency was marred by inflation, a scarcity of fuel at gas stations and censure for not being tough enough with military action during the Iran hostage crisis.

But as he pointed out later, the hostages were safely returned (thanks to Canada) without any loss of life to Iranian civilians as there would have been if he had resorted to sending in troops.

Also, he survived a melanoma that had spread to his liver and brain. It was diagnosed in 2015 but has been in remission since 2016 after he underwent surgery, radiation therapy and  immunotherapy.

Certainly, the exercise and healthy diet he’s had throughout his life have contributed to his longevity.

But it’s equally important as the years climb to continue to engage with the world, to be surrounded by friends and family, to have purpose and challenges.

Through the Carter Center, the former president has maintained an active and prominent role as a philanthropist. He’s taken on causes around the world that other charities have overlooked.

“I have a vigorous life,” he told the BBC  in 2005, when he was merely 80 years old. “We have a lot of fun in our family. I’m a good athlete still and I have a vibrant career at the Carter Center. I’m writing my 20th book and, I’ve become an artist in my later years. I’ve enjoyed that challenge.”

“This is normal life for us, We have a very strong and deep religious life. We go to church every Sunday and I teach Sunday school.”

“I have a wonderful workshop where I build furniture. I’ve built 150 pieces since I left the White House. I donate one piece a year to the Carter Centre to auction off at a fundraising event.”

“This is my life: making a few pieces of furniture, taking care of our farms, painting a portrait now and then…

“As I pass additional years, my hope is I can spend more and more time here in Plains where I feel as if I belong.”

Perhaps in a nutshell, a peanut shell, Carter has the one word secret to a long, happy, productive life:  Belong.

This story originally ran in 2019.

5 “Hair-Raising” Takeaways From Trump&#8217;s Income Tax History as We Head Into the First Presidential Debate